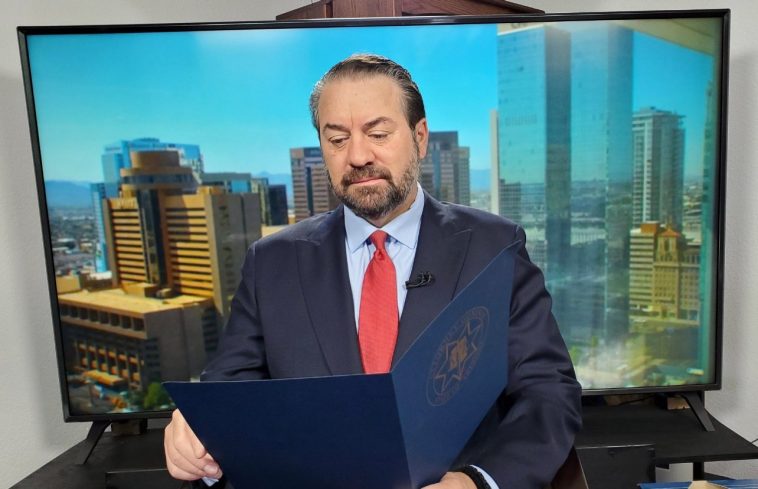 Arizona Attorney General Mark Brnovich has opened a formal criminal investigation into the fraudulent 2020 election and his office is now examining the suspects.

The Gateway Pundit reported that Mark Brnovich is still awaiting the router and Splunk log analysis but he is digging deeper to “hold people accountable for breaking the law”, according to Arizona Senate President Karen Fann.

The Arizona audit proved that election laws were violated and as a result, hundreds of thousands of ballots are now in question.

The citizen-led canvass of Maricopa County voters revealed there were hundreds of thousands more “ghost votes and lost votes.”

This was all in Maricopa County, alone. Joe Biden was declared the winner of Arizona by a margin of fewer than 10,500 votes.

“Maricopa At Its Worst Literally Should Be Decertified, At Its Best Could Easily Be Redone.” Jovan Pulitzer Discusses 700,000 Ballot Issues In Arizona

All of these election determining discrepancies have been denied since election day, all while they threw the stolen election in our faces and declared it was the “most secure election in American history.”

#AZAudit
I read it, so you don’t have to. Looks like Brno’s office is moving forward. Fontes has recently been “interviewed”. pic.twitter.com/H4AgfN0lyq

The interview, Fontes told The Arizona Republic, is unlike any briefings he had with law enforcement officials during his four years as recorder, and did not suggest he was the target of a criminal probe. Fontes is a lawyer and a former member of the Attorney General’s Office who is seeking the Democratic nomination for Secretary of State next year.

Last week, attorney general officials told The Republic it had not received any written complaints of election fraud from the Trump campaign, Trump’s lawyer, or key figures from his reelection campaign. Officials did not respond when asked repeatedly whether the office had received any verbal requests.

The investigators seemed to be taking up issues raised by Cyber Ninjas, the Florida-based company that conducted the ballot review for the Senate, Fontes said.

“They are going down the Cyber Ninja rabbit hole,” Fontes said afterward. He added, “It’s incredibly troubling that a prosecutor would send two agents out to try to bolster the ‘Big Lie,’” a reference to Trump’s unfounded assertions that widespread fraud led to his loss against Democrat Joe Biden.

In an email seeking time with Fontes, Geisler said he “would like to know about the election preparation and execution. What some of the difficulties were and what worked well.”

Investigators questioned Fontes about some of the questions raised during the ballot review of 2.1 million ballots in Maricopa County from the 2020 election and zeroed in on the timing of archiving for computerized election records. Fontes said they did not seem to understand the basics of election administration.

In a letter to Brnovich on Sept. 24, Fann said there were several “urgent issues” that needed to be followed up on. Those included the signature verification process for absentee ballots, the maintenance of voter rolls, election technology and machinery, and preservation of election-related information to be used for future audits, if warranted.

“It’s incredibly troubling that a prosecutor would send two agents out to try to bolster the ‘Big Lie,’” https://t.co/Y5MokDZoav

This is a statewide investigation and we may see a more thorough investigation into Pima County, where multiple precincts had over 100% voter turnout and 35,000 possibly fictitious votes were discovered.

The ball is rolling in Arizona.