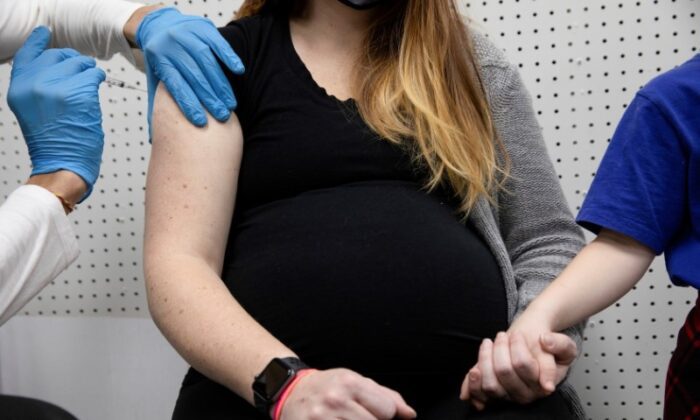 100 Percent Fed Up – After re-analyzing a study performed by Centers for Disease Control and Prevention (CDC) researchers, a peer-reviewed study has called for the “immediate withdrawal of mRNA COVID vaccines for pregnant women, those breastfeeding, those of childbearing age and children after their shocking study reveals stunning results of pregnant mRNA vaccinated women: 92% of the women had a spontaneous miscarriage in the first 13 weeks…while 81.9% of women who received the mRNA COVID vaccine had a spontaneous miscarriage in the first 20 weeks.

The study warns that the conclusions of the Shimabukuro study that support the use of the mRNA vaccine in early pregnancy, which has now been hastily incorporated into many international guidelines for vaccine use, ignores the horrors of thalidomide, a drug commonly taken by pregnant women in the late ’50s and early ’60s to prevent nausea during pregnancy. Thalidomide ended up causing severe birth defects in thousands of children, including scores of children being born without limbs

The use of mRNA vaccines in pregnancy is now generally considered safe for protection against COVID-19 in countries such as New Zealand, USA, and Australia. However, the influential CDC- sponsored article by Shimabukuro et al. (2021) used to support this idea, on closer inspection, provides little assurance, particularly for those exposed in early pregnancy. The study presents falsely reassuring statistics related to the risk of spontaneous abortion in early pregnancy, since the majority of women in the calculation were exposed to the mRNA product after the outcome period was defined (20 weeks’ gestation).

In this article, we draw attention to these errors and recalculate the risk of this outcome based on the cohort that was exposed to the vaccine before 20 weeks’ gestation. Our re-analysis indicates a cumulative incidence of spontaneous abortion 7 to 8 times higher than the original authors’ results
(p < 0.001) and the typical average for pregnancy loss during this time period. In light of these findings, key policy decisions have been made using unreliable and questionable data. We conclude that the claims made using these data on the safety of exposure of women in early pregnancy to mRNA-based vaccines to prevent COVID-19 are unwarranted and recommend that those policy decisions be revisited.

We question the conclusions of the Shimabukuro et al.[4] study to support the use of the mRNA vaccine in early pregnancy, which has now been hastily incorporated into many international guidelines for vaccine use, including in New Zealand.[1] The assumption that exposure in the third trimester cohort is representative of the effect of exposure throughout pregnancy is questionable and ignores past experience with drugs such as thalidomide.[38] Evidence of safety of the product when used in the first and second trimesters cannot be established until these cohorts have been followed to at least the perinatal period or long-term safety determined for any of the babies born to mothers inoculated during pregnancy. Additionally, the product’s manufacturer, Pfizer, contradicts these assurances, stating: “available data on Comirnaty administered to pregnant women are insufficient to inform vaccine- associated risks in pregnancy”, and “it is not known whether Comirnaty is excreted in human milk” as “data are not available to assess the effects of Comirnaty on the breastfed infant” (page 14).[39]

Pfizer, it was noted, says on its vaccine’s label that the available data on the vaccine “administered to pregnant women are insufficient to inform vaccine-associated risks in pregnancy.”

Due to the nature of the mRNA vaccine roll-out, healthcare providers need to report any issues in pregnancy to further determine the safety of this product. Caution should be exercised in the administration of vaccines in pregnancy, as indicated by the possible association between the exposure to influenza vaccines containing H1N1pdm09 (2010–11 and 2011–12) and spontaneous abortion.[40] Considering the evidence presented here, we suggest the immediate withdrawal of mRNA vaccine use in pregnancy (Category X)[41] and those breastfeeding, alongside the withdrawal of mRNA vaccines to children or those of child-bearing age in the general population, until more convincing data relating to the safety and long-term impacts on fertility, pregnancy and reproduction are established in these groups.

Editor’s Note 1: This report was peer-reviewed by reviewers not affiliated with the authors. The process was single-blinded (the authors do not know who the reviewers are).

Editor’s Note 2: On June 24, 2021, Dr. Shimabukuro also presented data from the Vaccine Safety Datalink to the US Advisory Committee on Immunization Practices (ACIP) and concluded that the system captured no (zero) serious adverse events or deaths that could be attributed to the COVID-19 vaccine. On June 10, 2021, Dr. Shimabukuro reported no increased risk of myocarditis using data from the VSD to the Vaccines and Related Biological Products Advisory Committee (VRBPAC). Soon after these presentations, US FDA issued an advisory on the risk of myocarditis and pericarditis from the Pfizer/Biontech Bnt162b2/Comirnaty vaccine.The information present to ACIP was critical in their decision on vaccine recommendations. I have addressed the absence of and failure of “pharmacovigilance” in a recent Editorial in this journal.

The study, though, was corrected last month after concerns were raised by a researcher in Belgium. The CDC scientists acknowledged they should have made clear that they could not accurately calculate a risk estimate for miscarriages because follow-up data was not yet available for most of the women.

The correction resolved some of the issues, but there are still more, according to Dr. Simon Thornley, a senior lecturer in the University of Auckland’s Section of Epidemiology and Biostatistics, and Dr. Aleisha Brock, another researcher in New Zealand.

The CDC researchers concluded their findings didn’t show any obvious safety signals among pregnant women who received the Pfizer or Moderna vaccines. They said their findings did not necessarily represent the position of the CDC, but the agency links to the study on its website and used it to promote vaccination in pregnant women, and a query sent to the study’s main author was forwarded to a CDC spokeswoman, who pointed to an August statement regarding the study.

“We are aware that some of the data has been used to calculate a higher rate of miscarriage. This is not an appropriate calculation based on the data available because more than 1,000 pregnancies were ongoing, and their outcome data was not available at the time of the report. About 10–25 [percent] of known pregnancies end in miscarriage. CDC experts will continue to study the effects of COVID-19 vaccination on pregnancies and closely monitor any safety concerns,” the agency said at the time.

The spokeswoman also referred to two research letters regarding pregnant women and COVID-19 vaccines that have since been published. One was from CDC researchers who said the estimated risk of miscarriages following vaccination was within the range of miscarriages that actually occur. The other, from outside researchers, studied CDC data and reached a similar conclusion.

The CDC recommends pregnant women get a COVID-19 vaccine, with few exceptions.

Thornley is not so sure. He said the studies do show no increased risk in getting the vaccine, but there are some questions regarding the selection of participants.

“There are at least some questions related to the selection of participants which are an issue for case-control studies, compared to a cohort analysis such as that found in the CDC data. The data which addresses this issue of safety, particularly with regard to exposure to mRNA vaccines early in pregnancy, is sparse, from published evidence, and I would question anyone who believes it is in any way conclusive,” he told The Epoch Times.

“Since the risk of fatality or severe outcome following COVID-19 infection is generally extremely low for younger people, including those who are pregnant, we caution against the use of the vaccine, given the substantial uncertainty that exists,” he added.

Morning shows on major networks like Good Morning America, who notoriously push propaganda for the Left featured a piece in February 2021 on a clinical trial by Pfizer used to study pregnant women who get the COVID jab.

Eight months later, the CBS Morning show began to help the CDC with their push for pregnant women to get the COVID jab. In their segment, they feature a pregnant mom who died of COVID.

It would be great if there was a central source for factual information that isn’t tainted by political opinions and government agencies or elected leaders, including those who benefit from financial contributions made to them by big pharma that stands to make billions on the production and sale of their COVID vaccines. No wonder Americans no longer trust our government or the DNC’s corporate media.