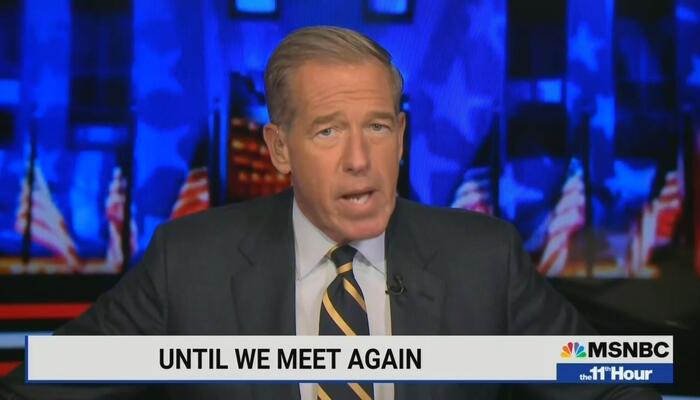 Brian Williams signed off late Thursday night for the final time after 28 years between MSNBC and NBC, claiming on The 11th Hour that he’s “not a liberal or a conservative,” but “an institutionalist” fearful of “the darkness…has spread” across America while equating Trump supporters to arsonists and murderers that frighten him as “an aging volunteer fireman.”

Saying he only has “regrets” that are “too few to mention,” the scandal-ridden journalist compared himself to George Bailey as, before and during his final show, he was inundated with “lovely testimonials” that referred to him as “a gift to the country” filled with “grace,” “integrity,” “kindness,” “smarts,” “wisdom,” and “wit.”

First, the farewell. Williams said he was “jump[ing] without a net into the great unknown” of unemployment “[a]fter 28 years of peacock logos on much of what I own,” but his “biggest worry” is “for my country.”

Following his cartoonish claim about his political tilt and “yield[ing] to no one,” Williams offered what was a blatant, broad smear of the right, calling them “the darkness on the edge of town” that’s “spread to the main roads and highways and neighborhoods, the local bar, the bowling alley, the school board and the grocery store.”

Demanding they “be…answered for,” Williams attacked voters for having sent to Congress people who’ve “decided to join the mob…to burn it all down with us inside.”

“That should scare you to no end as much as it scares an aging volunteer fireman,” he added.

The second portion of his farewell was more straightforward as he thanked his colleagues, family, friends, and guests as, without the last group, he’d “be staring into the camera for an hour, five nights a week and nobody wants to see that.”

Part three was a brief and pitiful acknowledgment of his massive flaws: “As a proud New Jersey native, this is where I get to say, regrets? I’ve had a few. But, then again, too few to mention.”

He then hit the homestretch with the George Bailey comparison, another lament about America, a promise he won’t stay “silent” for long, and another thank you to viewers (click “expand”):

What a ride it’s been. Where else, how else was a kid like me going to meet presidents and kings and the occasional rock star. These lovely testimonials that I can never truly repay make me hyperaware that it has been and remains a wonderful life. It’s as if I’m going to wake up tomorrow morning in Bedford Falls. The reality is, though, I will wake up tomorrow in the America of the year 2021, a nation unrecognizable to those who came before us and fought to protect it, which is what you must do now. My colleagues will take it from here.

I will probably find it impossible to be silent and stay away from you and lights and cameras after I experiment with relaxation and find out what I’ve missed and what’s out there. Every weeknight for decades now, I’ve said some version of the same thing: Thank you for being here with us, us meaning the people who produce this broadcast for you. And you, well, without you, there is no us. I’ll show myself out. Until we meet again, that is our broadcast for this Thursday night. Thank you for being here with us. And for all my colleagues of the networks of NBC News, good night.

Williams began the show with — what else — January 6 and he successfully kept it all business for an ironic 11 minutes before Deadline: White House host Nicolle Wallace broke the ice.

Calling it “bittersweet” to be on his last show, Wallace said his “contributions are too many to number” and everyone will be “missing something” without him.

After Williams replied that he was “gamely trying to get control of the rudder again,” The Washington Post’s Phil Rucker answered his “news question” about January 6, but Rucker too thanked him.

Saying he hosted “an hour of calm” amid what’s “been such a turbulent, traumatic period for all of us in the country, for all of us in journalism,” Rucker boasted Williams did so because of “the integrity and the smarts and, frankly, the wit and grace that you bring[.]”

Post colleague Eugene Robinson also took a stab, gushing that Williams “created…a show that’s really kind of about the human comedy…of life” while “always leav[ing] viewers knowing a lot more about their nation and their world.”

In the next block, James Carville joined the show in a bright red shirt and LSU-themed Santa hat and toasted him with a glass of champagne for the “great time we’ve had.”

As for Williams’s final guests, he brought in far-left presidential historians Michael Beschloss and Jon Meacham and, in the case of the former, he appeared to have read a prepared speech.

Taking up most of a block, Beschloss said Williams “made this country better” by giving Americans a nightly “course in civics and democracy” while “[speaking] truth to power in the best democratic tradition.” Bleh.

Beschloss also announced he was sending him a gift (click “expand,” emphasis mine):

The genuine national emergency is that Brian Williams is leaving The 11th Hour. So, let me just say my piece, then we’ll get on to democracy. Two such things are connected. Brian, as historians we know tonight you’ve had an astounding 28 years at NBC News. Very difficult to believe. That’s more than a quarter of the history of the NBC — National Broadcasting Company, more than a third of the length of serious TV news. So, this is a large monument to what you do, my friend and viewers who are watching, we’ve all watched, Brian, for all these years, the intelligence, wisdom, the kindness, the more than sense of humor, and especially these last five years on The 11th Hour at a time of horrible troubles, a nightmare often times for our country. Brian, you made this country better at a time we all needed it. Every single night, this has been a course in civics and democracy, in some cases, for people who didn’t really know how precious and how fragile it was. Every single night, you spoke truth to power in the best democratic tradition.

Now, everyone knows how much Brian loves history. Certainly Jon and I do. You may not know that he collects historical artifacts and letters. Anyone who’s watched this program or watched him not only for 28 years, but he was doing other things before he came to NBC, knows that Brian loves the history of presidents, loves the history of cars, and he loves the history of important anniversaries. Now, someone may have noticed that the week he chose to end his run here at The 11th Hour at NBC is the 80th anniversary of Pearl Harbor, I’m sure completely by coincidence, but my gift for you tonight — I thought I would look for something appropriate, president and cars and anniversaries — I’m sending you tomorrow this exact scale model of Franklin Roosevelt’s limousine, 1938. As you can see, the hood opens. The doors open. This is pretty exact. Even the seats go up and down. You’ll be getting that from me soon, Brian, as an addition to your excellent collection. All I can say is, before we get to the serious — more serious stuff about democracy and the troubles we’re having, thank you from all of us grateful Americans and I know I speak for Jon in saying we can’t wait to watch your next chapter as it now opens.

Though not as lengthy, Meacham fawned over his friend, calling him a “fantastic” person who’s “been” and “will continue to be a gift to the country.”

Going to a break (and prior to a video tribute), he told viewers that the three liberals would be “hav[ing] a weekend together” and he wasn’t sure “whether the History Channel or Comedy Central should be here” although “it would make a dandy documentary.”

Williams’s final show on a peacock network was brought to you by advertisers such as Casper, Instacart, Qunol, ServPro, and Volvo. Follow the links to see their contact information at the MRC’s Conservatives Fight Back page.

To see the relevant MSNBC transcript from December 9, click here.