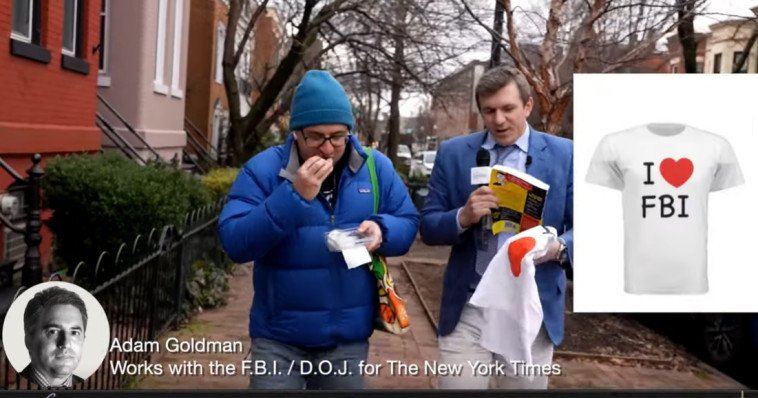 James O’Keefe and his Project Veritas were targeted by the Deep State FBI.  The FBI’s accomplice was New York Times reported Adam Goldman.  O’Keefe caught up with Goldman and released the video of his encounter this week.

The Conservative Treehouse reported on O’Keefe’s confronting Goldman from the New York Times:

Adam Goldman is a man of notoriously slimy disposition, who operates as a New York Times stenographer for the administrative state.  Goldman loves to see the targeting of Americans by the DOJ and FBI apparatus and is intoxicated by his perceived assistance in the destruction of others.  Goldman genuinely gets pleasure in seeing his targets suffer under the weight of the U.S. justice system. It brings him joy.

After Adam Goldman and the DOJ/FBI worked together in the operation to target James O’Keefe (Ashley Biden diary), O’Keefe is dragging the relationship out into the open. Goldman does not like it when the tables are turned, and he becomes the target of sunlight.

TRENDING: HERE IT IS – THE SMOKING GUN: The 20 Point Email of Classified Information from His Father that Hunter Biden Sent to Burisma Board Member in April 2014

During the entire interview, it looked like Goldman had food in his mouth.  He was visibly upset to be put in the uncomfortable situation and he definitely was not going to admit working with the Deep State to take down O’Keefe and Project Veritas.

O’Keefe was raided by the Deep State FBI.  It was in reference to the Ashley Biden diary.  The Gateway Pundit reported on this raid at the time.

It turns out O’Keefe found out Goldman worked closely with the Deep State FBI to target him.