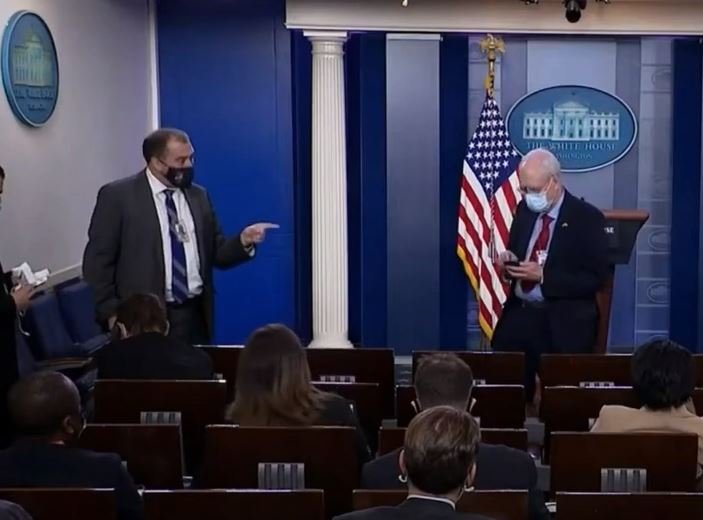 The Gateway Pundit wrote about Dr. Anthony Harper in September during the fall of Afghanistan and the thousands of stranded Americans on the ground there.

Dr. Harper is an investigative journalist with the InterMountain Christian News and Israel news service ‘Newsrael.’ In September Dr. Harper described how the Biden White House press office started giving him a hard time by restricting his access to the Press Secretary Jennifer Psaki’s office after he started asking difficult questions on Biden’s historic disaster in Afghanistan.

Dr. Harper, who has been reporting from the White House for several years, now must have an escort before he addresses Jen Psaki in her office.

Now Dr. Anthony Harper is being pressured by the White House and liberal media inside the room to be vaccinated against his will.

Earlier today at the White House briefing room Dr. Harper was harassed for not being vaccinated. Here is the transcript:

Brian Karem: Six feet Anthony. You’re not vaxxed. I love you but….

Dr. M. Anthony Harper: I feel like I need to have a Yellow star on.

Brian Karem: No. That would equate this with the Holocaust. I’m asking you to treat everybody sensibly, not burn them or put them in an oven (He is shifting the blame here and accusing Dr. Harper of being AntI-Semitic). That’s a crazy analogy, you shouldn’t adopt that, you’re better than that.

Dr. M. Anthony Harper: ….A lot of Christians in America know what is going on here.

Brian Karem- I’m a Christian in America. Don’t preach to me. Get vaccinated.

At least he didn’t start screaming.

Brian Karem is an American journalist and author working as the White House correspondent for Playboy and a political analyst for CNN.

Dr. M. Anthony Harper is a White House investigative journalist with the InterMountain Christian News and NEWSRAEL reporting on Anti-Semitism and other Human Rights violations.

Watch his YouTube channel at the following link:
https://youtube.com/channel/UC03YA0kmL6K_OytBOdMCdWw