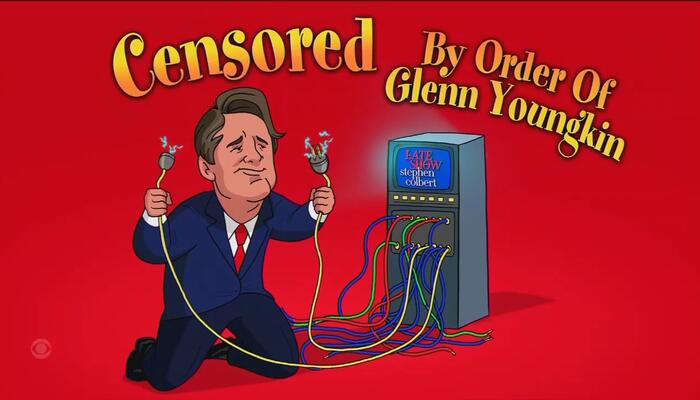 The show led with a cold open in the form of a soundbite from Saturday’s American Voices on MSNBC with host Alicia Menendez insisting Youngkin’s anti-Critical Race Theory views are part of a movement that’s called for “the banning of books, fiction and nonfiction, that delve into issues of race and so much more.”

Of course, nowhere in that clip or on Colbert’s show was the inclusion of material parents have deemed sexually explicit and arguably pornographic.

A voice-over announcer took over from there: “Looking to learn about American history that doesn’t make you feel bad? Time Life Books presents The Glenn Younkin Collection.”

Ah, yes. The Joy Reid strawman that conservatives want to ban books that paint white people in a poor light.

The ad promised, by buying into this fake collection, you’d “receive a new Youngkin-approved text which avoids addressing racial inequality.”

Halfway through listing eight renamed books (including To Thrill a Rocking Bird instead of To Kill a Mockingbird), the announcer added yet another strawman of his before teeing up four more fake titles: “You and your children will love learning that racism is over, and there’s no reason to think about it anymore.”

The ad eventually ended with this snarky jab: “So start avoiding addressing racism today, with the Time Life Glenn Youngkin Collection. Remember, those who don’t know history are doomed to be governor of Virginia.”

Skip ahead to partway through Colbert’s monologue as he denounced the newly-minted governor as having been “sworn in as The Penguin,” which was an intriguing thing to say given the fact that Youngkin’s attire was identical to those worn by predecessors, including Democrats of Colbert’s party, like Tim Kaine, Terry McAuliffe, Ralph Northam, and Mark Warner.

Colbert turned his attention to CRT, lamenting that Youngkin banned something that’s “not taught in Virginia schools” even though banning said thing that doesn’t exist would mean “history class” would be banned.

He started to explain how, after the inauguration, Youngkin went back to the governor’s mansion, but he was promptly cut off by a cartoon graphic with Youngkin pulling out power cords for a screen accompanied by a graphic reading, “Censored By Order of Glenn Youngkin.”

To cheers and applause from the liberal audience, Colbert lamented that Youngkin “headed over to Fox News Sunday” a day later “and used Martin Luther King to defend his anti-knowledge agenda.”

Youngkin merely talked about the importance of judging others based on their character and not solely race, but the race-obsessed Colbert wasn’t having it and pulled out an MLK quote of his own that painted white people as uninterested in racial harmony.

The hyenas in the audience ate it up, cheering as he wrapped by saying MLK’s supposed views of white people will be Youngkin will try to “stop” the “teaching” of MLK in schools.

Let’s go to the text from Saturday’s inaugural address for an example of what Youngkin’s actually said about race (click “expand”):

Today we stand together on behalf of Virginians who’ve never lost faith, even when they have suffered loss. Of Virginians who have not stopped dreaming of a better life, even in the midst of trials and tribulations.

We must venture forward because a new and better day is ahead of us. After all, we are Virginians whose leaders gave birth to the most exceptional nation the world has ever known. Yes a country with chapters of great injustice. But also a country birthed on the fundamental notion of freedom. That we’re all endowed by our “Creator with certain unalienable Rights, that among these are Life, Liberty and the pursuit of Happiness.”

A nation whose ideas and ideals have been replicated and memorialized around the globe for nearly 250 years. And Virginians have led boldly from our founding — Washington, Jefferson, Madison, Monroe and our very first governor, Patrick Henry, who insisted on adding the Bill of Rights to the Constitution to protect our individual liberties. This is our lineage. And following generations carried that mantle, leading and serving as Virginians are called to do.

No one alone and certainly not a governor can ensure an entire commonwealth can live up to its promise. But one Virginian at a time one act of service and sacrifice at a time we can make this Virginia we love stronger and better for all who live here.

Dr. Martin Luther King, Jr., whose birthday we celebrate today and whose great life we celebrate Monday with a national holiday once said, “We may have all come on different ships, but we’re in the same boat now.” For us that boat is named Virginia, and today we set sail to a new and better day.

Since the founding of Jamestown a little more than 400 years ago we’ve been an imperfect people on the course to a more perfect union. At times we’ve failed to live up to our ideals. But we all want to do what is right and what is morally just even if we fall short. What is seared in our heart by a loving, almighty Creator is not a desire for power or conquest, not a love of self, or personal advancement. Rather it’s a belief that life is worth living when we serve a greater cause than self when we love without expecting favor in return and when we set aside ego for the greater good. We are one Virginia. We are all sailing in the same boat.

CBS’s erroneous claims about conservatives wanting to ban history was made possible thanks to the endorsement and support of advertisers such as Amazon, Apple, Liberty Mutual, Nissan, and Starbucks. Follow the links to see their contact information at the MRC’s Conservatives Fight Back page.

ALICIA MENENDEZ [on MSNBC’s American Voices, 01/15/22]: Virginia has a new governor, Glenn Youngkin, the Republican wasting no time acting on campaign promises, signing an executive order to keep what he calls CRT, critical race theory, out of Virginia schools. [SCREEN WIPE] Attacking CRT having a ripple effect across the country, including the banning of books, fiction and nonfiction, that delve into issues of race and so much more.

ANNOUNCER: Looking to learn about American history that doesn’t make you feel bad? Time Life Books presents The Glenn Younkin Collection. [LAUGHTER] Each week, you will receive a new Youngkin-approved text which avoids addressing racial inequality, like A Raisin in the Fun, To Thrill a Rocking Bird, 12 Beers a Dave, and I Know Why the Caged Bird Sings Karaoke. [LAUGHTER] You and your children will love learning that racism is over, and there’s no reason to think about it anymore. Other titles include The Color Urkel, The Autobiography of Malcolm X-Men, Roots, Turnips, Beats, and Other Root Vegetables, and even The Complete Works of Tony Morrisoni.

TONY MORRISONI: Hi, I’m Tony Morrisoni, and you will get all my stuff — like Beloved, that’s about my ex-girlfriend Gina. Point is, take me back, Gina. I’m running out of words to say I’m sorry for kissing Angela.

ANNOUNCER: So start avoiding addressing racism today, with he Time Life Glenn Youngkin Collection. Remember, those who don’t know history are doomed to be governor of Virginia.

COLBERT: Another person who has a strange way of celebrating Martin Luther King Day is incoming Virginia governor Glenn Youngkin, seen here — [BOOS] — after being sworn in as The Penguin. [LAUGHTER] On his first day in office, Youngkin signed 11 executive actions, including one ending critical race theory in schools, which, for the record, is not taught in Virginia schools — [LAUGHTER] — but that Youngkin categorizes as any “school lessons that define racism as an institutional problem deeply embedded in American society.” So, history class. After signing it, Youngkin returned to the executive mansion in Richmond that was built in 1813 by —

COLBERT: — okay. The next day, Youngkin headed over to Fox News Sunday and used Martin Luther King to defend his anti-knowledge agenda:

GOVERNOR GLENN YOUNGKIN (R-VA) [on Fox News Sunday, 01/16/22]: And the immortal words of Dr. Martin Luther King ring in our ears that we must judge one another by the content of our character and not the color of our skin. This is what will be the founding principle of our executive order, what we’re gonna do in Virginia schools.

COLBERT: You think Martin Luther King’s message to America is, “don’t teach children about racism?” Well, let’s see if he agrees. King said, “whites, it must frankly be said, are not putting in a similar mass effort to re-educate themselves out of their racial ignorance. It is an aspect of their sense of superiority that the white people of America believe they have so little to learn.” [CHEERS AND APPLAUSE] Wow. [CHEERS AND APPLAUSE] You know what that sounds like? You know what that sounds like? That sounds a lot like critical race theory. Glenn Youngkin should stop them from teaching about that guy in Virginia schools, but it’s not just your votes Republicans don’t want to count. It’s also you. We just found out that census officials wrote a memo in 2020, complaining of “‘unprecedented’ meddling by the [former President’s] administration in the 2020 census.”