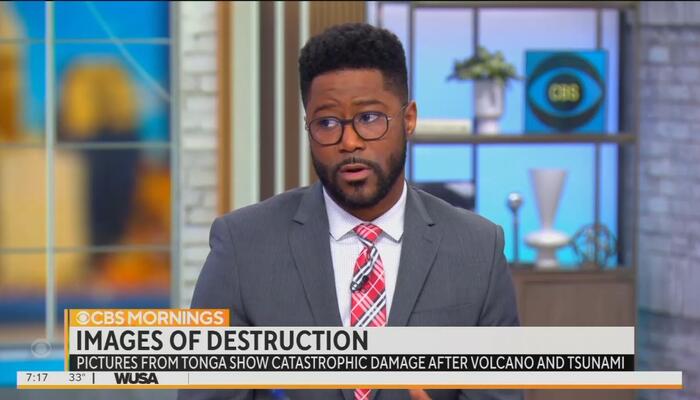 CBS Mornings co-host and former NFL player Nate Burleson took the climate change narrative to a whole new level as, during Wednesday’s show, he cited the “harsh reality” of climate change and the need for all of us “to do our part” as it relates to the January 14 volcanic eruption and tsunami that hit the Pacific island nation of Tonga.

To repeat: A network journalist — who makes millions — tied a volcanic eruption and subsequent tsunami to climate change. Worse yet, he even claimed they’ll become “more frequent.” And, when called out, he denied having said something untrue and may have copy-pasted the first result from Google Images of “volcano climate change.”

But, first, what he said. Co-host and Democratic donor Gayle King opened the extended brief by showing two sets of before and after satellite images, adding “[t]elephone communication…is slowly starting to return” with the country “[c]overed in a thick coat of volcanic ash” while “[t]hree of its smaller islands suffered serious damage from tsunami waves that reached almost 50-feet high.”

Remarking how “that is high,” co-host Tony Dokoupil explained that’s the height of “a five-story building” and, from there, Burleson unspooled his erroneous claim: “You know, we often times talk about climate change quite a bit. These stories are a harsh reality of what we’re going through and we have to do our part because these are more frequent.”

King did nothing to push back, saying “yes” and then “yep” while he spoke. For his part, Dokoupil replied: “Yes. Yeah and if you’re on the west coast, the clock is ticking on the big one. People are worried.”

After King said she “saw some stuff over the weekend that was very troubling” about that, the back-and-forth ended on a positive note as Burleson said: “We do know they need help to recover.”

Just over an hour after video of his false claim was tweeted, Burleson responded: 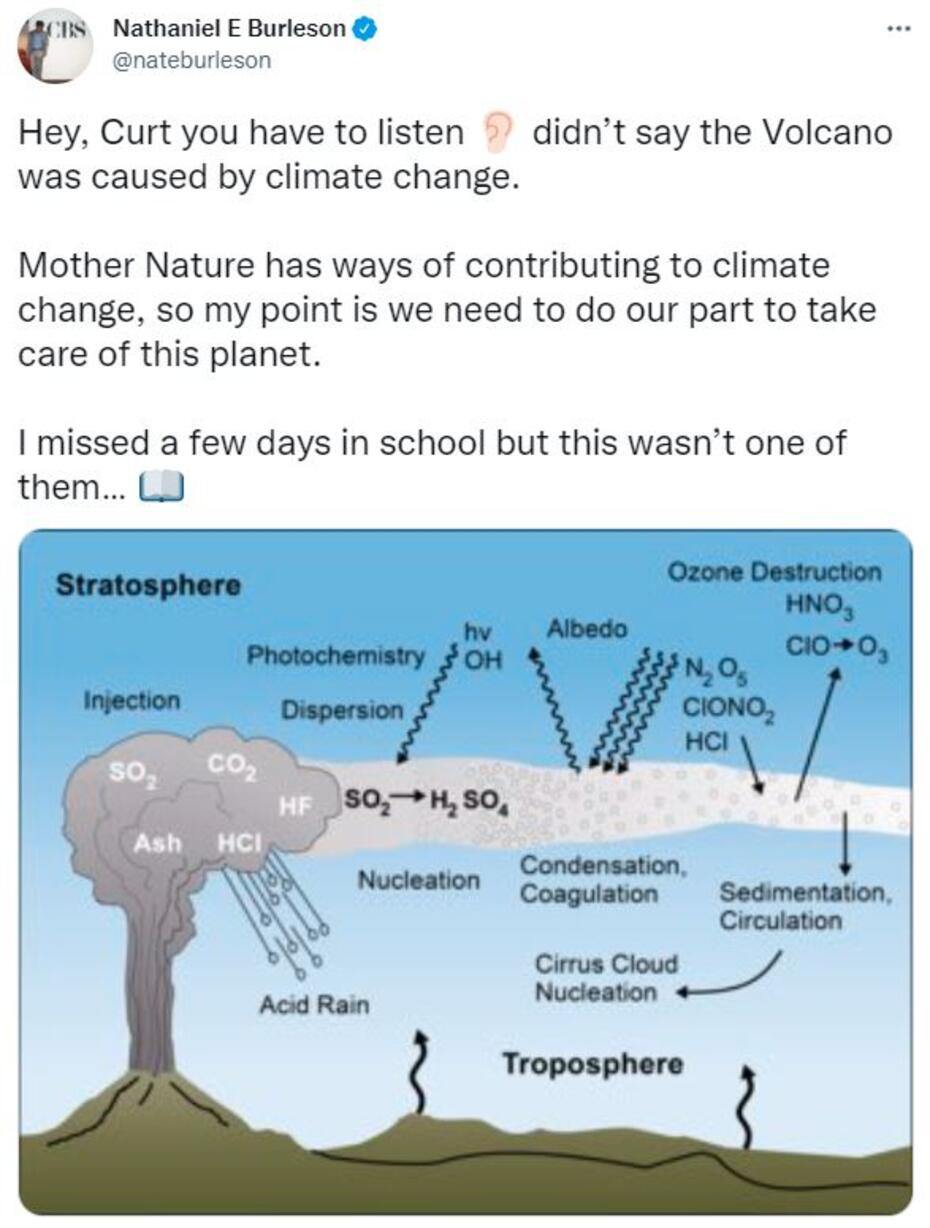 That, of course, is also a lie. Between the recap we’ve provided, transcript below, and video above, you be the judge.

But also, check out the Google Image search results for “volcano climate change” and how Burleson used the first image available without having read the accompanying U.S. Geological Survey article explaining how eruptions affect our climate, not the other way around.

Later in the show, actor Bill Murphy and cellist Jan Vogler joined the crew to discuss their new documentary New World: The Cradle of Civilization and Murray took a dig at Burleson as a novice in the news profession compared to Dokoupil and King (click “expand”):

BURLESON: Now, Bill, the rest of the quartet is in the green room. What was it like to work with such a talented trio?

MURRAY: Well, you know, kind of like you feel — you let them do all the heavy lifting and you sort of steam.

BURLESON: That’s right — how did you know, man?

MURRAY: You’re just laying behind them.

BURLESON: Giving away my strategy, man.

MURRAY: That’s alright. I can see things. I know what’s going on.

Burleson’s flub was made possible thanks to advertisers such as Chevy and Swiffer. Follow the links to see their contact information at the MRC’s Conservatives Fight Back page.

To see the relevant CBS transcript from January 19, click “expand.”

GAYLE KING: Now, we’re going to take you to Tonga which is devastated after a massive undersea volcanic eruption. The damage from that blast and tsunami over the weekend is starting to become a little clearer now. The eruption caused a huge explosion more than 500 times as powerful as the atomic bomb that the U.S. dropped on Hiroshima. The satellite image shows the neighborhood in Tonga as it looked last month and here’s what the area looks like now.

KING: Look at this.

KING: Covered in a thick coat of volcanic ash. This is a major port before the eruption, and now it is almost unrecognizable.

KING: Telephone communication to Tonga is slowly starting to return since the eruption, but it could take weeks to restore the internet service. Three of its smaller islands suffered serious damage from tsunami waves that reached almost 50-feet high, guys, that is high.

BURLESON: You know, we often times —

BURLESON: These stories are a harsh reality of what we’re going through and we have to do our part because these are more frequent.

DOKOUPIL: Yes. Yeah and if you’re on the west coast, the clock is ticking on the big one.

KING: We saw some stuff over the weekend that was very troubling.

BURLESON: And we do know they need help to recover.

BURLESON: That’s for sure.

KING: We will continue to tell the story.