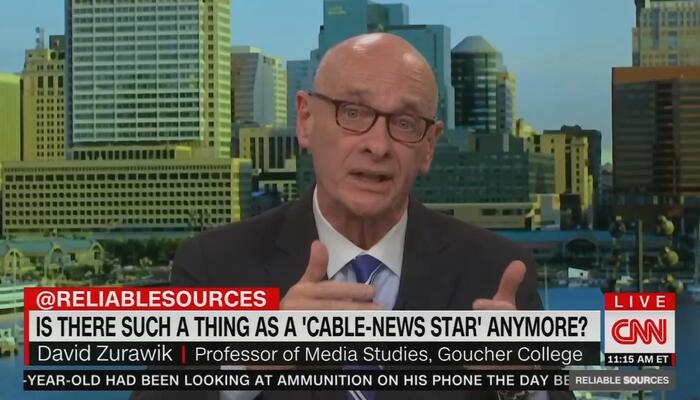 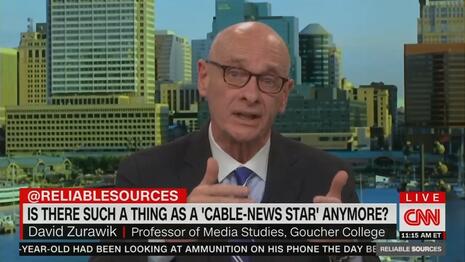 Former Baltimore Sun media reporter David Zurawik is a regular guest on Brian Stelter’s Reliable Sources show, in part because his shameless hatred of Fox News and Trump, but also because of his slavish adoration of liberal-media stars.

On Sunday’s show,  Zurawik displayed his tilt by insisting Chris Cuomo did a “terrific job” for CNN, and confessed “I have separation anxiety” about Brian Williams leaving his MSNBC show. But Fox’s Lara Logan is like a drug addict.

Let’s guess Stelter was very pleased, and will keep him in the regular rotation. First came the smooches for ethically compromised Democrats:

STELTER: Zurawik, how do you view this landscape suddenly changing with Cuomo’s departure?

ZURAWIK: It’s a huge thing and that’s a big part of this story, Brian, I think is that Chris Cuomo as a performer, as a talent in the 9:00 p.m. time slot, did a terrific job. I mean, he did a terrific job. He had almost a million viewers a night. He was competitive in the toughest primetime time slot there is. That complicated, I’m sure, for CNN when they were dealing with him because he was so successful as a performer in that time slot.

Bring in the “laugh track” for the idea that Cuomo was “competitive” in the ratings. It’s like praising the Detroit Lions as “competitive.” Zurawik hates Fox so much that he’s going to ignore headlines like “Fox News Nabs 94 of Top 100 Most-Viewed Live Cable Telecasts,” or that Sean Hannity gets about three million viewers to Cuomo’s “almost a million.”

People like Zurawik and Stelter proclaim they revere professionalism in the media, and yet they still have the tenderest feelings for Brian Williams, who shouldn’t have even been rewarded with an MSNBC show after being exposed as a serial liar about his personal exploits in hurricanes and war zones.

Later in the show, Stelter asked Zurawik about Lara Logan being on a “time out” of sorts from Fox News after comparing Dr. Fauci to Dr. Mengele. That outburst was bad, but since when does CNN get to promenade about Nazi comparisons when it has thrown that mud routinely?? On his show, Stelter let a guest say Donald Trump would kill more people than Hitler, Stalin, and Mao combined!

ZURAWIK: This is someone who was a big, big star and an outstanding journalist, and the greatest, most important TV journalism production in the history of the medium, 60 Minutes. She’s no longer relevant, she’s moved to the margins and she’s adopted this playbook that Donald Trump used, and now Lauren Boebert, and people on the far right use of being super transgressive to get attention to themselves.

She’s part of that now. And it’s — and it’s not sad. It’s disgraceful. But more disgraceful or just as disgraceful is Fox not commenting on it, not denouncing these words and it is disrespect to everyone who would — who perished in the hell of the Holocaust and their survivors today, this is deplorable. But this is the state, our political and to some extent journalistic because Fox calls itself a journalistic institution, has declined.

They always want people to forget that 60 Minutes was not only the home of Dan Rather’s Fake Bush News, but a sickening syrupy forum for Democratic politicians, especially Barack Obama’s love-ins with Steve Kroft.

Zurawik’s wacky takes were supported in part by Chase and Fidelity.