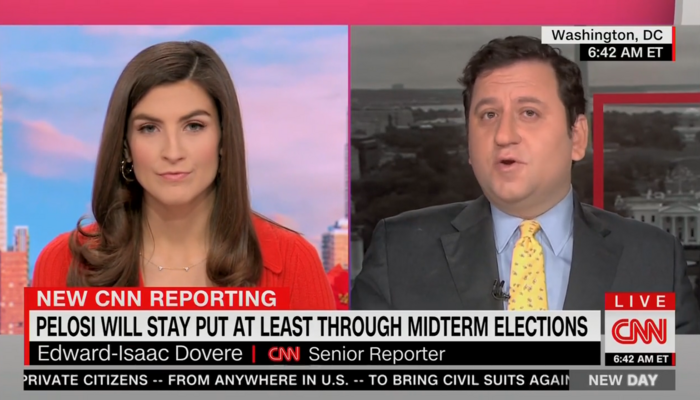 You know the Democrats are in deep trouble when even CNN admits it.

On Monday’s New Day, CNN’s Isaac Dovere reported that, contrary to her 2018 pledge to serve no more than four more years as Speaker, Nancy Pelosi is considering running yet again for Speaker in 2022. Of course, the odds that the Dems will be in the majority after the 2022 elections and therefore in a position to elect the Speaker are, to put it kindly, not great.

That led Dovere to describe the “existential crisis” that the Dems are facing. He added that whereas some in the caucus may want a new generation of leadership, Democrats are “actually terrified of what the future will be like without her.” He suggested that as bad as things might be under Pelosi, they could be even worse were she to leave leadership.

“Existential” is a word that talking heads often bandy about. Its literal definition, of course, implies that nothing less than the continued existence of the Democrat party could be at risk.

The segment ended with a discussion of who might succeed Pelosi, with Hakeem Jeffries depicted as the frontrunner.

But here’s a helpful suggestion for the Democrats. Since the Speaker, and presumably, also the minority leader, do not actually have to be a member of the House, elect Saule Omarova as your next leader. She is Biden’s recently-withdrawn nominee for Controller of the Currency. And Omarova boasts bona fide Soviet roots. As long as you’re facing an existential crisis, why not rebrand yourselves as, say, the New Marxists? Just a thought.

Note: Dovere’s comments were generally straightforward. But — presumably to retain his liberal CNN street cred — he worked in a shot about Democrats being concerned about “the political threats and the larger questions of what’s going to go on with our democracy.” Translation: if those evil Republicans win the majority, the end of democracy will be nigh!

CNN reporting that “terrified” Democrats are facing an “existential crisis” was sponsored in part by Zales, Schwab, Tide, Volvo, Google, and Whole Foods.

KAITLIN COLLINS: Nancy Pelosi has had her grip on the Democratic caucus for nearly 20 years. But new CNN reporting shows that she may not be ready to hand over her Speaker’s gavel just yet. Sources say that Speaker Pelosi plans to file and run for re-election, and isn’t ruling out the possibility of trying to stay in leadership after 2022 despite an earlier vow that she made.
. . .

And some Democrats have said they wanted different leadership, to represent this generational shift that we have seen in the Democratic party. And I know you talked to over two dozen House Democrats for this story. So what did they say about this?

ISAAC DOVERE: This is, this existential crisis that they’re going through. They’re ready for new leadership. They feel like what happened over the last couple months showed a lot of things that need to change in the way that the House was running, and the way that they want their leadership to be responding to them.

But on the other hand, they’re looking at Pelosi and saying she has such a level of relationships, and control, and experience that they’re really actually terrified of what the future will be like without her, what it will be like to try to stay unified and cohesive as they feel like they need to, especially with the political threats and the larger questions of what’s going to go on with our democracy and political process here.

COLLINS: Yeah. And I think, you know, you could say that maybe her grip is not as strong as it has always been. We saw that play out with the infrastructure bill and how those votes went down. But is the democratic caucus prepared for what a post-Pelosi era would look like?

COVEREL: Not really, at least so far.

That level of lack of authority, lack of allegiance to authority, lack of deference to her as Speaker, that was a problem for Nancy Pelosi as a long time leader. And looking forward to what a new leader would face, it would be all of that and probably more.

COLLINS: Is it even obvious who the new leader would be?

DOVERE: Much of the speculation is centered around Hakeem Jeffries, the congressman from New York. He is someone who has been building himself up in leadership. There’s also some talk around Katherine Clark, who is the assistant Speaker, from Massachusetts. And then Pramila Jayapal, the head of the congressional Progressive Caucus, I reported in the story, has been making calls, making people think that she’s interested in pursuing leadership herself.