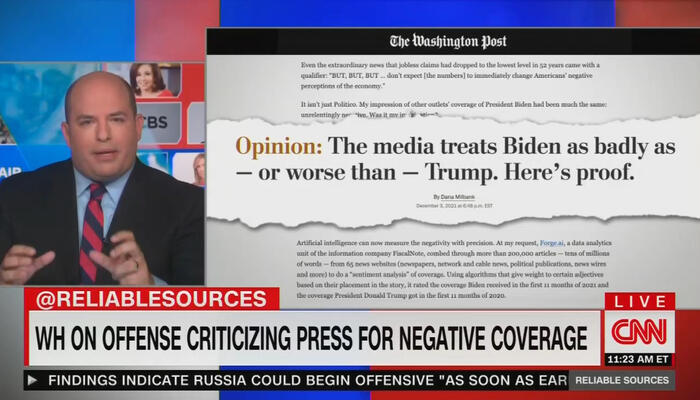 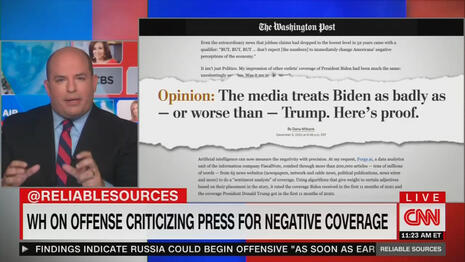 Reliable Sources, CNN host Brian Stelter entertained the laughable notion that the media have been harder on President Biden than they were on his predecessor, President Trump.

Stelter got this ridiculous idea from a Washington Post piece by Dana Milbank, who claimed to have analyzed the “tone” of hundreds of thousands of news articles with artificial intelligence. And supposedly, this analysis found that yes, the media were in fact being tougher on Biden:

Let’s leave aside the notion that harsh coverage of Biden amounts to “the murder of democracy,” and instead talk about Milbank’s conclusion that Biden has been treated at least as harshly as Trump was. To a reasonable person, findings this transparently at odds with reality would suggest there was a problem with either the methodology or the AI the researchers used. As they say in statistics, “garbage in, garbage out.”

Stelter, however, is not paid to be reasonable. “What do you think about that?” he asked his audience thoughtfully. “Is that possible? Does it ring true to you?”

To discuss, he brought in his guest for the segment, Shareblue writer Eric Boehlert. A thorough gaslighting of CNN’s audience ensued.

“Do you think the Biden team is right tone out there griping, airing grievances about the press right now?” Stelter inquired.

Boehlert replied: “Oh, sure, and I think it’s long overdue.” He then argued that the press ought to engage in “a little self-reflection,” and declared Milbank’s findings “very convincing.”

Trump was a fascist, he was a pathological liar, he’s trying to destroy free and fair elections in this country. And the idea that this center-left, conventional Democrat is getting worse coverage? If I were in the press, I would stop and think, “What are we doing here, and is this all accurate?”

As it happens, the Media Research Center has done its own research comparing coverage of Presidents Biden and Trump. Back in April, analysts took an exhaustive look at all evening news coverage from the top three broadcast networks (ABC, CBS, and NBC) and found that during the first three months of each President’s term, the coverage of Biden was 59% positive, while for Trump it was 89% negative.

While Milbank references this three-month “honeymoon” for Biden in his analysis, he does not seem aware that relative to the rest of Trump’s presidency, those first three months were also something of a honeymoon for him. Between 2017 and 2021, the coverage of Trump averaged between 90% and 92% negative. Is Milbank suggesting that the current numbers are just as bad for Biden?

How many instances did this analysis find of journalists comparing Biden to Hitler? During a single three-day period on cable news back in 2018, NewsBusters found 22 comparisons of Trump’s border policy to the Holocaust and slavery. Is Biden racking up similar numbers?

How about coverage of the border crisis under each president? See for yourself.

We could go one like this, but there’s no point. Granted, the above research focused on television coverage, but it’s not as though the print media were drastically softer on Trump. Milbank’s findings are as much a reflection of reality as a scientific paper concluding that goldfish are more intelligent than dolphins — and that’s obvious to almost everyone. Except to Stelter and Boehlert, that is.