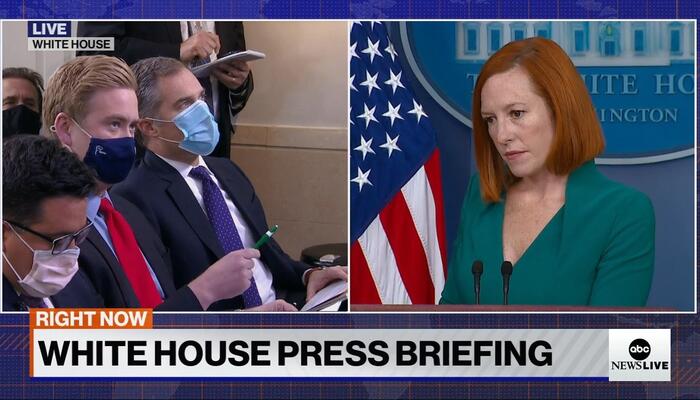 Hours before Press Secretary Jen Psaki’s lame attempt at humor, Tuesday’s White House press briefing similarly featured moments of stupidity as liberal journalists hit Psaki from the left on gun control, January 6, cutting back holiday parties due to Covid, and, worst of all, the dark red voting tendencies of Kentuckians who lost their homes in violent tornadoes. However, it wasn’t all lost as Fox’s Peter Doocy brought the heat on Afghanistan and crime.

Doocy didn’t waste time in cutting to the chase after being called on: “Why is it that there are still Americans stranded in Afghanistan?”

Psaki insisted the U.S. has kept its promise to “help” any American “get out” seeing as how, since the country’s collapse, “we’ve directly assisted 479 American citizens” and “450 lawful permanent residents and SIV holders and SIV applicants” in “depart[ing] Afghanistan.”

Doocy pushed back, repeatedly noting that “479 left behind is a lot higher than the 100 to 200 that President Biden was talking about at the end of August.”

He continued pressing, noting “there are now, at least about a dozen who want to leave right now” before asking whether stranded Americans was a topic President Biden “works on every day.”

Of course, Psaki admitted he doesn’t other than “regular updates from his team,” but instead of stopping, she suggested some Americans don’t want to leave and mocked the question by joking that “the United States does not track or put a tracker on American citizens traveling overseas” even though “[t]hat would be quite a Fox News story.”

With his remaining time, Doocy went back to what she’s said about rising crime having come during “the pandemic” via “a range of reasons.” “Would you consider one of the reasons in the range prosecutors who are cutting people who are accused of many criminal offenses loose too quickly,” he asked.

Psaki demurred, arguing she wasn’t going to analyze the reasoning other than tie it to the pandemic.

Doocy’s final line of questioning stemmed from “reports that these smash and grab robberies are being organized on social media platforms” and whether “the administration is doing anything about that.”

When Psaki also ducked it other than to say they’re “monitoring…these thefts very closely” because they’re “very troubling,” Doocy called out the hypocrisy in that the White House hasn’t “been afraid to call out social media companies, like, when you thought that they were a platform for Covid disinformation” under the guise of “public health.”

Asked why they won’t “consider [crime] a public health matter,” Psaki passed the buck and suggested he talk to the FBI, Justice Department, and local officials.

Elsewhere in the helpful category, Fox Business Network’s Edward Lawrence drew a word salad when he questioned whether major tenants of the Build Back Better package — like childcare — would actually lower inflation.

Moments later, Real Clear Politics’s Philip Wegmann and VOA’s Patsy Widakuswara brought up foreign policy with the former wondering whether the U.S. “still [has] a commitment” to Afghan women and the latter stumping Psaki with a basic question about what was the administration’s top foreign policy accomplishment of 2021.

As for a surprise, ABC’s Elizabeth Schulze had this exchange over the national debt (click “expand”):

SCHULZE: And just quick follow up on the debt limit. What do you say to Americans who see this as yet another example of Congress kicking the can down the road?

SCHULZE: Raising it until 2023, but it’s going to come up again right after the midterms. What do you say to people say we’re just going to be having the same conversation a little bit over a year from now?

PSAKI: I’m not sure what American person is saying that or is concerned about the debt limit. But maybe there’s somebody who’ve met on the street. I don’t know, but I will say that, um, you know, our view, the President’s view is that this has been done in a bipartisan way. The American people shouldn’t be worried about whether or not elected officials are doing what they should do in raising the debt limit to make sure we’re covering bills that have already been incurred, which I think is sometimes a misunderstanding out there. We’re not talking about future spending or the size of the Build Back Better package. I’m not saying you’re suggesting that at all and that, you know, I think the President would— would convey that this is something that should just be done in due course, as it’s been done, more than 80 times to quote Josh in the past, and that it shouldn’t be something that consumes weeks, months of time. It should be done because we want to avoid default. We want to ensure people are getting their Social Security benefits, that retirees are being paid, military, and that there’s no risk to the U.S. economy.

At the other end of the spectrum of insightfulness, Bloomberg’s Nancy Cook inquired about any plans for the White House “to commemorate January 6” (because everything has to be about January 6 for the media).

And, worse yet, The Washington Post’s Sean Sullivan inquired about how Biden was “prepar[ing]” to visit Kentucky tornado victims seeing as how they “voted overwhelmingly for former President Trump” and still “comfort” them amid a time of “polarization and political division” (click “expand”):

COOK: What is the White House planning to do, if anything, to commemorate January 6th? I feel like there’s been a little push and pull internally at the White House, you know, not necessarily wanting to elevate former President Trump but also wanting to respond to some of the — the threats. So, how are you all approaching that?

SULLIVAN: When the President travels tomorrow, he’s going to be going to a region that voted overwhelmingly for former President Trump. He said yesterday he wants to be a source of comfort when he’s there. Can you talk a little bit about how he prepares to go to what seems like it’s going to be the most, you know, conservative area of the country that he’s traveled to as President and doesn’t make it harder to be that source of comfort, given how much polarization and political division we’re seeing at this moment right now?

Having covered the good and the ugly, we present to you the bad as NBC’s Peter Alexander focused on gun control and floating cutbacks to Christmas parties due to the coronavirus. On the former, he was joined by The Wall Street Journal’s Sabrina Siddiqui and, on the latter, Sullivan joined in (click “expand”):

ALEXANDER: Jen, you know, this is a very hard day anniversary nine years since the awful shootings that took place at Sandy Hook. The President’s obviously faced fierce criticism and resistance from Republicans on new gun restrictions in his efforts. He likes to say that he tells us straight to the American people, even when it’s not convenient. Does the President concede that another year is likely to pass without meaningful legislative action on guns?

ALEXANDER: So he can’t predict, but, clearly, the political capital, as you witness, is not there. He was in charge of this when he was the vice president however many years ago as well and witnessed the roadblocks he ran — ran into many times for Republicans. So what needs to change?

ALEXANDER: He heads to an in-person fundraiser tonight. I can’t think of the last one that he’s done. This is may be the first one in the course of his time in office. You can tell me if there’s another that I’m missing here. As we’re speaking about in person events, just because a lot of people look to the White House for sort of guidance on these things as an example, what is the White House’s position on holiday parties taking place here? How are you guys handling that? Have you changed your position? Are they not happening ? What are you doing differently?

SIDDIQUI: I wanted to follow up on guns. In California, Governor Newsom is pursuing a proposal that would allow private citizens to sue anyone who manufactures, sells, and distributes assault weapons in the state. It’s based on the legal framework that was used in the Texas law to ban abortion after six weeks. Does the White House support Governor Newsom’s approach here?

SIDDIQUI: As you note, the President marked the Sandy Hook anniversary. He’s called on the Senate to pass stricter gun laws. But what are you — what is he doing himself to crawl votes? And given the gridlock, would he support a filibuster carve out to get something done on gun legislation?

SULLIVAN: I know you said it’s going to look a little different than it has. Does that mean the President is foregoing the sort of, traditional parties the President hosts for members of Congress and others? And if so, is that due to a specific reason? Is that the new variant? Is it the state of the pandemic and infections in general? What is that — sort of different kind of holiday schedule?

To see the relevant transcript from December 14’s briefing (as well as additional questions), click here.