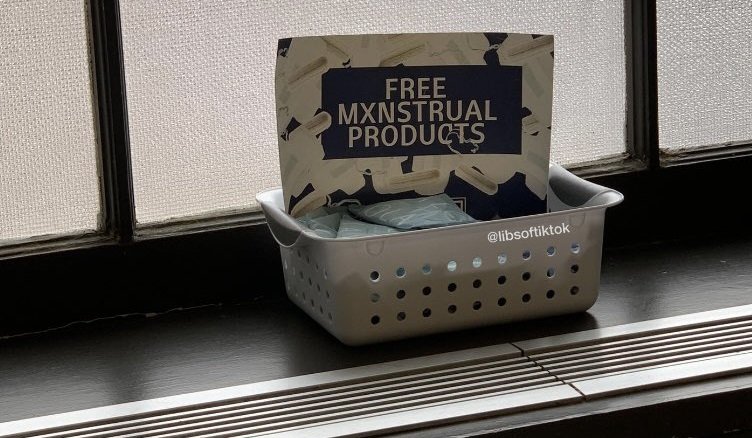 Cornell University is now offering baskets of free menstrual products in all public women’s, men’s and “all-gender” bathrooms on campus.

Signs on the baskets use the made-up term “mxnstrual,” though organizers of the “Free Period Products” project now say that they will be changing their signs because they decided that “menstrual” is “not a gendered term.”

These baskets are in all the mxn’s bathrooms at Cornell University pic.twitter.com/FuP7qm56Qx

The “Free Period Project” team is comprised of members of the Gender Justice Advocacy Coalition and Student Assembly Infrastructure Fund Commission, according to a report from the Cornell Daily Sun.

“The impetus behind the initiative is simple,” GJAC president Clara Drimmer ’22 wrote in an email to The Sun. “Toilet paper is free in any public bathroom. Why shouldn’t period products be free for all people who need them?”

Originally, the products were only offered in women’s and gender neutral restrooms.

“As of 2017, they had put menstrual products in women’s and gender-neutral bathrooms on campus,” Mullen said. “In 2020, they decided to put them in all bathrooms on campus, and the rationale behind that was that regardless of how people identify biologically or gender-wise, everybody should get access to these products.”

The Sun report explains that “in the 2020-2021 school year, FPP provided at least 126,000 tampons, 70,000 pads and 33,600 liners across Cornell’s campus. Despite this success, according to Drimmer, they’ve had a harder time securing long-term funding for continued free menstrual products.”

“FPP has yet to find a way to fund the program long term through University budgetary avenues, including the new $5 billion campaign ‘to do the greatest good,’” Drimmer said. “If we cannot find a permanent funding source, these products will likely disappear by the end of the spring semester.”