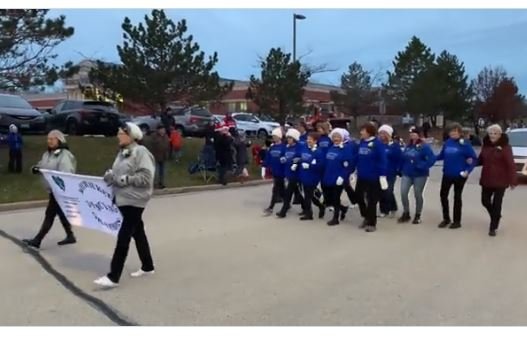 The Milwaukee Dancing Grannies performed for the first time on Saturday at the Franklin, Wisconsin Christmas parade. This was their appearance since they lost four members at the Waukesha Christmas Parade when a violent racist mowed down 80 people in the parade killing six including four members of their group.

Only 2 weeks after they lost 4 people in the Waukesha Christmas parade, the Milwaukee Dancing Grannies are back.

They walked in the Franklin parade this afternoon with a banner honoring their friends.

Their story of resilience tonight after football @fox6now pic.twitter.com/RVWctzL2pq Four members of the dancing grannies were killed by a madman who mowed them down at the Waukesha Christmas Parade. Virginia Sorenson, 79, LeAnna Owen, 71, Tamara Durand, 52, and Wilhelm Hospel, 81, who were all part of the Dancing Grannies group.

The Milwaukee Dancing Grannies made their first appearance in a Christmas parade Saturday since a suspect drove through a parade in Waukesha, Wisconsin, last month, killing four of the group’s members and two other people.

“We are going to get through this,” Dancing Granny Laura Thein told FOX 6 Milwaukee at the Franklin, Wisconsin, parade Saturday. “We are very strong women, and with the strength of each other we will get through it.”

Thein said the SUV barely missed her on that day.

“When I looked, all I saw was bodies in the street,” she told FOX 6. “It took me a couple minutes to kind of get my head together because I couldn’t believe what I was seeing.”