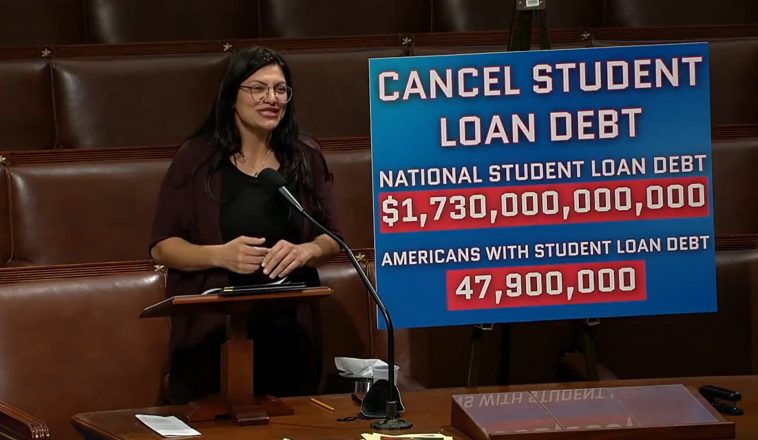 Despite earning many times more than the average American, Dem Rep. Rashida Tlaib wants taxpayers to pay off her student loan debt.

Rep. @RashidaTlaib: “I worked full time, Monday through Friday, and took weekend classes to get my law degree. And still, close to $200,000 in debt. And I still owe over $70,000 and most of it was interest.” pic.twitter.com/STGxo70JlS

“I worked full time, Monday through Friday, and took weekend classes to get my law degree. And still, close to $200,000 in debt. And I still owe over $70,000 and most of it was interest,” Tlaib said during oral arguments on the House floor.

“And guess what? I didn’t go to the for-profit entities, I went to legal aid, I worked at the nonprofit organization fighting for the right to breathe clean air, to fight for the worker that was getting their wage taken and stolen from their employer. I went and worked on immigrant rights and so much more,” she continued.

Critics have pointed out this actually undermines her argument for student loan debt forgiveness.

Critics are slamming comments made by Rep. Rashida Tlaib, D-Mich., arguing her complaints about her student loan debt proves federal bailouts would benefit the rich.

Many opponents of federal student loan forgiveness argue it’s unfair. Nearly half of student debt is owed by people in households that have graduate degrees and can more easily pay back debt than others, according to the Urban Institute.

Half of all student debt is held by people with graduate degrees. The idea that this is some kind of persecuted class of people who deserve tax funded debt forgiveness is absurd.