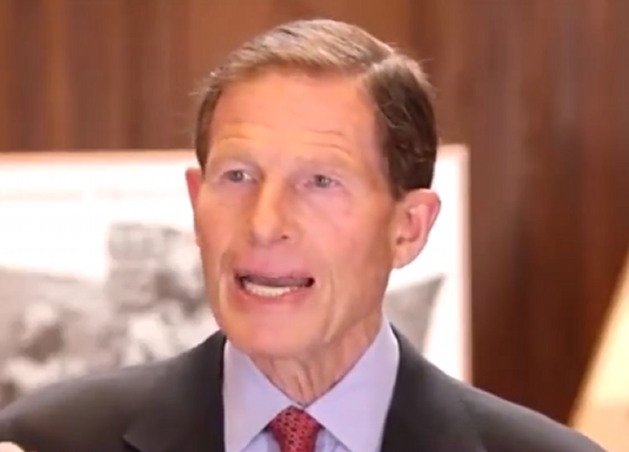 In recent years, Democrats have struggled with the label of socialism. Many of them don’t want to be branded as socialists, but at the same time, they can’t afford to alienate their far left base.

Senator Richard Blumenthal of Connecticut has just raised the stakes, however. He not only attended an awards ceremony hosted by the Communist party, he spoke at it.

Sen. Richard Blumenthal (D., Conn.) spoke at an awards ceremony over the weekend hosted by a Communist Party affiliate whose leaders used the event to recruit potential members to the organization.

Blumenthal, one of the wealthiest members of the Senate, presented certificates of special recognition from the Senate to three winners of the “Amistad Award,” given annually by the Connecticut People’s World Committee, an affiliate of the Communist Party USA and the Marxist People’s World news site.

Blumenthal appeared even as Democratic leaders have downplayed allegations that many in the party support socialist or communist policies. President Joe Biden distanced himself from the left-wing ideologies during the 2020 presidential campaign, at one point bragging that he defeated a socialist, Sen. Bernie Sanders (I., Vt.), in the primaries. Blumenthal used his speech at the ceremony to tout Democratic legislative policies, including voting rights reform, ending the filibuster and the Build Back Better Act, according to the Yankee Institute, a free market think tank in Connecticut that reported details of the event.

Blumenthal was introduced at the event by Lisa Bergmann, a Communist Party member who blamed corporations for the “imperialism that exists in our world that is undermining the labor and environment.”

You can watch Blumenthal’s remarks below:

Some highlights of Democratic Senator Richard Blumenthal and his introducer at the Connecticut People’s World Committee, an affiliate of Communist Party USA. pic.twitter.com/w5CvV7tGzy

It certainly sounds like he considers the Communist party an ally of the Democrat party.