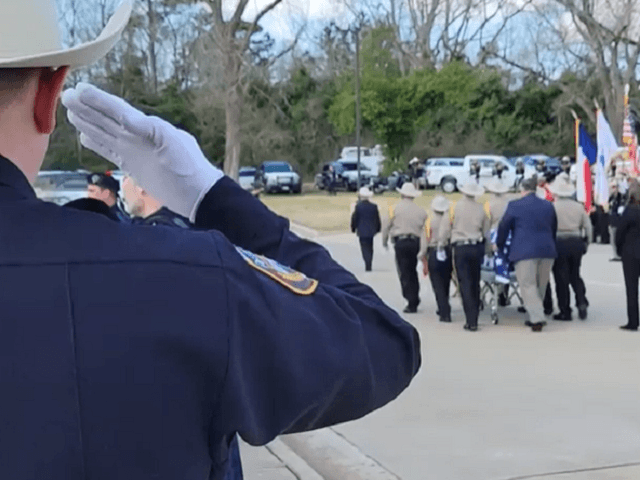 In a gathering that may have exceeded the population of the city of Coldspring, a massive contingent of law enforcement officers from across Texas and as far away as Chicago and New York City joined with the community to honor the life of the deputy referred to as a “sheepdog” by his widow, San Jacinto County Treasurer Dee Dee Adams. The assembly celebrated his life and provided comfort and support to his grieving family. 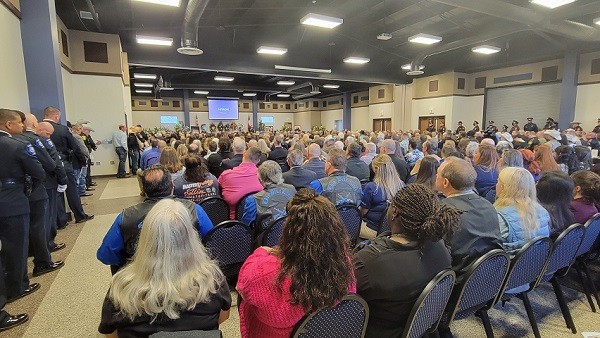 The Coldspring community center was standing room only as the East Texas community turned out to honor the slain deputy. (Bob Price/Breitbart Texas)

Deputy Adams died at the age of 62 in Houston after being shot with his own weapon following an altercation with 35-year-old Czyz Harrison. The altercation arose after employees at Casanova Collezioni called for assistance after Harrison became angry over a declined credit card transaction. Houston police officers later shot and killed Harrison when he came at them with a knife at another location in the mall. 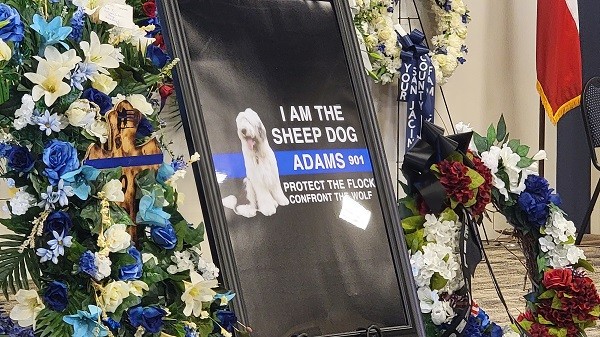 “I am the Sheep Dog” tribute to Deputy Neil Adams. (Bob Price/Breitbart Texas)

The theme of the service revolved around what Dee Dee called his service as a sheepdog. During a press conference on the night her husband was murdered, Dee Dee said, “My husband always said you can be a sheep or a sheepdog. I want everybody to pray for all the sheepdogs out there that are protecting everybody.”

“My husband always said that you can either be a sheep or sheepdog, and I want everybody to pray for all the sheepdogs out there that are protecting everybody…”

“They get a bad rap and they just want to protect,” she said. “That’s what they want to do in their heart. Everybody’s turned their back on them. Everybody should pray for all of them because they’re here for you.” 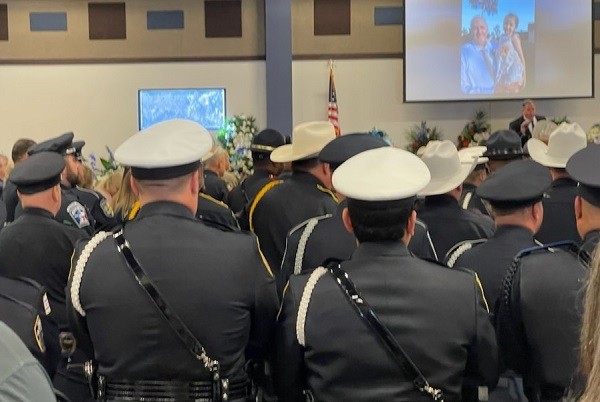 A wall of blue stands in honor of Deputy Neil Adams. (Crystal Laramore)

On Friday, everyone in Coldspring, and more were praying for Deputy Adams, Dee Dee, and the law enforcement community. 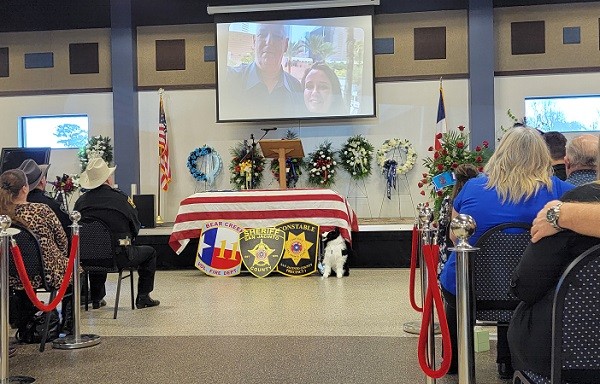 Texas Lt. Governor Dan Patrick visited with the family of the slain deputy and the community at the viewing on Wednesday evening. He told the community there have been 50 law enforcement officers killed in the line of duty across Texas since he began serving as the state’s number two executive, according to a statement read at the memorial service on Friday. He wanted the people to know that Texas grieves with his family today. 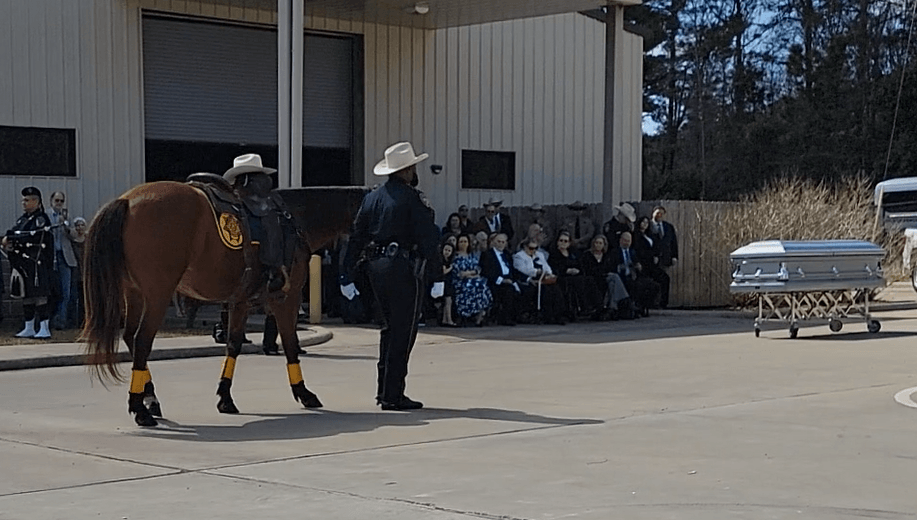 “My heart breaks for the family,” Patrick said. “Not just the blood family but for the blue family. The struggles and concerns that must go through your mind at night when you lay your head down on your pillow.” 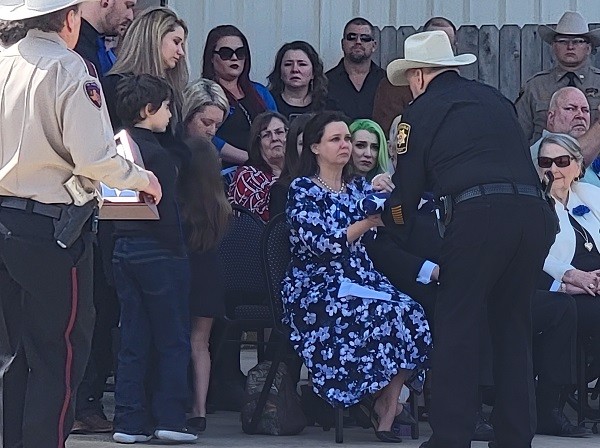 “Neil and his wife Dee Dee are loved by this community,” he explained. “Both have dedicated their lives to service. This was a shock to us all. Neil was a hero and was loved by all.”

U.S. Representative Kevin Brady (R-TX) flew in from Washington D.C. on Friday morning to be with the family and friends of Deputy Adams in one of the communities he represents. Following the service, the retiring congressman spoke with Breitbart Texas about the service. 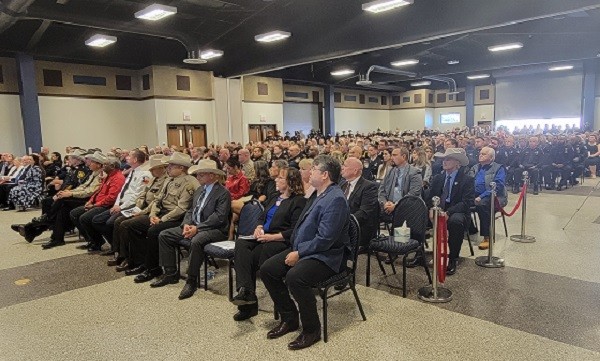 “It was a wonderful tribute to Neil and Dee Dee and the law enforcement [community] as well because this is really a time when our country, some in our country, is challenging the importance of the blue,” Brady said. “This is San Jacinto County, this is Texas.”

“What a joy and a difference he’s made in so many lives, and today, you can see it,” he continued.

“Things like this shouldn’t happen,” Luttrell told Breitbart. “This just goes to show the sacrifices our law enforcement officers are making every single day. They are literally deploying out their front door every single day.”

Luttrell said senseless tragedies like this bring entire communities to their knees. “It does my heart good to see that our community has turned out,” the congressional candidate concluded. “This man was doing his job protecting us.”

The memorial service for Deputy Adams included full ceremonial honors. Those included a bagpipe and drum corps escort of his flag-draped casket, three volleys from a rifle team, the passing of a riderless horse, a police helicopter flyby in a missing man formation, and the presentation of the folded flag to Adams’ family. Following the service, a massive procession of police, first responders, and members of the community followed the deputy to his final resting place. The procession stretched for miles and lasted for more than ten minutes from our vantage point.

Harris County Sheriff Ed Gonzales, President Joe Biden’s nominee for director of U.S. Immigration and Customs Enforcement, led a large contingent of deputies to Coldspring to honor Deputy Adams and his family. He also provided many of the resources for the memorial service detail including a helicopter missing-man formation, a riderless horse, the rifle team, and a bugler duet for Taps.

The sheriff from Texas’ largest county reflected on the current anti-police sentiment that prevails in many other parts of the country. “We’re blessed to be in Texas,” Gonzales told Breitbart. “All communities here support law enforcement. We see that reflected here today.”

“We heard today that our law enforcement officers are heroes and they truly are,” the sheriff said. “Deputy Constable Adams put his life on the line protecting others, He’s deserving of this level of respect and his family deserves the respect as well. That’s why we all came to pay our respects.”

San Jacinto County Sheriff Greg Capers and his deputies came to honor Deputy Adams. “It was a fantastic sendoff to a hero who was dedicated to serving our community.”

“There is not a policeman, deputy, trooper, or any federal agent who, when tasked with thinking about the loved ones we have lost, does not shed a tear for our brother or sister officer.”

“We oftentimes think that choosing to live in a small, wholesome county, will isolate us from bad things,” Wright stated. “But the shame is that evil can still reach out and strike one of our own. We mourn the loss of our friend.”

“He and Dee Dee were a fine couple and he took care of his family,” the constable continued. “His death brought the ‘war on the blue’ home to us here in East Texas. It is really tragic.”

In a written statement, Texas Governor Greg Abbott said, “Our hearts are with the family of Deputy Constable Neil Adams. … We are grateful for the dedication of our law enforcement officers who are committed to keeping us safe, whether on or off duty, and their immeasurable sacrifices are not lost on us.” 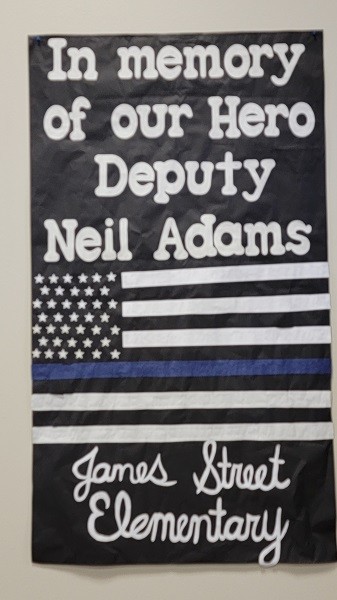 “Cecilia and I ask our fellow Texans to join us in praying for Deputy Adams’ family and the Precinct 1 Constable’s office during this difficult time,” the governor concluded.

Breitbart also spoke with other members of law enforcement who worked with Deputy Adams as well as members of the community. All expressed their deepest regards for this public servant who gave his life in service. 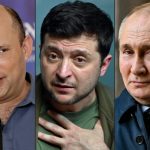 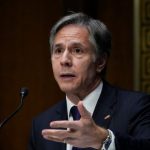