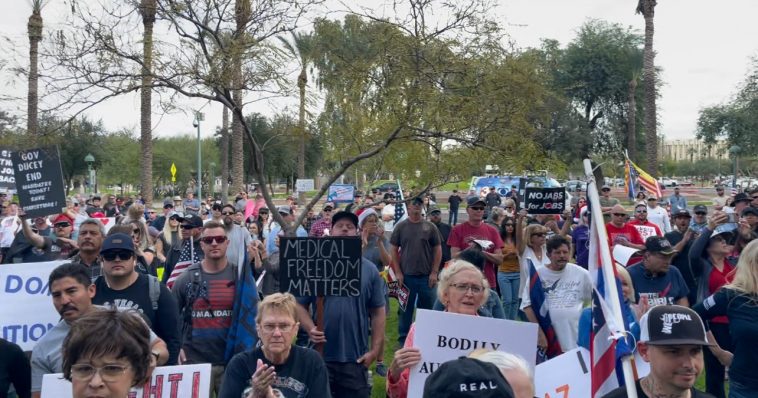 Protesters Rally At The AZ Capitol

Arizona lawmakers held a press conference with concerned citizens to call for an end to the unconstitutional vaccine mandate placed on Arizona employees, and a special legislative session.

The Gateway Pundit reported that about 1000 employees self-organized to call Arizona Governor Doug Ducey to stop the mandate before Christmas. Protesters rallied outside of the Arizona Capitol at noon and marched one mile to City Hall to voice their concerns outside of the Phoenix City Council meeting. Organizer, Merissa Hamilton stated that Phoenix announced that the courts have put all federal mandates on hold, due to the civil action that grassroots patriots have committed to. They claim that this was not a city mandate but a federal mandate.

The Gateway Pundit reported that the City of Phoenix alleged that their City was a federal contractor and they used this to defund police by removing unvaccinated officers.

“We are asking the Governor to bring us into a special session immediately. I have been counting the votes; The votes are there. there is now no longer a reason to not have a special session.”, said Arizona State Senator Kelly Townsend to open the presser.

Townsend also called on her Democratic colleagues to vote for a special session with an emergency clause, which would require 2/3 of both houses to vote in favor. Kimball Cody Speaks To Arizona With His Family

Kimball Cody, a former firefighter in Salt River, Arizona brought his family to the stage with him to show Governor Ducey exactly who this vaccine mandate is affecting. Cody was fired from the fire department on October 1st after two separate medical exemptions were refused.

AZ State Rep. Mark Finchem and Trump endorsed Candidate for Secretary of State called this unconstitutional mandate “The Civil Rights Action Of Our Time”, and he called for an immediate special session to stop the civil rights violation.

Trump endorsed AZ State Senator Wendy Rogers likened this medical tyranny to the evil tyrants who attacked our homeland 80 years ago today. Rogers said, “This has been brewing, growing and it is upon us. And we veterans took an oath to support and defend the Constitution against all enemies, foreign and domestic. You have this lifetime oath from this Senator. God Bless America!”

Let’s remember, none of this would be happening if we didn’t let them steal the 2020 presidential election. The Arizona Legislature must decertify the fraudulent 2020 election!

This is the real civil rights issue of our time.

State Senator Warren Petersen laid out the logical scientific facts about the tyrannical mandates, saying “this defies all logic but more than anything it defies our God-given rights.” He joined legislators in demanding a special session and ending this crap.

Former Chief of Staff for Phoenix Councilman Sal DiCiccio, Sam Stone told the crowd, “you stand and you fight, and you do not comply.”, before revealing that he needed to be vaccinated to visit hospitalized family members in New York. “That was my choice, I chose to do that. This is my vaccine card.”

He then ripped the card up after a volunteer verified that it was real, and he declared “Never Again!”.

Stone told TGP that he needed to get the vaccine to see his family but he doesnt even plan to get the booster shot.

Trump Endorsed Arizona Gubernatorial Candidate Kari Lake told everyone, “I want to know, where’s Doug?”, in reference to Governor Ducey. “Where the hell is Doug?”, she said again. Lake has been calling on Ducey to call a special session for months now to end the mandates and decertify the fraudulent 2020 election. She told us, “I’ve actually started calling him Dud Ducey”.

Attorney General Brnovich received all evidence of voter fraud 74 days ago and he still hasn’t done sh*t. Arizona is tired of waiting.

Contact Arizona Governor Doug Ducey and demand a special session to end these civil rights violations and contact AG Mark Brnovich to demand arrests for the criminals that stole the election.