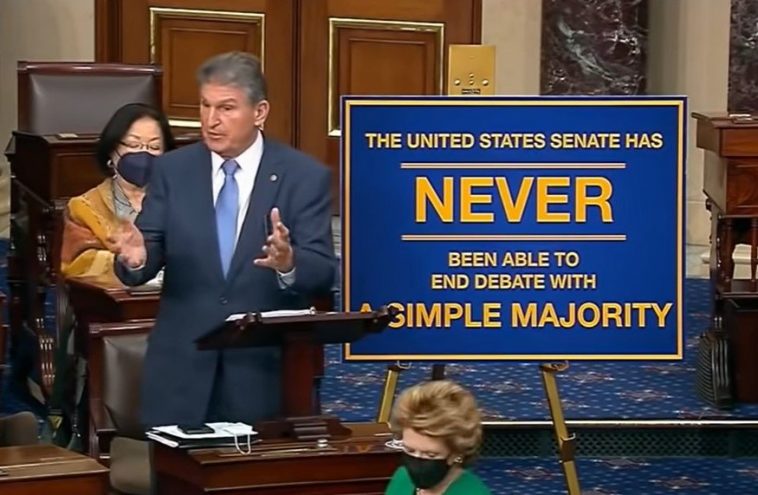 Last night Democrats were unable to change the rules of the US Senate in order to pass their Freedom to Cheat bill. Their proposed legislation would have eliminated voter ID, prevented states from cleaning voter rolls, would have allowed for ballots to be turned in days after the election, and would have allowed for illegal ballot harvesting. It would have destroyed elections in the country and they knew this. That’s why they wanted it and the fake news media promoted it.

The vote failed 52-48 with Democrats Joe Manchin and Kyrsten Sinema joining Republicans in the vote.

Senator Joe Manchin (D-WV) gave an epic speech before the final vote. He helped defeat the communist onslaught for another day.

“I cannot support such a perilous course for this nation when elected leaders are sent to Washington to unite our country, not to divide our country,” he argued.

“Let this change happen in this way, and the Senate will be a body without rules,” Manchin warned.

“We’ve changed the rules,” in the past, Manchin said. “But we changed them with the rules. We didn’t break the rules to change the rules. But all of a sudden now we just can’t do it anymore. Just got to blow it up.”

“The rule book means that the rules changes are done on the basis of broad, bipartisan consensus, not imposed on the minority by raw majority power,” he went on. “No matter who is in power.”

Here is the video.