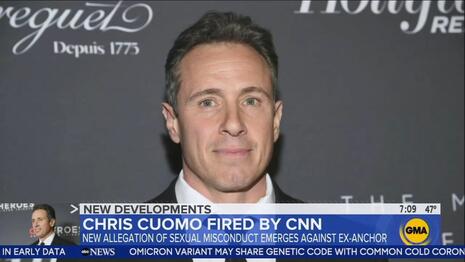 ABC News doesn’t want you to know that the sexual abuse claims against former ABC host Chris Cuomo happened at ABC. The sordid story of the cable anchor, recently fired by CNN over the weekend, continued to unravel.

Initially, it was made clear Cuomo was fired for repeatedly lying about working to undermine accusers of his brother Andrew Cuomo, the disgraced ex-governor of New York. But on Sunday, a woman stepped forward to accuse him of sexual harassment while at ABC. (Cuomo left ABC for CNN in 2013.)

But ABC doesn’t want you do know that. All three networks, starting on Sunday morning, covered the latest angle to the Cuomo firing, but only NBC allowed a mention that it happened while he was at ABC. On Monday, this is how Good Morning America guest co-host TJ Holmes explained it: “We turn now to the new accusation against now fired CNN anchor Chris Cuomo. A former colleague at another network, not at CNN, is accusing him of sexual misconduct.”

Another network? Yeah, TJ, that network is ABC, the one you’re broadcasting from.

Reporter Erielle Reshef repeated the preferred phrase of “another network.”

But now, new allegations of sexual misconduct emerging against Chris Cuomo from a junior staffer at another network. An attorney for the woman, who also represents one of Andrew Cuomo’s accusers, saying, “hearing the hypocrisy of Chris Cuomo’s on-air words and disgusted by his efforts to try to discredit these women, my client retained counsel to report his serious sexual misconduct against her to CNN.” A spokesperson for Chris, saying in a statement, “if the goal in making these false and unvetted accusations was to see Mr. Cuomo punished by CNN, that may explain his unwarranted termination.”

This is nothing new from ABC. Last week, ABC downplayed the initial suspension of Cuomo by CNN for working to dismiss the sexual accusers against his brother. On Tuesday, the network allowed just 28 seconds to the bad news for their ex-host.

On Sunday’s NBC Nightly News, reporter Kathy Park played a clip of CNN’s Reliable Sources in which the journalist noted that the abuse claim happened at ABC:

BRIAN STELTER [on CNN’s Reliable Sources, 12/05/21]: Now, right now I know almost nothing about the allegation. Nothing’s really been reported about it publicly other than the fact this staffer worked with Cuomo at ABC.

Meanwhile on Monday, Cuomo quit his SiriusXM radio show. A Cuomo spokesman seemed to indicate that CNN President Jeff Zucker knew everything, at least about what he did to defend his brother. The statement said this about Zucker:

Mr. Cuomo has the highest level of admiration and respect for Mr. Zucker. They were widely known to be extremely close and in regular contact, including about the details of Mr. Cuomo’s support for his brother. There were no secrets about this, as other individuals besides Mr. Cuomo can attest.

What did CNN know and when did the network know it? Those are the questions to unravel. And when will ABC journalists admit that these accusations against their former GMA host happened at their network?

[Thanks to NewsBusters managing editor Curtis Houck for transcripts.]