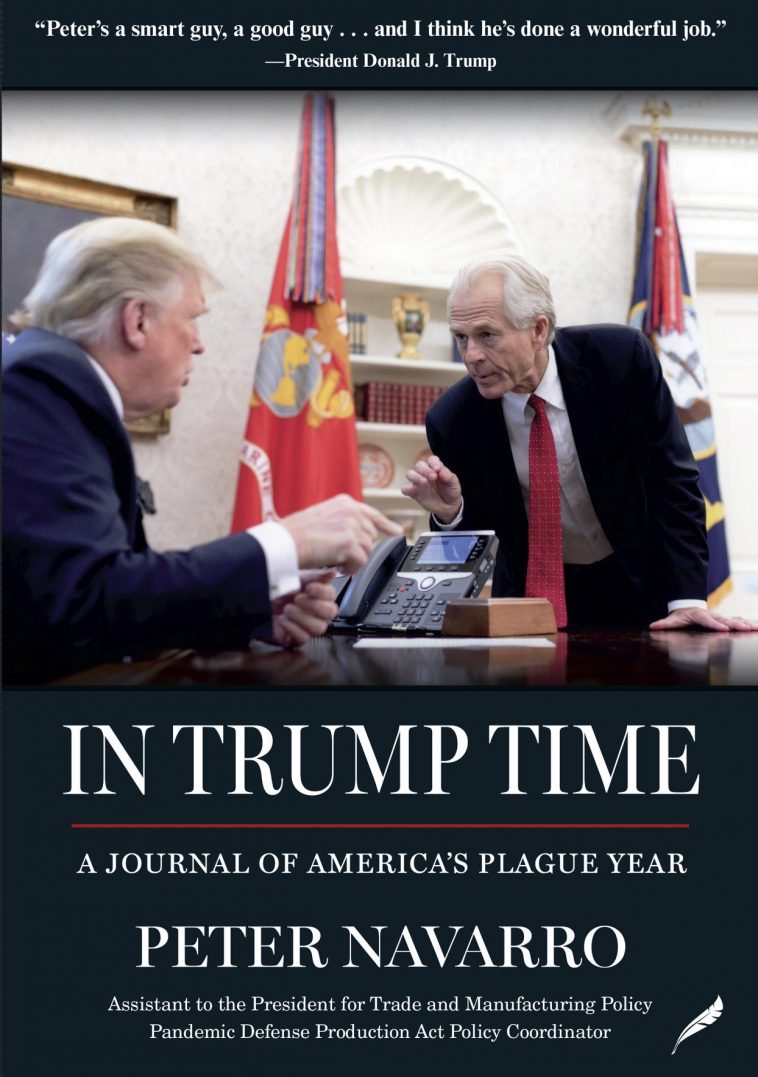 (Note: This is an exclusive excerpt for Gateway Pundit readers from Peter Navarro’s new book IN TRUMP TIME. In this excerpt, Mr. Navarro tells of his clash with Anthony Fauci and the FDA over the use of hydroxychloroquine during the Trump Administration. To preorder the book, use this link. IN TRUMP TIME will be published on November 2nd). A ROGUE FDA WITH BLOOD ON ITS HANDS

Now, you might think that the top doctors and scientists at the US FDA might be smart enough to distinguish between early and late-treatment use of hydroxychloroquine and shape their policies accordingly. Yet you would be wrong.

Indeed, the FDA committed one of the worst blunders of the entire pandemic by taking what amounted to a rogue and foolish action in defiance of both President Trump and the secretary of the Department of Health and Human Services, Alex Azar. Here’s the story behind this important part of the story.

On March 23, four days after President Trump had promised that the FDA would expedite the use of hydroxychloroquine, Azar and his deputy at HHS, Bob Kadlec, gave several FDA bureaucrats very clear and explicit instructions to make hydroxychloroquine widely available to the American public as an early CCP Virus treatment on an outpatient basis. (As shown by the use of hydroxychloroquine in other countries, early-use outpatient treatment would be an important key to interrupting the exponential spread of the virus and minimizing deaths in the United States.)*

Nonetheless, five days later, those very same FDA bureaucrats—including FDA commissioner Stephen Hahn and his eventual replacement, Janet Woodcock—completely countermanded the POTUS-Azar-Kadlec order. Instead, on March 28, the FDA issued a rogue directive restricting the use of hydroxychloroquine to the late treatment of hospitalized patients.

With its rogue directive, the FDA effectively ensured that hydroxychloroquine would be diverted from its best possible use as an early treatment for outpatients to its worst possible use as a late-treatment medicine for hospitalized patients. At least in the court of public opinion, that single decision was tantamount if not to murder, then certainly to negligent homicide.

Now I would like to tell you that I uncovered a very good reason in my subsequent investigation as to why Hahn and Woodcock, with the apparent help of Dr. Rick Bright, would make such an egregious decision. Yet in the absence of a smoking gun, all I can do is surmise that the decision was either gross incompetence or an intentional attempt by the Deep Administrative State to sabotage President Trump’s hydroxychloroquine policy. Both are nearly unimaginable.

Either way, there is considerable blood on the hands of the FDA for that decision alone. Yet there would be even more blood on Anthony Fauci’s hands.

FEAR IN HIS EYES, LOATHING IN MINE

On April 4, I had my second major facedown with Saint Fauci in the Situation Room. Recall that in my first go-round with him on January 28, Fauci had strenuously opposed President Trump’s travel ban on China. If we had not prevailed in that fight, hundreds of thousands and perhaps millions of Americans would have needlessly died due to Fauci’s bad advice.

To order your copy of Peter Navarro’s IN TRUMP TIME, click here.

This time, the facedown with Fauci was over hydroxychloroquine. In preparation, I had Doc Hatfill and my team prepare a large dossier with the hundreds of pages of scientific studies I had reviewed on the safety and efficacy of hydroxychloroquine. I knew that Fauci would play the “there’s only anecdotal evidence” card and wanted to be ready to prove that that assertion was false.

The meeting started off civilly enough. Vice President Mike Pence was at the head of the table, chairing the meeting, along with his chief of staff, Marc Short; Jared Kushner had come to make a cameo appearance; and the big guests of honor were Fauci along with Surgeon General Jerome Adams and the FDA’s Hahn.

To my pleasant surprise, at the outset of the meeting, the surgeon general offered strong words in support of hydroxychloroquine along the lines of “The medicine certainly can’t hurt you, and there seems to be some evidence that it may help.”

I greatly appreciated those words because I knew he was taking a risk. His peers—Fauci in particular—might well try to come down hard on him.

Adams was followed by Hahn, and to my surprise, even Hahn had some encouraging words for hydroxychloroquine—perhaps because of all the heat the FDA had been taking for its moronic March 28 directive.

That support from Adams and Hahn notwithstanding, when it was Fauci’s turn, right on cue, he immediately played his “there’s only anecdotal evidence” card. Just as immediately, I stood up from my backbench chair just behind Vice President Pence and walked straight toward Fauci.

As I approached him, I saw fear in his eyes. I’m sure it crossed his mind that I might physically assault him. Instead, I dumped my large dossier of studies onto the table in front of him and said to Fauci as much as to everyone else in the room—especially VPOTUS—“Tony, these are not anecdotes. That’s more than fifty scientific studies in support of hydroxy. Fifty! So stop spouting your crap about there only being anecdotal evidence because not only is it counterfactual. You are going to kill people just like you did during the AIDS crisis when you refused to approve medicines that everybody but you knew worked.”

Now, keep in mind that discussions conducted in the Situation Room are generally considered confidential. Yet—and there was only a very small handful of very senior officials attending this meeting—my confrontation with Fauci was immediately leaked to Jonathan Swan at the DC gossip website Axios.

Swanny, as I liked to call him whenever he called to confirm a fact or try to coax a leak from me, gave a detailed account of what he described as an “epic Situation Room showdown” featuring a “heated exchange” between Fauci and me.

His reporting was not wrong. But that kind of leak was just not right—and I told him so.

At least my confrontation with Fauci would shut him up for a couple of days. Then a tragic hat trick of Hydroxy Hysteria would hit Doc Hatfill, POTUS, and me harder than an Alex Ovechkin body check.

THE FRENCH MISCONNECTION
This tragedy of scientific errors began on April 14, 2020, with a French study posted on the online bulletin board medRxiv…

To get your copy of Peter Navarro’s IN TRUMP TIME, click here.

* A key benefit of hydroxychloroquine that is seldom discussed is this: as their viral load and severity of infection are reduced, patients have to spend less time in the hospital, freeing up space for other patients and putting the brakes on an exponentially increasing number of cases.