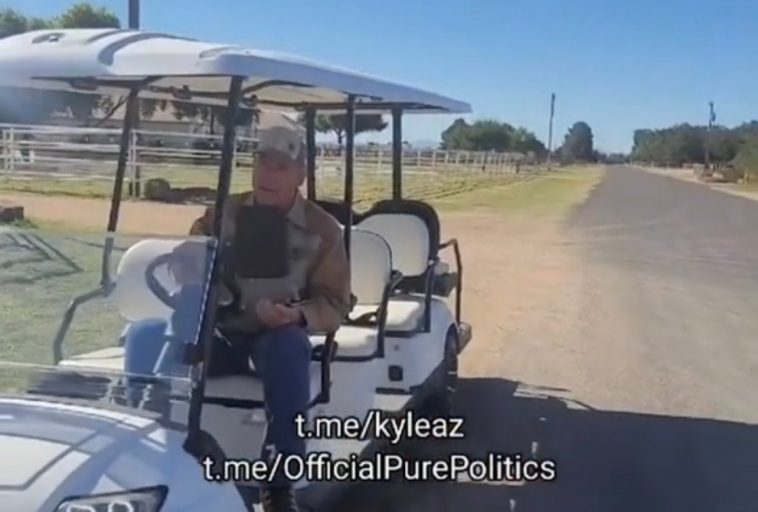 Just over a week ago, two citizen journalists – Kyle Becker and AmericanGreyson – confronted alleged Jan 6th FBI informant Ray Epps outside his ranch in Arizona about his role with the notorious ‘Oath-Keepers’ and why he had mysteriously disappeared off of the FBI’s persons of interest lists, managing to avoid getting charged with any crime.

Unsurprisingly, he wanted nothing to do with their line of questioning. Once he realized what the pair was there to do – he hopped on his golf cart and high-tailed it away.

MUST SEE VIDEO: Suspected Fed Operative Ray Epps Confronted at His Ranch on His Role in January 6 US Capitol Set-Up

On the eve of the January 6th protests, Epps can be seen on multiple videos encouraging the mayhem that eventually ensued the next day. In one video from the 5th, he can be seen wearing a MAGA hat while defending Antifa and telling the crowd they needed to “go into the Capitol.”

Epps can be seen on another video from the 6th leading the charge towards the Capitol. Once he arrives at the police barricades, he leans forward and says something to the people at the front of the line – which is when the agitators began their real push forward and knocked down the fencing.

Ray Epps “We Need To Go Into The Capitol” Supercut!
via @DarrenJBeattie pic.twitter.com/kJSnNXHI7z

It just doesn’t add up.

After Becker and Greyson confronted Epps at his ranch on October 27th and video of the incident went viral, they were contacted by Epps’ daughter – Tiffany Jones – who wanted to speak with them about her father’s role on January 6th and his potential involvement with the FBI.

Becker, with the help of the American Populist Union, was able to conduct a video interview, which can be found on his Youtube channel here.

During the interview, Tiffany Jones said that although she does not know “for sure” whether or not her father is an FBI informant, if he was, the news “would not surprise her at all.”

She had also only recently found out about Ashli Babbit’s murder, for which she holds her father “personally responsible.”

On October 5th, just one day after the interview with Epps’ daughter was posted online, Greyson noticed a car suspiciously following him home from the grocery store. When he got home, he unloaded his groceries, went inside, and within minutes received a knock at his front door.

What a coincidence… It was two Federal Agents with the FBI.

THIS VIDEO IS EXCEPTIONAL:

We have now been followed home and questioned by the FBI after our videos confronting Ray Epps as an alleged Federal Informant and interviewing his daughter. The FBI claims not to know who Ray Epps is.@kyleisbased@AmericanGreyson pic.twitter.com/oq5NpLXtuO

Becker spoke with The Gateway Pundit on Sunday to provide some more details:

Julian Conradson, TGP: So, you posted the interview with Epps’ daughter on November 4th – was it on the 5th when the FBI made contact with Grayson?

Kyle Becker: So just to give a timeframe, a week ago, me and my friend Greyson approached Ray Epps at his ranch. After posting that video it went pretty viral, and his daughter reached out to me on twitter, [so] I did an interview with her hosted by the Populist Union.

After that interview – the next day after posting it – the FBI followed Greyson home from the grocery store – he saw their black vehicle following him – then when he parked and unloaded his groceries, he got a knock on the door.

TGP: So, they stopped up the street and waited until he went inside?

TGP: When they made contact, were they asking Greyson anything in specific?

Becker: “Yeah so alot of the stuff we had to cut out because they went indside his home – his family was on camera – so he didn’t want to post [that part] because of all the personal information.

He [Greyson] actually attended January 6th and January 5th some of the events that took place – he did not go inside the capitol, nor was he involved in violence or anything like that. The FBI seemed to be asking questions about if he caught any violent acts on camera while he was there. He told [the agents] that he actually did meet Ray Epps on Jan 5th – he was in the crowd with him and obtained footage of him.

So that seems to be some of the questions they were claiming to ask when they were first there and he [Greyson] asked them: Well this is kind of a coincidence that you guys are here after all this Ray Epps stuff is coming out that he is kinda focusing on

They claimed not to know who Ray Epps was. They were asking questions like: oh, Who is Ray Epps? Can you tell me more about him? – almost like they were fishing for information as to what we knew.

TGP: Did the agents give a reason for why they decided to show up that day?  – so close to you two breaking the Epps encounter and the interview with his daughter.

TGP: When they finally left, did they have any requests for Greyson?

Becker: Yeah, they left a business card and they asked if they had any more information that we want to report, to give them a call.

TGP: So to be clear the FBI has never attempted to contact either of you before – not even through call or text?

Becker: Nothing no, and I’m fairly confident that they are trying to reach me as well.

The astounding lengths that the federal law enforcement agencies have gone to throughout this witchhunt over January 6th should alarm every single American.

These two conservative journalists were simply asking questions, and because they started turning over stones that they weren’t supposed to look under, they received a visit from two federal agents – a la’ oppressive hellholes like Communist China or Pravda Soviet Russia.

Right now, the conduct by federal agencies is unprecedented, and sadly, does not seem like it will get better anytime soon, especially with ol’ crisis-Joe running the show. The swamp is doing everything they possibly can to prop up the bogus ‘insurrection’ lie, and they are willing to take reckless steps to cover their own crimes.

Intimidating two citizen journalists is just the tip of the iceberg.