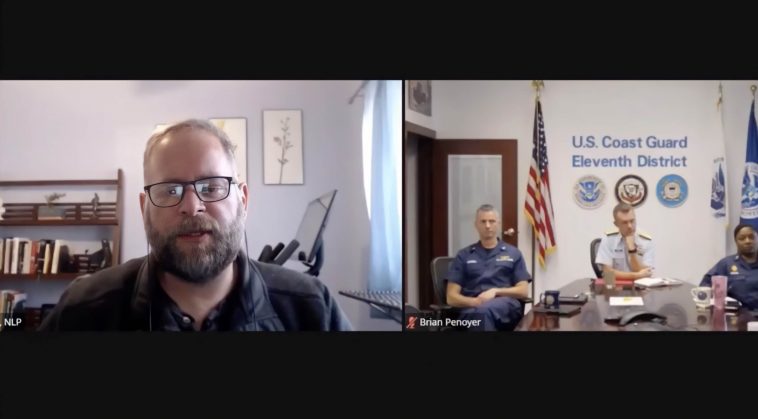 The Gateway Pundit obtained an exclusive video from a US Coast Guard training.

In the video high-ranking Admiral Brian Penoyer, who oversees District 11 Unit in the Coast Guard, uses taxpayer money to force Coast Guardsmen in this district to undergo 2 hours of politically one-sided and biased indoctrination under the guise of “identifying misinformation on social media” during a Zoom meeting.

The Eleventh Coast Guard District encompasses the states of California, Arizona, Nevada, and Utah, the coastal and offshore waters out over a thousand miles, and the offshore waters of Mexico and Central America down to South America.

Members of the US Coast Guard who are stationed in California were given mandatory training last December 3rd. The training was given to them via Zoom.  The 11th Coast Guard District Commander teamed up with the News Literacy Project (NLP) on how to identify misinformation/disinformation on the internet. The training was presented by NLP’s senior director of professional learning, John Silva.

News Literacy Project (NLP) describes itself as “a nonpartisan national education nonprofit, provides programs and resources for educators and the public to teach, learn and share the abilities needed to be smart, active consumers of news and information and equal and engaged participants in a democracy.”   At least that’s who they claim to be on their website.

NLP’s website claims to be non-partisan.  Yet, a quick search through their website and you can find documentation of their media partners and regular donors throughout the years including CNN, Reuters, AP, WaPo, MSNBC, NPR, Washington Post, Rockefeller Foundation, and many other fake news mainstream media outlets.

How ironic, they’re partnering with the same media who gave zero skepticism to the Russiagate hoax or the obviously fake Trump dossier or Jussie Smollett or Nick Sandmann’s accuser or Kyle Rittenhouse’s prosecutors or “Let’s Go Brandon” chant or any number of fake news media episodes that left-wing outlets pushed on the gullible American public and never apologized for.

According to the whistleblower, most of the training was about identifying obvious fake news memes on the internet, etc.

However, towards the middle of the training, John Silva switched gears and started spewing propaganda without displaying facts or research to back up his claims.

According to our whistleblower source:

“It soon became obvious that this “training” was set up by the D11 Commander to pressure/shame military members who are vaccine-hesitant into getting the Covid-19 jab.  The speaker claimed it was dangerous that this misinformation has gotten to military members which prevented them from willingly taking this vaccine.  He also stated misinformation has compromised national security by us not getting vaccinated.  All of the fact-checking examples were one-sided and blatantly left-leaning.”

“It seems that military leadership is attempting to indoctrinate their subordinates into only having the views/beliefs that they possess by teaming up with an obviously left-leaning organization and require us to sit through two hours of propaganda under the guise of “news and social media literacy”.”

“Overall, it’s worrisome that a high-ranking admiral who is in charge of District 11 (California mostly) in the Coast Guard is using taxpayer money to force Coast Guardsmen in this district to undergo 2 hours of politically one-sided indoctrination under the guise of “identifying misinformation on social media.”

At the 1:39 mark, John Silva was saying that because of misinformation, there are now members of the Armed forces who are refusing to be vaccinated. He added that misinformation on the safety and efficacy of vaccines can be a threat to unit security and national security.

At the 14:00 mark, Silva said that some of the disinformation is trying to erode our trust in our elections, in our political system, in our government, and our elected officials.

At the 20:00 mark, he said that there’s a lot of disinformation and conspiracy theories about the security of the 2020 election.

At 22:10, he showed a screenshot of a “homeopathic doctor who is trying to gain business by posting misinformation on Instagram about efficacy off face masks, vaccines” He accused the doctor of sharing misinformation just to rise up as an influencer.

At mark 23:23, he said that America’s Frontline Doctors are not all medical doctors some of them are chiropractors, homeopathic doctors, etc. And as a group, they are generating anti-vaccine disinformation and pushing alternative treatments like Ivermectin, the Horse Paste, as well as HCQ, treatments that do nothing to treat COVID-19 or provide any kind of immunity. He accused them that everything they do is about raising their prominence.

At mark 25:41, he presented two screenshots of two people claiming that Ivermectin is a legitimate cure and how it helped them beat COVID-19 as an example of altruistic people. He accused Tik-Tok of having a major conspiracy theory problem.

There are more interesting topics John Silva mentioned on the training that are all leftist propaganda until the end.

This is the filth they are using to indoctrinate our military today.