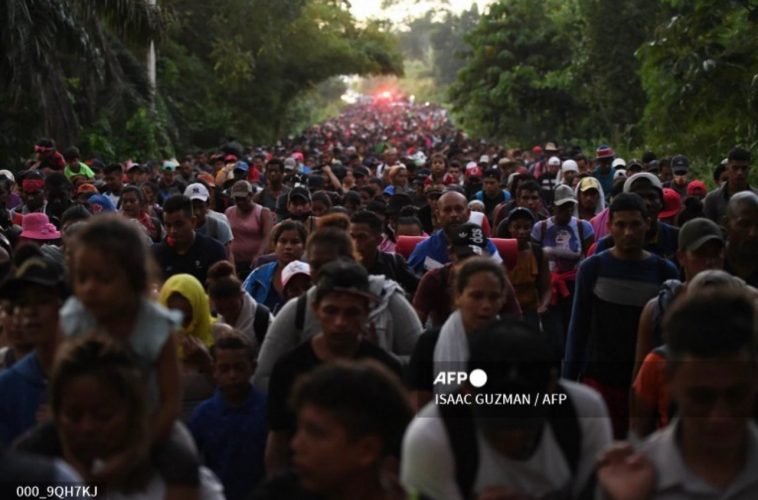 The Gateway Pundit reported that over 95 thousand migrants were moving through southern Mexico seen carrying “Joe Biden is for all” signs.

San Luis City in Yuma County, Arizona, borders Mexico and California in the Southwest corner of Arizona. It is the largest border city in Arizona.

On Saturday, San Luis Police Chief Richard Jessup told TGP what his department is expecting with the coming wave of illegal immigration. Chief Jessup has heard multiple alarming reports of multiple large groups that are splintering into smaller groups depending on how the cartel is running the operation. The groups are splintering off towards ports of entry in California, Arizona, and Texas.

1,600 or more immigrants are known to be just south of the border in Mexico and more groups are coming from the south. The invasion is expected to begin early this month.

Chief Jessup hopes that the mayors and local Government leaders in Mexico will play ball and cooperate with U.S. law enforcement to divert and corral the caravans, but it’s a game of waiting and seeing.

One of the caravans was offered a package with visas by Mexican authorities but they declined as the Biden Regime rolled out plans to give $450,000 to aliens that were “separated” at the border.

“We’ve had over 114,000 apprehensions this year alone”, said Jessup. “7,000 of those have literally gotten away. That means went undetected, crossed, and we couldn’t catch them and God only knows where they’re at.” 114 different countries are represented in these apprehensions including 17 that they know “are special interest groups with terrorist ties.”

Most of the people coming across are just “seeking Border Patrol, saying ‘where do we go and how do we fill out paperwork?’ And that’s their mentality.”

Last week, Law enforcement had a “tabletop” exercise to prepare to go into “emergency operations mode” and prepare logistics for an Emergency Operation Center. The EOC serves as a location to accommodate and track all of the law enforcement, and different organizations involved in the operation.

Arizona Governor Doug Ducey may send the Department of Public Safety or the National Guard in to secure our border from this foreign threat. The Emergency Command Center will house these different agencies.

“We’ll see 15,000-18,000 people cross over into the United States a day”, during agriculture season according to Jessup. It is now the growing season and they expect to see these numbers on a regular basis for the next 6 months. Some of these illegals have even breached residential areas, jumped into backyards and trespassed in homes.

A lot of these people are even flying into Mexico City or Brazil and making their way up to the U.S. “This is no longer take a boat, see if it capsizes, and come over.”

Many of them are unaccompanied minors and are likely being trafficked. Chief Jessup stated, “this is big business for the cartel,” and “they control who gets across the border”. Jessup has heard that the Cartel is charging as much as $10,000 per person.

The Border Patrol facilities are “literally full” but our tax dollars are solving this issue by paying for airplanes to ship noncitizens off to San Diego, Tucson, and El Paso, after Border Patrol “vets” them. “Once they step off that plane, God only knows where they go, what they do, waiting for their court date.” Jessup said, “I’m hearing that their court dates right now are four to five years away.”

The Gateway Pundit reported that in El Paso, illegal immigrants (on their free plane ride) were given priority over paying customers and even veterans.

CAUGHT ON VIDEO: Illegal Aliens Get Priority Over American Citizens in Boarding Flights from Texas (VIDEO)

The same process applies to the illegals that are bussed around the state and country to be taken to hotels, funded by American taxpayers.

When asked what if the vetting process includes a COVID-19 test or proof of vaccination, Jessup said he believes,

Immigrants are picked up by BP and taken to facility to be processed.  They are not tested for COVID19.  Once processed they are turned over to ICE who then tests them, and arrange transportation to where they are placed which includes deportation, or bused, flown, etc to other cities.

This is another attack on American liberties and an abhorrent waste of our tax dollars.

While American citizens face losing their jobs over vaccine mandates and COVID foolishness, poor and uneducated illegal immigrants, exposed to infection, fly across our country with our rapidly diminishing money.