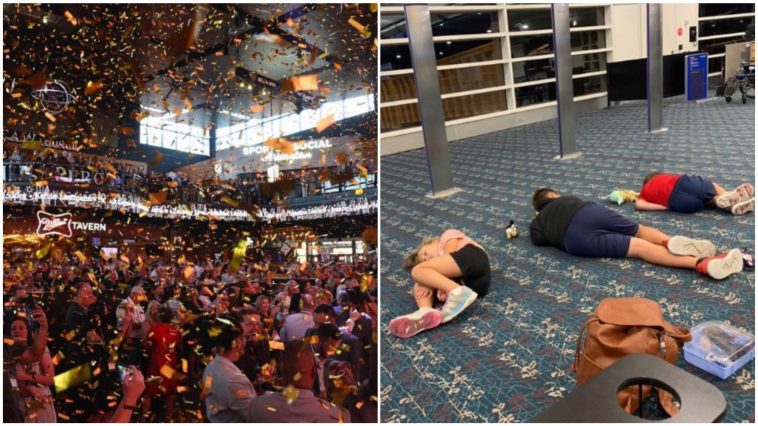 A senior flight crew member who worked for 20 years in Southwest Airlines has reached out to Gateway Pundit about the “hypocrisy we have seen on a daily basis” on the company.

Jen Psaki also claimed that the ‘little hubbub’ with Southwest Airlines had nothing to do with vaccine mandates.

Southwest employees gathered outside of the airline’s headquarters in Dallas on October 18 to protest the company’s vaccine mandate.

Now, a senior flight crew exposed Southwest Airlines for violating their own policy of mask mandates and no social distancing while celebrating a 50-year anniversary party in Arlington, Texas.

Here’s the excerpt from the email:

“Let me start with the weekend of the meltdown. How this escaped the press still is baffling but the following information should really upset everyone impacted the weekend of our meltdown that was blamed on “weather”. That very same Saturday night that stranded customers were sleeping on terminal floors across America, Southwest Airlines management and employees were partying it up (mask free and zero social distancing) for a 50-year anniversary party in Arlington, TX. Pics below include a very tongue-in-cheek message on the marque about alcohol killing germs.” Not a mask or social distancing in sight! Southwest Airlines’ management was on stage. Far-right is SWA’s Chairman of the Board, Gary Kelly. Confetti dropped as passengers were literally stranded at airports across the country with kids sleeping on dirty floors. “The hypocrisy doesn’t stop there. Yesterday Southwest Airlines released a statement concerning expressing political views on the job in reference to the “Let’s Go Brandon” PA that was made by a SWA pilot over the weekend. They are also reiterating our social media policy for workers that we are not to discuss our political leanings as employees of Southwest Airlines. For well over a year now, though we’ve been inundated with crew members who wear Black Lives Matter Pins/masks as well as masks promoting gay/trans rights. Even the flight attendant union TWU 556 who is supposed to remain neutral on all issues has no problem promoting leftist agendas on their social media pages. I’ll include just a few instances of what would certainly be a social media violation by Southwest’s own definition. (Fusion is a Facebook group for Southwest Airlines flight attendants and the following are screenshots from that page). Even union members and board members can’t help but display their political beliefs in plain sight on social media platforms like Twitter.” “I’m hoping you can help expose the hypocrisy here at Southwest and the toxic and hostile work environment that our management continues to create by enforcing rules for only the employees whose political beliefs don’t align with their own woke nonsense.”