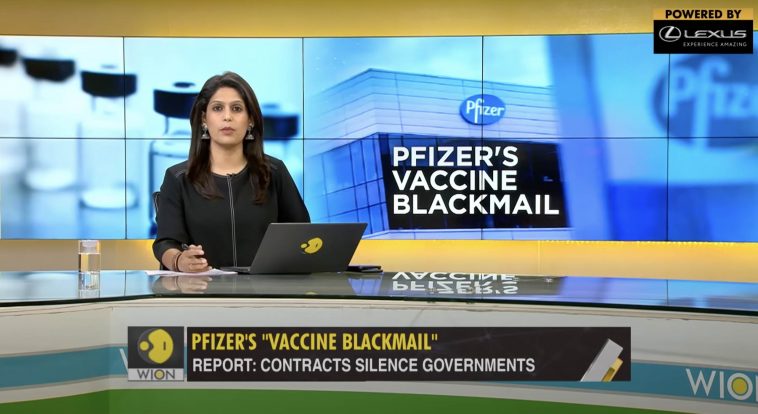 WION Gravitas, a popular prime-time show in India that brings viewers news and discussions on concurrent issues and across the globe, exposed in a recent episode how Pfizer bullies and blackmails countries for shots and took a hard line in the push for profit.

A non-profit organization called Public Citizen obtained a confidential unredacted Pfizer contract of some of its negotiations. The contracts show how Pfizer can stop countries from speaking about its contracts, block vaccine donations, unilaterally change delivery schedules and demand public assets as collateral.

“The contracts offer a rare glimpse into the power one pharmaceutical corporation has gained to silence governments, throttle supply, shift risk and maximize profits in the worst public health crisis in a century,” Public Citizen reported.

The table below is an example of the countries where Pfizer has contracts.

Gravitas’ anchor, Palki Sharma Upadhyay said that desperate countries are being forced to make humiliating concessions to Pfizer. They found out some serious revelations. Below are the 6 key points on the Pfizer contracts that were revealed.

You can read the in-depth analysis on each bullet on the Public Citizen website or download the full report here.

The video from the WION channel has now garnered 36 thousand likes and almost 7 thousand comments on Youtube. Surprisingly, Youtube has not deleted the video yet or banned their channel.

We uploaded a copy of the video on our Rumble account. Watch:

The Gateway Pundit reached out to Pfizer for comment.