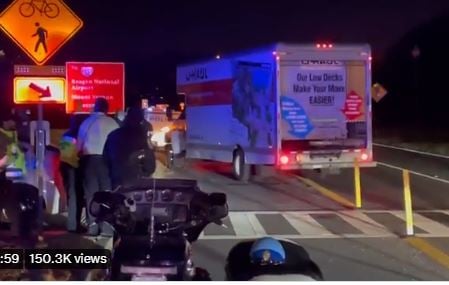 As Patty McMurray reported earlier at The Gateway Pundit—

On Saturday, a group of masked men, who no one has ever heard of, headed to Washington DC. They marched to the Lincoln Memorial and then almost as quickly as they came, they marched back to the UHaul trucks that brought them to the event.

The Left immediately made up stories about the group and their ties to “right-wing” extremists and “white supremacy.”

The only problem is…no one on the right has ever heard of these guys. Conservatives, however, seem to think they have a pretty good idea about where this new group came from.

Disclose TV reported on the group. Ryan Hunsader responded with a hilarious GIF.

Conservative Art Taking Back America asked if this group is “Another false flag?

Now this…
As the marchers fled Washington DC — Several Uhaul trucks pulled up to drive them off.

These marchers were either Feds or Democrat operatives.
Or both.

These guys are definitely feds pic.twitter.com/j0LQSeHsZs

It wasn’t just one U-Haul