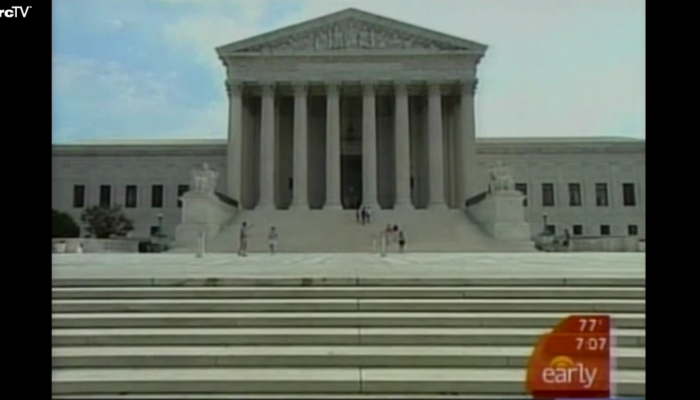 This week, the Supreme Court heard arguments over a potential blockbuster Second Amendment case, one in which the conservative majority appeared poised to overturn New York’s (and other states) restrictions on who can get a concealed carry permit. But if that happens, don’t expect the network newscasts to celebrate this as a “historic” decision. Those only count at the Supreme Court when liberals win.

Back on June 26, 2008, the Supreme Court issued what is probably the biggest, historic gun rights decision. The Court’s conservative majority definitively stated in the Heller case that the Second Amendment was an individual right. Yet, the next day, the three network morning shows collectively yawned at this major gun rights win.

On June 27, 2008, the CBS Early Show allowed a scant 30 seconds. NBC’s Today managed just 90 seconds and ABC’s Good Morning America only 93 seconds. That’s just three and a half minutes to the most important gun rights case in the last 100 years, out of an available six hours of air time.

Then-Good Morning America anchor Kate Snow began with an annoyed tone: “The Supreme Court’s ruling Thursday that Americans have a constitutional right to own guns is already triggering a flood of lawsuits. Advocates of gun rights are now vowing to challenge every limit on gun owners rights and big city mayors are vowing to fight back.”

On the Today show, then-co-host Natalie Morales tried to be cutesy: “Thursday’s Supreme Court ruling striking down Washington, DC’s handgun ban is having recoil effect in other cities around the U.S.”

The Early Show’s Russ Mitchell only featured the gun control side in his brief story: “Yesterday the justices shut down a Washington, D.C. gun ban. Chicago has one that’s very similar. And the ruling angered Chicago Mayor Richard Daley.”

So if gun rights supporters win big this term in the Supreme Court, don’t expect to hear about “history” from the network newscasts.

Transcripts of the limited June 27, 2008 coverage from the morning shows can be found below. Click “expand” to read more.

KATE SNOW: The Supreme Court’s ruling Thursday that Americans have a constitutional right to own guns is already triggering a flood of lawsuits. Advocates of gun rights are now vowing to challenge every limit on gun owners rights and big city mayors are vowing to fight back. Our Dan Harris explains.

DAN HARRIS: This morning in San Francisco, the first in an expected avalanche of legal challenges to gun laws as a result of the Supreme Court ruling. A lawsuit against the city which bans handguns in public housing.

CHUCK MICHEL (California Rifle and Pistol Association): And in the process deprives them of the right to choose to own a firearm to defend themselves or their families.

HARRIS: Chicago and several surrounding suburbs are also bracing for similar challenges. They have laws that are similar to the one the Supreme Court overturned. Chicago’s mayor is not happy.

MAYOR RICHARD DALEY (D-Chicago, Illinois): Why don’t we do away with the court system and go back to the old west? You have a gun and I have a gun and we’ll settle in the streets.

HARRIS: Across the country a whole range of gun regulations could now come under attack from rules requiring mandatory trigger locks to bans on assault weapons. Gun control advocates are confident their side will win out, but they worry that their hands will be tied in the meantime, in the fight against urban violence.

ROBYN THOMAS (Exec Dir, Legal Community Against Violence): We have a great concern that resources will have to be spent defending good laws that are already on the books.

HARRIS: The Supreme Court may have answered one big question about guns in America, but now other questions will soon emerge in a courthouse near you. For “Good Morning America,” Dan Harris, ABC News.

PETE WILLIAMS: Just a few hours after the most important ruling ever on gun rights, pro-gun groups went to court to challenge Chicago’s hand gun ban. An angry mayor defended the ban and called the Supreme Court’s ruling frightening.

CHICAGO MAYOR RICHARD DALEY: Do you think your next door neighbor should have an oozy, and AK-47, any type of a gun? Do you really believe that? Good luck.

WILLIAMS: The Court said the Second Amendment right to bear arms applies to individuals, not just members of militias striking down Washington, DC’s ban on handguns, the Court said they’re well suited for self-defense, especially at home where the five-member majority said the “need for defense of self, family and property is most acute.”

WAYNE LAPIERRE, EXECUTIVE VICE PRESIDENT, NATIONAL RIFLE ASSOCIATION: It’s vindication for Americans all over this country that always knew it was their freedom worth protecting.

WILLIAMS: The NRA said it would challenge gun restrictions in San Francisco and might take on licensing requirements in New York City where the mayor said his city’s background checks will hold up.

NEW YORK MAYOR MICHAEL BLOOMBERG: You have a right under the Second Amendment, we’ve always believed, to hold, to have a pistol or to have a rifle. What you don’t have a right to do is to hold one if you are a criminal.

WILLIAMS: The court said cities can still put restrictions on gun ownership but exactly which ones will keep court battles going for years to come. Pete Williams, NBC News, at the Supreme Court.

RUSS MITCHELL: That Supreme Court ruling that Americans have a right to own guns is still a hot topic of discussion this morning. Yesterday the justices shut down a Washington, D.C. gun ban. Chicago has one that’s very similar. And the ruling angered Chicago Mayor Richard Daley.

RICHARD DALEY: The Supreme Court and Congress has no obligation to keep our country safe. It falls on the backs of mayors and your local officials.