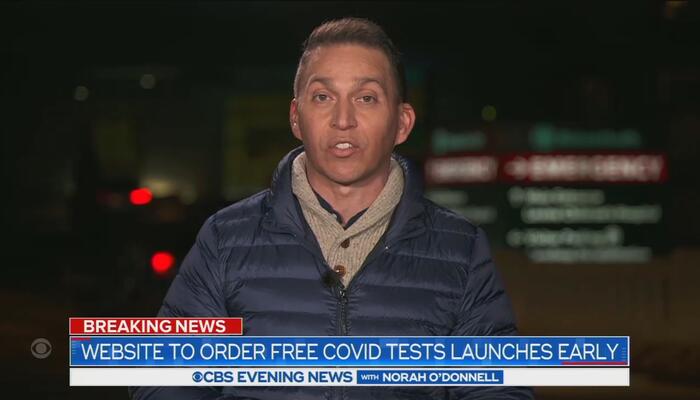 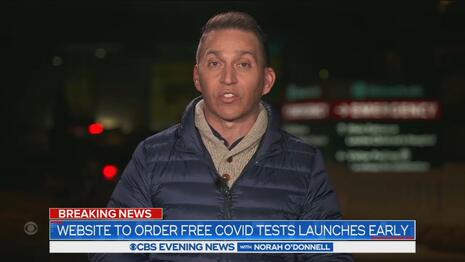 A day before the official launch of the Biden administration’s COVID test website, CBS Evening News omitted a key detail of the story surrounding its launch. The website has suffered numerous reported glitches, a detail that CBS obviously doesn’t want you to know because it makes their friends in the Biden administration look bad.

During a segment on the continued rise in cases of the Omicron variant, CBS News national correspondent Manuel Bojorquez reported on the launch of the new website where Americans can order COVID tests to be delivered directly to their homes:

Today, as long lines persist at some testing sites across the country, the federal government’s website to order rapid tests, covidtests.gov is live. People can order up to four tests per household which will ship within seven to twelve days.

What was conveniently missing from that report was how many people who are trying to order tests are running into issues processing their orders. For example, some people who live in apartment buildings aren’t able to submit their orders because the website doesn’t recognize their address.

Because tests are limited to four per family, some residents are unable to order tests if another family living in another unit in the same apartment building orders four tests. The website doesn’t recognize that there are multiple apartment units in a building. This is apparently too complicated for CBS to explain to viewers. They would much rather hide this failure from their viewers, lest it humiliates their pals in the Biden administration.

This latest example of bias by omission from CBS Evening News was made possible by Prevagen, Tylenol, and Salonpas. Their information is linked so you can let them know about the biased news they fund. CBS has also asked that you text Norah O’Donnell your thoughts on their news coverage at (202) 217-1107.

MANUEL BOJORQUEZ: Good evening, Norah. Here in North Carolina, even as cases surged, some testing sites had to shut down over the weekend due to the winter storm, and there could be more bad weather on the way this weekend. But tonight, the federal government says there’s another option for the near future. Today, as long lines persist at some testing sites across the country, the federal government’s website to order rapid tests, covidtests.gov is live. People can order up to four tests per household which will ship within seven to twelve days, the latest effort to try to bring down the number of cases and hospitalizations. This comes as fears that Omicron, which may cause less severe disease, may cause more deaths. Modelers are predicting 50,000 to 300,000 more Americans could die by mid-march.

DAVID MUIR: Good evening and it’s great to have us with us here on a Tuesday night. And we begin tonight with the pandemic. That new government website to sign up for free at-home COVID tests is now up and running tonight. A day early, but of course, not a day too soon. Four free tests per household and it comes amid the Omicron surge across much of this country still.

STEPHANIE RAMOS: Tonight, that new website where Americans can start ordering four free at-home tests, covidtests.gov, up and running a day ahead of the official launch tomorrow. Families across the country are already placing their first orders. Some who live in apartments having no problem. Others running into glitches when trying to order to the same address as other tenants. Netia McCray tried ordering for elderly relatives who live in apartments.

NETIA MCCRAY: I noticed it was saying that four tests had already been requested from this household. There has to be a way that we can work around this, that it has to know the difference between an apartment and the apartment building.

RAMOS: McCray’s orders eventually going through, after she searched for the addresses by zip code, and went backwards. The White House acknowledging there could be some hiccups at first.

JEN PSAKI: Every website launch, in our view, comes with risk. We can’t guarantee there won’t be a bug or two.

RAMOS: And, again, here’s where you can get those free covid tests. Visit the site, covidtests.gov. It officially launches tomorrow. Now each household will be able to order up to four tests and they will ship out in 7 to 12 days. So those first orders will arrive by the end of January, and early February. Now, the White House says they will also launch a call line for those who don’t have computer access. David?