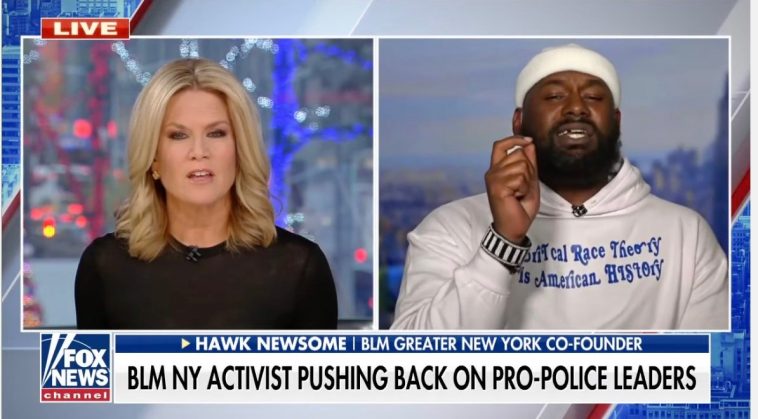 100 Percent Fed Up – Black Lives Matter of Greater New York Co-Founder Hawk Newsome appeared with Martha MacCallum of Fox News’ to discuss a spat he’s having with NYC’s Mayor-elect Adams. Fox News started the segment with a clip of Hawk Newsome issuing a threat in response to a plan by New York City’s incoming Mayor Eric Adams to put plainclothes police officers back on NYC’s crime-ridden streets. “There will be riots. There will be fire, and there will be bloodshed…” I am not threatening anyone; I am just saying that as a natural response to aggressive oppression, people will react,” the BLM leader warned. NYC Mayor-elect Adams responded to Newsome’s dangerous rhetoric at a NYPD Athletic League event, “We’re not going to surrender to those who are saying, ‘We’re going to burn down New York.’ Not my city.” “It’s about bringing back a sense of protection in our city and not the disorder we feel at this time,” Adams said. “We’re going to go after the violent crimes we’re witnessing, particularly the over-proliferation of handguns. I’m going to put in place an anti-gun unit, plainclothes, and we’re going to do precision policing and go after those gangs and gun users.”

The Blaze– Newsome claimed that Adams “does not have a plan.”

MacCallum interjected, “He does have a plan. He’s going to put the anti-crime unit police unit back on the street.”

Newsome defended his position by saying, “Crime isn’t just up in New York City. It’s up around the country, so what is he going to do that’s different other than talk?”

MacCallum pointed out that violent crime skyrocketed after the unit was disbanded and noted, “21 children have been killed in the streets of New York, mostly in gang violence,” citing a New York Post report from October.

Newsome responded, “Ok, there’s this thing called the Constitution. The Fourth Amendment protects us against illegal search and seizure.”

MacCallum was losing her patience with the arrogant, racist and disrespectful guest who continued to speak over her and ignore her requests to allow her to respond to his untrue statements. Newsome, whose “Critical Race Theory is American History”  message across the front of his sweatshirt, outs him as a person who pushes racism over truth, continues to bulldoze over the host. The last straw came when he told MacCallum that because of her “white privilege,” she had no right to talk about how to fix crime in the city where she works every day. “Come on, don’t throw that at me,” the Fox News host responded as she rolled her eyes in exasperation.

The BLM co-founder continued to disrespect the frustrated Fox News host for the remainder of the interview.