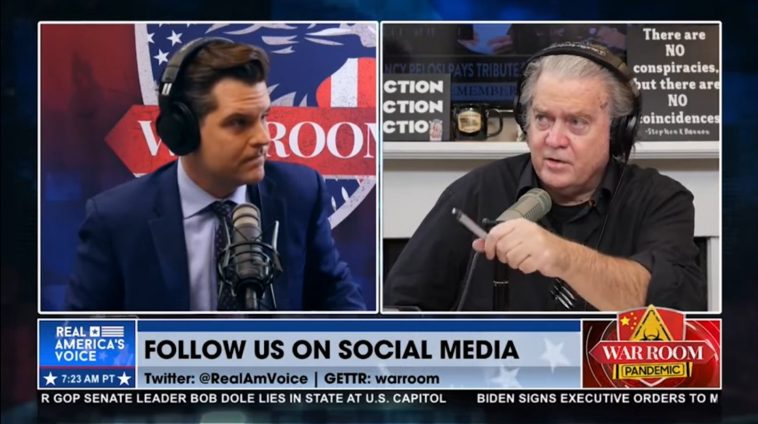 Steve Bannon again called for an army of GOP operatives to overhaul government.

The liberal media did not appreciate this last time.

On Thursday, Representative Matt Gaetz (R-FL) joined Steve Bannon’s War Room podcast to discuss the America-first plan to use “4,000 shock troops” to replace the corrupt federal bureaucracy if and when Trump is re-elected in 2024 (or sooner).

If all goes according to plan, the ‘army of patriots’ would immediately take over the jobs of federal employees who have been entrenched within Washington and have helped maintain the swamp’s corruption throughout the past few administrations.

The move to bring in that many new hires and political appointees would be unprecedented by an incoming administration, but after what we saw from the bureaucrats during Trump’s first four years, this action is necessary to ensure that his America-first policies are not undermined throughout the process.

“People didn’t like that Donald Trump raised his voice but sometimes you’ve got to raise your voice to raise a ruckus and to raise an army of patriots who love this country and will fight for her.

We’re going to operationalize the performance to go right after the people who are imposing the vaccine mandates, who are enriching themselves, and who are selling out the country.”

Bannon wholeheartedly agreed, calling the plan a new “theory of governing.” He says the army of patriots should be getting ready now so they can be trained and ready to “man the government” when Trump is back in charge.

This is Trumpism in power, he says, and it’s going to bring “hardcore accountability” to the crooks in the Federal government who have sold out the people for long enough.

As he says, there will be no more “powderpuff derby” – it’s about to get serious.

“Understand, this is a theory of governing. It’s fresh and it’s new. This is Trumpism in power.

That’s when we went to the 4,000 shock troops we have to have that’s going to man the government. Get them ready now. Right? We’re going to hit the beach with the landing teams and the beachhead teams and all that nomenclature they use when President Trump wins in 2024 — or before.”

You’re going to have those as the 4,000 political appointees. No more powderpuff derby. This is going to be hardcore accountability at every committee [in Congress].”

Gaetz went on to say that he is pushing to be named as chairman of the House Judiciary Committee, and if he gets his wish, they are going to start in the areas where they can weed out the most corruption – the DOJ and the FBI.

“We’re going to go after this administrative state and we’re going to start at the Department of Justice and the FBI.

That’s the job I want. You know, send me over to the Judiciary Committee and their sphincters will tighten because they have been doing a lot of corrupt things over there.

I don’t need a new committee, I just need a gavel.”

Trump made the mistake in his first term of not weeding all of these lifelong, unappointed bureaucrats who have been selling out America’s interests in pursuit of the swamp’s power and profits. This is exactly the thing he must do to DRAIN THE SWAMP.

When Trump gets back in, let’s hope the reckoning will come with him.