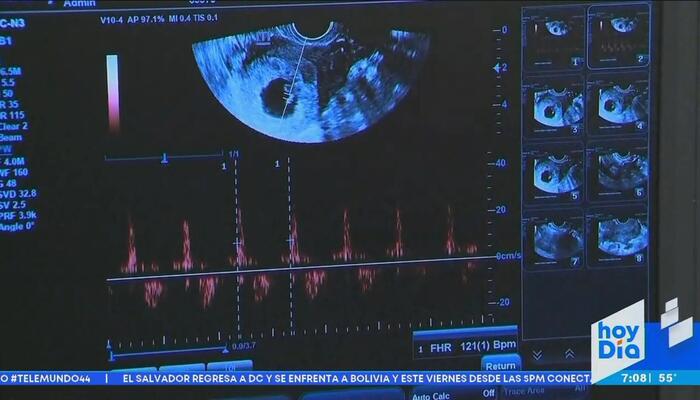 The viewers of Telemundo’s Hoy Día learned a new pronoun for the unborn: product. Yup, babies are now products, as per a report featuring anchors Nicole Suárez, Nacho Lozano and veteran journalist Martin Berlanga, who catches himself as he is about to say “baby” in a report about the Texas Heartbeat Law, and stopped mid-word to replace it with the callous, dehumanizing term.

Watch as three Telemundo journalists discuss the “restrictive” Texas abortion law that saves babies as if referring to a robot:

One curious novelty in this report that pushes the same fallacies about abortion (including that at six weeks of pregnancy women don´t know that they are pregnant) is a newfound sympathy for Brett Kavanaugh, who the liberal media hope will turn pro-abortion.

According to Berlanga: “And what experts now question is, if the law is blocked, whether others will give up on their attempts at similar laws; but for it to be blocked this time, one of the judges of the Supreme Court would have to change his position to the decision made a week ago. And, it is believed that the most vulnerable one to do so could be the conservative justice Brett Kavanaugh, who is more sensitive to public opinion, and to the image that the highest judicial power in the country is giving the population.”

Whatever the Supreme Court finally decides, no child deserves to be objectified. In truth, a person who calls a baby “a product”, raises a red flag, not for the person´s view of human life, but of his own.

To read the complete transcript of the segment mentioned above please press on Expand.

NICOLE SUAREZ: But we’re going to change the subject because all eyes are on the Supreme Court, which on Monday is going to review the controversial Texas abortion law.

NACHO LOZANO: We are two months away from its enforcement. The restrictive measure represents a challenge to women’s reproductive rights set out in the constitution. Martin Berlanga is with us at the main table and will explain what is at stake today.

MARTIN BERLANGA: Nacho, Nicole, good morning. There are many things at stake, especially the right to decide for your body, in the case of many women, but also the right of many others defending the right to life for that bab… eh, product. The Supreme Court once again resumes the debate over the Texas state law banning most abortions, which will be debated again. This law, known as SB8, is something that does not normally happen because the court, the Supreme Court, had already taken a stand and allowed the law to remain in force.

The arguments that will be heard today in the Supreme Court are to determine whether the Justice Department can sue the state of Texas to stop the implementation of the law that prohibits most abortions after six weeks of pregnancy or as soon as fetal heartbeats are detected, that is, before women realize they are pregnant, and without exception in cases of rape or incest.

ACTIVIST: We know that the Texas Heartbeat Bill saves

BERLANGA: We know that the Heartbeat Bill saves about 100 lives a day from abortion, say activists in favor of the law. Likewise, the Supreme Court will review certain parts of the law that allows any citizen to sue anyone who helps a woman to access abortion services. The same goes for a doctor, as for an Uber driver.

PRESIDENT JOE BIDEN: I’d have been…

BERLANGA: The President supports the abortion law as it has been for more than 50 years. He avoided the question when in Italy he was questioned about being excommunicated for supporting such a measure. He paraphrased the Pope about who was he to judge.

The law signed by the Texas governor in May sparked protests across the country.

EXPERT: The question is whether an order of blocking the state

BERLANGA: And what experts now question is, if the law is blocked, whether others will give up attempts at similar laws; but for it to be blocked this time, one of the judges of the Supreme Court would have to change his position to the decision made a week ago. And, it is believed that the most vulnerable to do so could be the conservative judge Brett Kavanaugh, who is more sensitive to public opinion, and to the image that the highest judicial power in the country is giving the population.

Throughout this month, the Supreme Court will hear a series of cases that could change abortion law in the United States. By the month of December, we could already see the results like with another law, for example, that is just as restrictive, or almost as restrictive, in the state of Mississippi that prohibits abortion after 15 weeks of pregnancy. But we insist: it is not the constitutionality that is being debated today. Basically, whether or not the Department of Justice can file a lawsuit against the state of Texas.

SUAREZ: We know the Supreme Court is a conservative majority, so let’s see what happens with that.

BERLANGA: Of course, but in the previous vote it was 5 to 4, 2 abstinences, so let’s see. If one crosses the other side, then a completely different decision could be made.

LOZANO:  A very interesting the debate especially thinking, as I said this morning xxxx, where does the influence of the state end regarding such a personal decision that had already been legislated, that had already been, let’s say, harmonized with the legislatures and with the state laws. According to the life and decisions of the women themselves; a conservative majority, but an opportunity to set a precedent for what is to come not only in Texas, but also in Mississippi.

BERLANGA: There are many other states that are willing to file similar lawsuits and also to put similar initiatives into place.

SUAREZ: Martin, thank you very much.