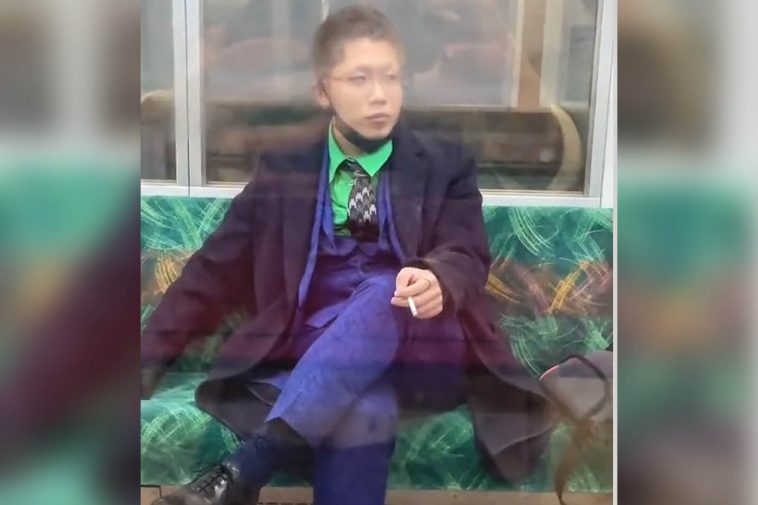 A young man dressed as the famous Batman villain the Joker went on a Halloween rampage that injured at least 17 people including 3 serious cases on board a Tokyo train bound for Shinjuku.  He then started a fire in one of the train’s wagons on Sunday.

The suspect was identified as Kyota Hattori, 24, who was arrested and investigated for attempted murder. Before he was taken into custody, Hattori was seen sitting and casually smoking after stabbing and spraying hydrochloric acid on passengers. He told the police that he regrets not killing anyone in the attack.

🚨 | NEW: The alleged attacker in Japan, in a “Joker” costume. Sitting and casually smoking after stabbing and spraying hydrochloric acid on passengers on a train in Tokyo, and then setting everything on fire

His motive was not yet disclosed by the authorities but local news reported that hat he wanted to be executed when they arrested him for attempted murder.

About two hours before the incident, Hattori visited Tokyo’s Shibuya district, a hot spot for costumed partygoers to celebrate Halloween, the police said.

Of the 17 injured people, a man in his 70s was in critical condition after allegedly being stabbed by Hattori in the chest as the Keio Line train was moving around 8 p.m. The suspect also allegedly started a fire on the train using lighter fluid.

The other 16 victims aged between their teens to their 60s sustained minor injuries including smoke inhalation.

He was also quoted as saying he had failed in work and had troubles in relationships with his friends.
The incident took place on a 10-car train bound for Shinjuku, a busy station in central Tokyo, from Hachioji in the west of the capital, causing panic among passengers who scrambled to escape through train windows.

The train made an emergency stop at Kokuryo Station in Chofu, western Tokyo, but its doors did not open immediately.

Its operator Keio Corp. said the train did not stop at the right position and that staff decided not to open any doors to prevent passengers from falling through a gap between the train and the platform. The driver was unaware of what had happened on the train at that time, the company said.

Police found a knife, several plastic bottles which possibly contained lighter fluid and an aerosol can in a train car.

Following the incident, the transport ministry asked all the railway companies in Japan to strengthen vigilance to ensure safety.