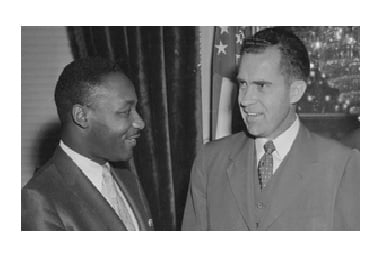 Grand Old Partisan reminds us today of Dr. Martin Luther King Jr.’s meeting with Vice President Richard Nixon in 1957. They met on Capitol Hill for a discussion of ways to overcome Democrat opposition to the Republican civil rights agenda.

That’s something that you won’t hear about today from the liberal media.

The civil rights movement was led by Republicans.

When the Civil War ended, and after Republican President Abraham Lincoln liberated the slaves, Democrats initiated Jim Crow laws to punish blacks. Democrats discriminated against blacks. In fact, the KKK, was founded as the the terrorist wing of the Democrat Party.

The last KKK official to serve in Washington DC was former Senator Robert Byrd, a KKK kleagle. Byrd was a Democrat and close friend of Joe Biden.