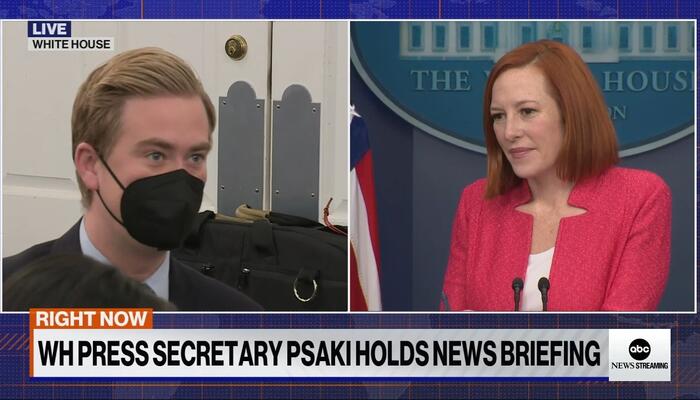 Longtime journalist James Rosen made his White House briefing debut on Thursday as White House correspondent for Newsmax, so it was no surprise he got right to work grilling National Security Adviser Jake Sullivan on foreign policy and Press Secretary Jen Psaki on Biden being responsible for inflation and vaccinations.

And, better yet, he had plenty of help with hardballs from even the Associated Press, Bloomberg, and Time magazine. Not to be left out, Fox’s Peter Doocy appeared on Friday’s Psaki Show episode and pressured Psaki on what many see as incendiary rhetoric from Biden.

Sullivan was Thursday’s special guest, so Rosen had solid questions if they found “any evidence of any impropriety” from a Team Biden review of Donald Trump’s interactions with Russian President Vladimir Putin and then whether the world view the White House’s threat of Russian sanctions if they invade Ukraine as “a position of…weakness” (click “expand”):

I assume — you’ll correct me if I’m wrong — that in preparation for President Biden’s first summit with President Putin, held in Geneva last June, the national security team undertook a comprehensive review of the official documentary record of all the interactions that President Trump had with President Putin. You may recall — during the Trump presidency, we saw reporting to the effect that Mr. Trump and/or his aides took some steps to prevent the maintenance of a full record of those interactions. Without asking you to disclose any classified information, can you assure us on two points: Number one, did your review uncover any evidence of any effort, at any point along the way in the creation and storage of those records, to tamper with that process? And number two, did your review uncover any evidence of any impropriety of any kind or severity on the part of President Trump in his interactions with President Putin?

Going to Psaki, he wanted to know where “the buck stop[s] with the President” seeing as how the White House has taken credit for “economic metrics that showed great progress across 2021” while chalking up problem areas like inflation to what he deemed “external factors.”

Psaki largely ducked it, so Rosen tried again before wrapping with two questions on whether Biden has “any evidence” for “having success” in convincing Americans to get vaccinated:

ROSEN: So your answer is: Yes, he owns the job creation, he owns the low unemployment rate, and he also owns inflation. Correct?

PSAKI: I think any President should own everything happening in the country and the President certainly sees it that way.

Before Rosen, the AP’s Zeke Miller wanted to know “why is the President taking these steps now” to set up a government testing website and hand out free masks when he could have “three months” ahead of the holiday testing and omicron surges.

Miller followed up, pointing out the obvious fact that “he could have done the exact same thing three months ago when, you know, maybe it would be in effect now when the need is obviously greater than — than is — than the system has capacity to deliver right now.”

But perhaps the question of the day came from Bloomberg’s Justin Sink (click “expand”):

SINK: I mean, frankly, things just seem like they’re going pretty poorly right now for the White House. You know, Build Back Better is being blocked. Voting rights is being blocked.  Diplomatic talks with Russia doesn’t seem to have brought us back from the brink of war. Inflation is at a 40-year high. The virus is setting records for infection. So, as we kind of hit this one-year period, and a period where everything seems like it’s in pretty rough shape, or nearly everything — which is not an invitation, I guess, to list off — [LAUGHS] — some other things — I’m wondering, at what point do you take stock and say that things need to change internally, whether it’s your outreach with the Hill, whether it’s the leadership within the White House.  You seem to be stymied on an incredible number of fronts right now.

PSAKI: Well, let me give you a little bit of a different take on this. More than 200 million people are vaccinated. We’ve had record job growth, record low unemployment rates — historically, in this country, over the last year. We’ve rebuilt our alliances and our relationships around the world and right now, as it relates to Russia, as you heard our National Security Advisor convey, we’re working with partners around the world to convey very clearly: It’s up to them to make a choice about what’s next. We’re not going to make that on their behalf. It’s up to them to determine if there are going to be crippling economic sanctions or not, or — if they decide to move forward, but we also recognize when you have a small margin and threshold in the Senate, it’s very difficult to get things done and to get legislation passed and the fact that the President, under his leadership, got the American Rescue Plan passed, a Bipartisan Infrastructure Bill with 19 [Republican] votes in the Senate, about 6 [Republican] votes in the House. The fact that we are still continuing to work with members to determine the path forward on Build Back Better; that we have the vast majority of Democrats in the Senate supporting voting rights. That’s a path forward and our effort is to do hard things, try hard things, and keep at it, so we just don’t see it through the same prism.

SINK: So, the sense is things are going well; there’s no need for change right now?

PSAKI: I think that having worked in a White House before, you do hard things in White Houses. You have every challenge at your — at your feet — laid at your feet, whether it’s global or domestically and we could certainly propose legislation to see if people support bunny rabbits and ice cream, but that wouldn’t be very rewarding to the American people, so the President’s view is we’re going to keep pushing for hard things, and we’re going to keep pushing the boulders up the hill to get it done.

To close out the briefing, Bennett twice tried to have Psaki explain what Biden’s “planning to do differently…in the second year that shows that he’s listening to” the American people seeing as how “he’s ending his first year underwater” with more people disapproving of him than approving.

Friday wasn’t any better for Psaki (although it was shorter).

FEMA administrator Deanne Criswell was Psaki’s opening act and Doocy inquired about “what’s the point of now sending” masks to people if many of them wear down. Criswell pushed back on that, insisting “[m]asks save lives, I think, is the important thing here.”

And when he got to face Psaki, he fired off this scorcher: “President Biden promised to bring decades of D.C. experience to the office, but Build Back Better has not passed, voting rights apparently not gonna pass, and vaccine requirements that he likes are, apparently, illegal. What happened?”

Psaki cited the American Rescue Plan and the bipartisan infrastructure package as proof of a successful year, but that obviously left out the failures Doocy mentioned (as well as, for example, Afghanistan and inflation).

Doocy upped the ante, calling out what’s seen as Biden’s incredibly divisive rhetoric placing anyone who disagrees with him in the same breath as those guilty of treason and segregationists (click “expand”):

DOOCY: But, as about a year ago and working with Republicans, now he is talking about Republicans that don’t agree with voting rights — he’s describing them as George Wallace, Bull Connor and Jefferson Davis. What happened to the guy who, when he was elected said to make progress, we must stop treating our opponents as our enemy?

To see the relevant briefing transcripts from January 13 and 14 (including more surprisingly tough questions, a few softballs, and Psaki commenting about her relationship with journalsits), click here and here, respectively. 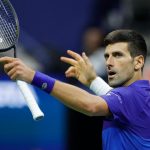 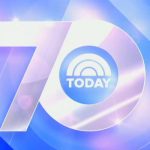