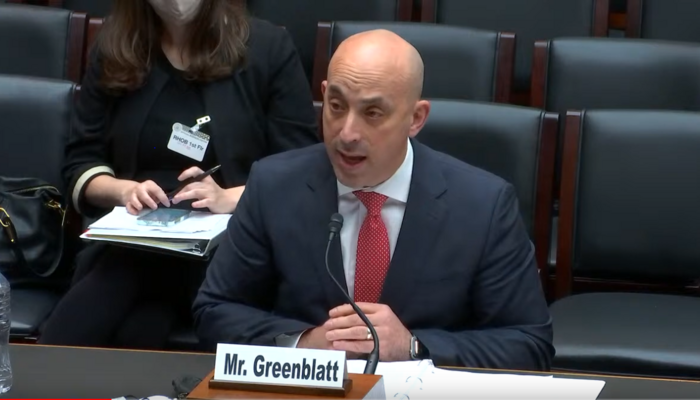 A leftist figurehead blatantly told lawmakers on Thursday that so

Anti-Defamation League CEO Jonathan Greenblatt said social media companies should sanitize their platforms of “misinformation” and “hate speech” in testimony for a House Energy and Commerce Consumer Protection and Commerce Subcommittee hearing. But then he hypocritically complained that Facebook in August “de-platformed” ADL fellow Laura Edelson, who Greenblatt said was “studying” the role that company may have played leading up to the Jan. 6 so-called “insurrection.”

“Platforms should not be able to thwart important third-party research at their whim,” Greenblatt said.

Ironically, in his verbal and written testimony, Greenblatt spouted familiar hyperbole used to stifle dissent from the leftist worldview.

“We have seen the fatal consequences of white supremacist extremism that often has a clear nexus to social media,” he said.

“These targeted mass shootings were motivated by extremist conspiracy theories that were spawned and spread on social media,” he said.

Greenblatt lauded Facebook “whistleblower” Frances Haugen, and touted legislation introduced in the House that would give financial incentives for whistleblowers at tech companies who report internal data and security practices that apparently harm consumers.

But was Haugen really a whistleblower? After she resigned from Facebook in May, The Wall Street Journal revealed a trove of files, provided by Haugen, which she portrayed as evidence of Facebook’s indifference to so-called right-wing “misinformation” that she perceived, according to TIME, as implicating national elections and contributing to the Jan. 6 Capitol Hill Riot. Haugen also called for increased online censorship during a recent Senate hearing.

The public emergence of Haugen’s left-skewed, Orwellian talking points could motivate more whistleblowers to exhibit faux-courage by resigning from their companies and peddling the liberal narrative that curbing free speech is necessary for Americans’ safety. The introduction of financial incentives in Rep. Jan Schakowsky’s (D-IL) FTC Whistleblower Act could also motivate more “whistleblowers” like Haugen to cast blame on social media companies for supposed pro-right-wing bias.

MRC Free Speech America recently outed Facebook for implementing a policy, at the behest of internal activists, that discriminated against white people and men, and selectively protected certain minorities.

Among other things, Greenblatt’s organization has declared the “OK” hand gesture as a hate symbol, called for private companies to unite to scrub “hate” from the internet and to help “inform” the financial industry and law enforcement in “mitigating extremist threats.”

“There’s guys been banned for questioning masks… .It’s very strange who’s sitting in a position of power and able to do these things,” Kernan said. “And I don’t want to give anyone that power.”

Conservatives are under attack. Contact the ADL at (202) 452-8310 and demand that the organization clearly oppose biased online censorship.