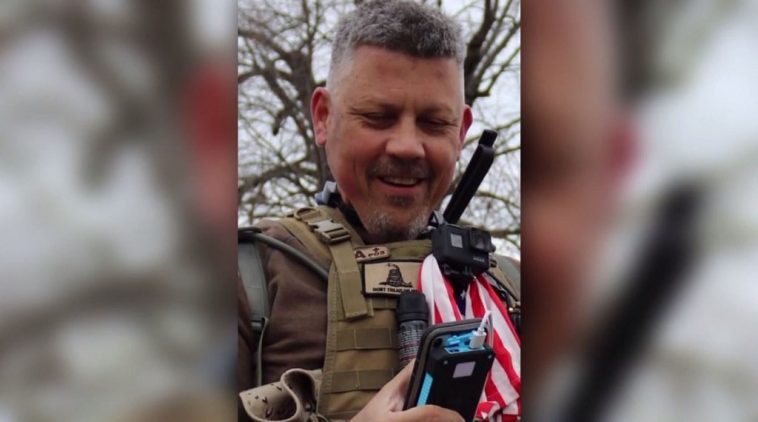 On Wednesday, a federal judge ordered that a January 6th political prisoner be immediately transferred out of the DC Gulag after an unannounced US Marshals inspection of the facility found detainees were forced to live in “deplorable” conditions and were denied necessary medical care.

The defendant, Chris Worrell, was diagnosed with non-Hodgkins Lymphoma while incarcerated and has been denied his cancer treatments for months. He will immediately be transferred to another facility outside of DC, where they will release him into home detention “as soon as possible” so he can receive much-needed chemotherapy for his worsening illness.

Jan. 6 Political Prisoner Chris Worrell Calls into Greg Kelly’s Show from Jail – Guards Have Not Given Him Access to His Cancer Drugs for 166 Days! (VIDEO)

He is just one of 400 other inmates who will be transferred out of the jail – Unbelievably, none of the hundreds of other Jan. 6th detainees are included in the transfers, according to reports.

In his decision, Judge Royce Lamberth said the conditions at the facility were so terrible that they were “beyond belief” and added that the “court has ZERO confidence” in Pelosi’s Gulag to provide proper treatment and NOT retaliate against Worrell if he was allowed to remain in their custody.

Over the objection of Biden’s DOJ and citing disgusting, punitive conditions in DC Jail, Lamberth releases cancer patient and J6 detainee Chris Worrell to home incarceration so he can be treated for cancer. https://t.co/4LXM0XUiBT

Some of the horrifying conditions that were found in the inspection included: water being shut off for days, clogged toilets that would flood cells with sewage, and an inmate who developed an infection from being pepper-sprayed after not being allowed to wash the chemical off for days.

Water would be shut off as a form of punishment for detainees who ‘misbehave,’ often for several days at a time – taking away their ability to wash hands, flush the toilet, or even drink water.

Keep in mind, these people who are being subject to this kind of horrifying treatment are AMERICAN CITIZENS – it’s unthinkable.

The report also gave evidence that the behavior of staff at the jail was even worse than the unbelievable conditions. US Marshals observed DC corrections officers and staff “agonizing detainees,” denying them necessary medical care, and threatening them to “not cooperate” with the Marshals during the inspection. One was even seen telling a detainee to “stop snitching” on the staff, according to the report.

The situation had gotten so bad that last month Judge Lamberth urged Biden’s DOJ to conduct a full civil rights investigation into the despicable mistreatment of Jan. 6th detainees under the watch of DC Jail Warden Wanda Patten and director of the Department of Corrections Quincy Booth.

Lamberth even went as far as holding the pair in contempt because they had repeatedly delayed paperwork that was needed to approve surgery for Worrell on his pinky finger after they had deemed the procedure “elective.”

According to court filings, federal prosecutors argued that Worrell was denied medical treatments because he lies about his health, unbelievably claiming that they have been “unable to sort fact from fiction.” To support their bogus accusation that Worrell is lying, they cite “medical notes and records that the government later obtains” in order to “refute or at best unsubstantiate” him needing medical treatment.

In other words, Worrell asks for medical assistance for an issue, and the staff creates the records telling him why he is a liar and doesn’t need it.

Alex Stavrou, the attorney representing Worrell, was outraged by the characterization of his client, clarifying that every one of the medical issues he sought help for was valid and required some form of medical attention.

According to Stavrou – through no fault of his own – Worrell never received chemotherapy even ONCE.

“Mr. Worrell also suffers from Non-Hodgkins Lymphoma. To date he has not recieved chemotherapy. He has never caused any delay in seeking treatment for his cancer.

We are pleased with the court’s order allowing Mr. Worrell to obtain the life-saving cancer treatments he needs. We are also pleased that over 400 inmates will be transferred to facilities where they will recieve proper treatment and care, and not be subjected to the deplorable conditions noted in bt the United States Marshals investigation.”

Worrell had traveled to DC with his girlfriend on January 6 to hear then-President Donald Trump speak and exercise their right to freely protest the 2020 presidential election. Due to the violence from the left towards Trump supporters, he wore a protective vest lined with plastic while also legally carrying a small bottle of pepper spray for protection.

Following the Stop the Steal rally, Worrell followed the crowd of thousands of people to Capitol Hill to protest. The situation was peaceful at first but escalated when suspicious agitators began to push through police barriers to get into the Capitol building.

Despite following the crowd to the grounds, Worrell never entered the building.

In videos he recorded on the scene, Worrell can repeatedly be heard calling for peace. One of the clips from his phone captures him telling an officer that he was “not coming through,” when he accidentally bumped into a barricade trying to back away from the escalating situation.

During the chaos, Worrell saw people that he believed to be Antifa pushing towards the police. He maintains that he discharged his pepper spray towards the people he believed to be leftist agitators in an attempt to protect the officers. The government claims that he was trying to spray the police, but has not offered any evidence to back this up. Eventually, they conceded that the government “do[es] not currently know with certainty the target at which Worrell was spraying.”

Despite his minor role and the government’s own admission that they don’t know who he was spraying, Chris Worrell was locked up in the Gulag for almost eight months.

Thankfully, because of this judge, he will serve the rest of his time awaiting trial in home confinement.

This was a huge win for Worrell, and for the patriots who are still being held in DC’s Gitmo – but it’s just a single battle in their fight for freedom – the swamp’s war against these conservative Americans wages on.

** You can donate to Chris Worrell’s defense fund here.