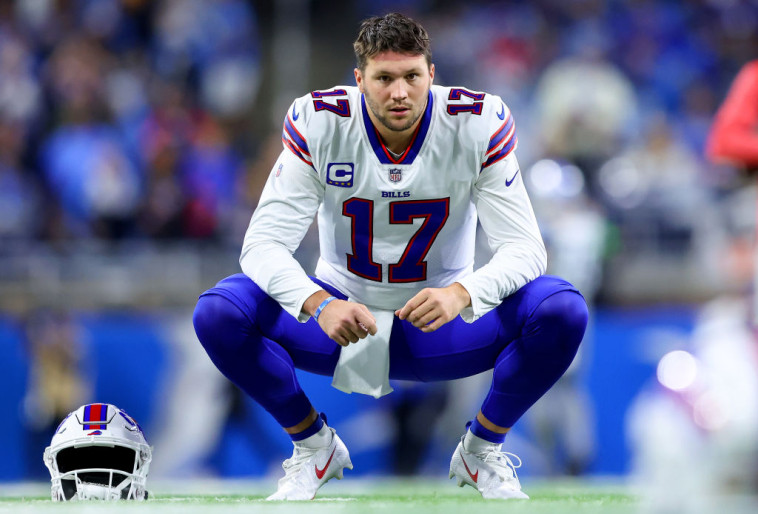 Buffalo Bills quarterback Josh Allen had a laugh Tuesday when he was asked about a conspiracy theory floating around that a body double filled in for Damar Hamlin at the Bills game on Sunday.

Hamlin, a 24-year-old safety for Buffalo, suffered cardiac arrest during an NFL game earlier this month. After a miraculous recovery, cameras panned over to the athlete supporting his team at Highmark Stadium, but since his face was covered and he was wearing a hood and sunglasses, theories spread online that it actually wasn’t Hamlin at the game.

the CBS camera feed got Damar Hamlin posted up like the banker from Deal or No Deal pic.twitter.com/IKWsiEtxOm

“Would you like to debunk that conspiracy theory, or maybe even confirm?” Allen was asked during an episode of the podcast “Kyle Brandt’s Basement.”

“One, that’s Damar’s swag,” Allen said of Hamlin’s covered face and sunglasses. “He likes wearing that.”

“Two, he was in the locker room with us pre-game. So, yes that was Damar,” he said. “There’s absolutely zero chance. That’s the Damar Hamlin, that’s our guy, that’s our brother. He was with us pre-game, post-game, he was up in the suite with his family, his little brother, 100%.”

Hamlin suffered cardiac arrest following a tackle against the Cincinnati Bengals during the first quarter of an NFL game on January 2. The game was suspended and then ultimately canceled. Medical professionals administered CPR on the field, and Hamlin was whisked off in an ambulance some 16 minutes after the collapse. The athlete was treated at the University of Cincinnati Medical Center, where he was sedated while in critical condition.

Damar Hamlin suffered a cardiac arrest following a hit in our game versus the Bengals. His heartbeat was restored on the field and he was transferred to the UC Medical Center for further testing and treatment. He is currently sedated and listed in critical condition.

Hamlin was eventually transferred to a hospital in Buffalo, before being released to recover at home. Bills head coach Sean McDermott said last week that Hamlin had been at the practice facility “almost daily” and is “just trying to get back to a little bit of a routine.”

“That’s good news,” McDermott told the press. “He comes in and really just started — really today or yesterday — and just trying to get back to a little bit of a routine and getting himself acclimated again and taking it one step, you know, baby step at a time here.”

It’s unclear when Hamlin will return to the field, though it certainly won’t be this season. The Bills took a loss to the Cincinnati Bengals on Sunday, 27-10.

Related: ESPN’s Foxworth: I Root Against Josh Allen Because His Fans Are Patriotic Americans Who Like Dogs: ‘Really Concerning’