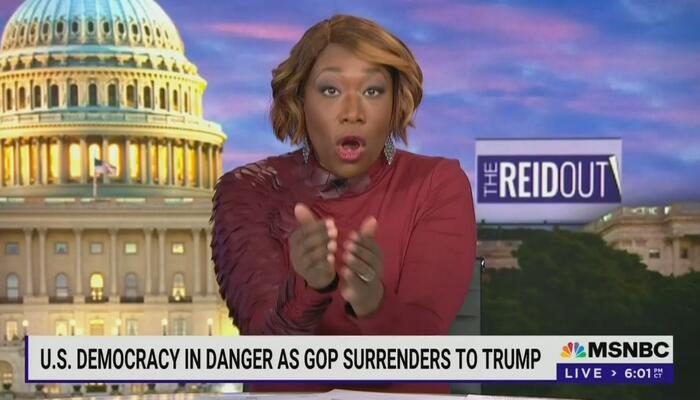 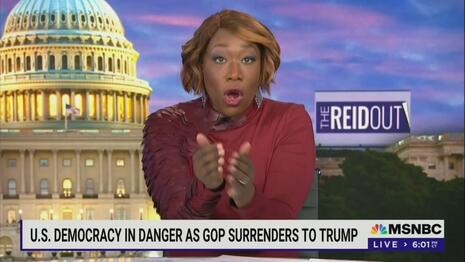 Judging from how desperately they are throwing around the race card, lefty hosts and reporters must be worried about a GOP comeback in the polls.

They spent the past month (leading up to key votes in states like Virginia and New Jersey today) depicting Republicans as racist obstructionists on everything from voting rights to the budget.

In just the past few weeks liberal media elitists like Joy Reid, Jonathan Capehart and Joe Scarborough have attacked Republicans for playing up “white grievance” on Critical Race Theory to “whip up” “working-class white men” to get “back into power.” All so they could stand “in the doorway” like “George Wallace” to deny “voting rights for all Americans.”

This past month also saw the Hollywood elites like Samantha Bee admit she held her fire on accused serial sexual harasser Andrew Cuomo because the former New York Governor was a “hero” who was “the only person speaking about the pandemic in a fatherly way.”

The following are the worst takes from the lefty media and Hollywood from October:

“[Virginia GOP gubernatorial candidate] Glenn Youngkin, who has vowed to ban teaching critical race theory….is locked in a dead-heat with Democrat Terry McAuliffe….Youngkin is endorsed by Mango Mussolini himself….The fight for the white suburb vote is happening there [Virginia], but also throughout the country, even in states like New Jersey with Republicans trying to seize control, based on playing on the delicate feelings of conservativ-ish white suburbanites. The tactic is nothing new. The Republicans have simply followed Trump’s lead, pouring high octane gasoline on cultural anxiety over jobs and societal change and weaponizing anything that makes white Christians feel icky.”
— Host Joy Reid on MSNBC’s The ReidOut, October 26.

“They’re not just saying the quiet part out loud anymore. They are shouting it from the freaking rooftops. More on the GOP’s embrace of violent ultra-nationalism….You have norm-core supposedly Republicans like Glenn Youngkin….people like Ted Cruz….they’re now normalizing and rubbing elbows with open white nationalism, white replacement theory, some really dangerous ideologies that are designed to whip up….working class white men, non-college white men.”
— Host Joy Reid on MSNBC’s The ReidOut, October 28.

“Whiteness Is a Hell of a Drug”

“It [a GOP gubernatorial victory in Virginia] would show that fear and anger win the day. The fact that we’re having a conversation about Critical Race Theory that is not taught in public schools in Virginia, it just goes to show how Republicans have decided that picking at white grievance and tap-dancing with white supremacy is their way back into power….If Glenn Youngkin wins, yeah, the Democrats should be afraid, because fear works. And I like to say, whiteness is a hell of a drug.”
— Washington Post columnist Jonathan Capehart on PBS NewsHour, October 29.

Co-Host Mika Brzezinski: “For the second time this year, Senate Republicans prevented the Freedom to Vote act from moving forward, after Senate Minority Leader Mitch McConnell said his party would oppose it.”…
Co-host Joe Scarborough: “The Republicans are, have taken obstruction to a new level….They blocked the vote. They stood, in sort of a schoolhouse door situation. They were like George Wallace. They stood in the doorway, and stopped people from being able to go in and vote to expand voting rights for all Americans.”
— MSNBC’s Morning Joe, October 21.

“So $1.75 to $1.9 trillion. Down from $3.5 trillion. Is that enough?…When you’re looking at four weeks of paid leave, in the context of maternity leave, instead of 12 weeks….Is that really delivering for poor and middle-class women?…Child tax credit….You’re seeing that being pared down….how is that not, you know, parents and particularly women, paying the price of these cuts here?…What do you need to preserve here, realistically, that you can get Joe Manchin to sign onto, that is going to deliver, that is really going to be something you can genuinely say, hey: this is a big step towards staving off environmental calamity?”
— Host Brianna Keilar to Democratic Congressman Ro Khanna on CNN New Day, October 20.

Republicans Like Cruz and Hawley “Ready to Burn Down the Country”

“These Republicans, you have people like [Republican Senator] Ted Cruz, you have people like, you know, [Republican Senator] Josh Hawley, these are people who are ready to burn down the country, as long as they could be President of the ashes. That’s what they’re doing. As long as they can be President of the rubble, they’re fine.”
— New York Times columnist Thomas Friedman on CNN’s Anderson Cooper 360, October 20.

Why Should We Treat Republicans Fairly When They Are Radicals?

“I want to dive right into your argument about what both-siderism is and why it’s failing the public….Is it that we’re treating Democrats and Republicans equally and ignoring GOP radicalism, is that the heart of the problem?”
— Host Brian Stelter to Los Angeles Times columnist Jackie Calmes on CNN’s Reliable Sources, October 24.

Worried “The Texas Brand” Will Spread Like Jim Crow

“[New York Times columnist] Charles Blow had this to say about Texas in his latest piece in the New York Times and we quote, ‘When Jim Crow was originally established, it spread from state to state like a contagion. Each subsequent state taking lessons from the ones before it. Mississippi was one of the states at the vanguard of the first Jim Crow. Texas may well be at the vanguard of the next.’…We’ve all become familiar with the Texas brand these days. Making it tougher to vote, making it tougher to get an abortion, no mask, no problem, no vaccine, no problem. If you want to carry a gun, that’s perfectly okay with us. Is there any indication this is going to be Texas’ leading export to other red states?”
— Host Brian Williams on MSNBC’s The 11th Hour with Brian Williams, October 15.

“[Texas gubernatorial Republican candidate] Allen West — he is the zeitgeist of the Republican Party right now….They want that sort of natural — all-natural flavor of racism, but they want it in blackface with a 1990s flat-top haircut….He will be the kind of person maybe Republicans in that state want. But here’s the problem: The state of Texas is not nearly as Republican as the idiots that they seem to want to have running.”
— MSNBC contributor Jason Johnson on MSNBC’s The ReidOut, October 11.

Pro-Life Women Are Hypocrites For Not Voting for Lib Spending

“Progressive movements have been hacking away at this pocket of white women who vote overwhelmingly Republican. Yet, there are still a significant many who, under the guise of conservative Christianity, who vote against things like universal pre-k for everybody, but are definitely for taking a woman’s right to choose away from them.”
— Host Tiffany Cross on MSNBC’s The Cross Connection, October 2.

“[Fox News] network is turning 25 and running lots of commercials celebrating its birthday.….The network evolved or devolved into the beating heart of the GOP, a heart with clogged arteries and weak muscles. It’s the network that brought us…..smothering patriotism after 9/11, and a portrayal of the U.S.A. that seems stuck in a time warp….Full of rage, anger. It’s the whitelash on TV….For the families who feel they have been torn apart by Fox, this week is not a happy anniversary.”
— Host Brian Stelter reporting on Fox News’s 25th anniversary as aired on CNN’s Reliable Sources, October 3.

So What If Andrew Cuomo Was An “A**hole,” He Was Still Our Pandemic “Dad”

“There were many, many times, actually, during the pandemic, where we had big…. show-wide conversations about, how do we handle [former New York Governor Andrew] Cuomo? Because he’s super problematic. But the story about him out in the world was like, he’s a hero. And he’s the only person speaking about the pandemic in a fatherly way. And he is our dad….So it felt [like] a place where it wasn’t quite the time to be like, ‘Hey, just like, check it out, he’s actually an a**hole.’ We felt like we would just miss completely with our audience.”
— TBS Full Frontal host Samantha Bee on October 11 New York Times’s “Sway” podcast hosted by Kara Swisher.

“I’m actually glad to get out of Hell for a minute. You know Rush Limbaugh has been talking my horns off.”
— Former cast member Jason Sudeikis reprising his Devil character on NBC’s Saturday Night Live, October 23.