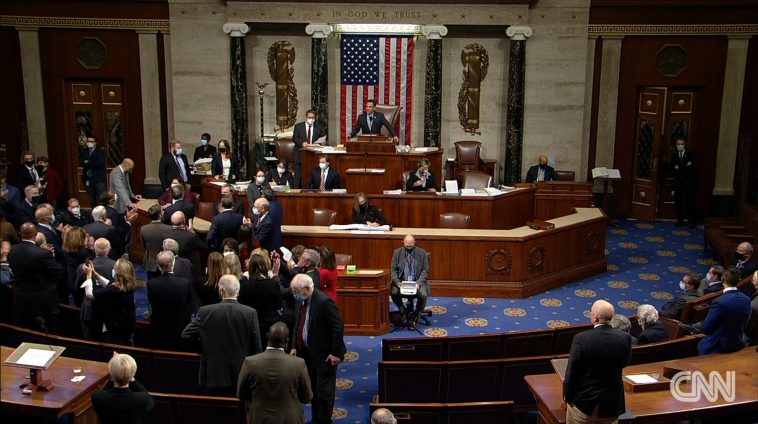 Shortly before midnight on Friday, House Democrats were able to successfully ram through Biden’s multi-trillion dollar infrastructure bill after voting 228-206 in favor of the disastrous spending plan.

With the help of thirteen RINO scumbags, Nancy Pelosi had enough support to pass the massive $1.2 trillion package in the late-night vote.

Here is the full list of Republican sellouts, and their office phone numbers, courtesy of Marjorie Taylor Greene – No surprise to see crybaby Adam Kinzinger on the list:

Every one of these traitors should start looking for new jobs.

Republicans who hand over their voting card to Nancy Pelosi to pass Biden’s Communist takeover of America will feel the anger of the GOP voter.

The bill will now head to Biden’s desk to be signed into law.

Despite being heralded by the media and swamp creatures alike as strictly an ‘infrastructure’ bill, the spending plan includes thousands of pages of insane progressive policies that will have a crippling and disastrous effect on everyday Americans for decades to come.

Only a fraction of the entire bill is going to be used on infrastructures like roads and bridges. Instead, the package is essentially a trojan horse of leftist anti-American radicalism. It is being used as an all-encompassing excuse to cram through the left’s Marxist ideology that has failed to gain any significant traction with the American public.

Republicans in the senate must hold the line to prevent this next package from going through, but with their track record, things aren’t looking too promising for everyday Americans.

One way to help change that is to make your voice heard and contact your representatives and demand they fight against this poisonous anti-American policy, especially if your representative was on the list of scumbags above – or this one below in the Senate.

JUST IN: Senate Votes to Advance $1.2 Trillion Infrastructure Bill – Here Are the 17 Republicans Who Voted with Democrats