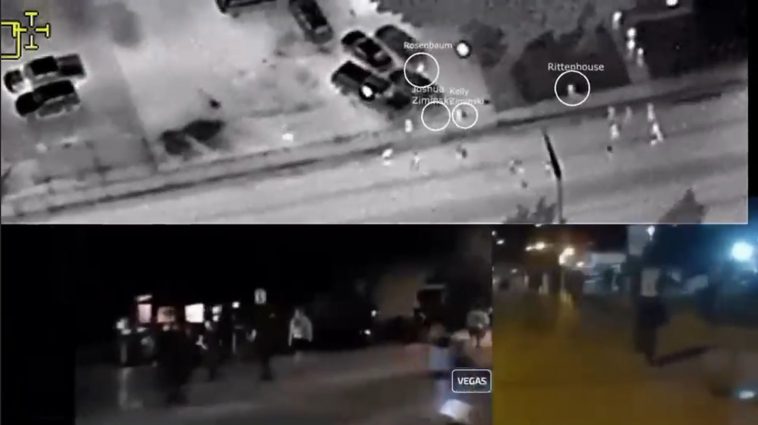 Human Events editor-in-chief Jack Posobiec has just released never-before-seen footage of Kyle Rittenhouse on the night he was attacked in Kenosha, Wisconsin during a violent BLM rally last summer.

Contrary to the ridiculous and false narrative that has been shamelessly peddled by the partisan media, Rittenhouse can be seen offering medical assistance to people on the street before overhead helicopter surveillance video captures the moments the violent crowd begins chasing Rittenhouse and attacking him.

Members of the mob can be heard yelling “let’s get him” as Rittenhouse desperately tries to explain he is not a threat. After yelling “FRIENDLY!” over and over as he ran, someone can be heard saying “you won’t do sh*t motherf*cker” as they continue gain ground.

The video is just the latest evidence that proves Rittenhouse did not go out looking to murder ‘peaceful BLM protesters,’ but was rather forced to act when the violent thugs put his life in danger – as is his right under state law.

The video that was just released was compiled by the FBI and had been buried until now… Really makes you wonder what else they are sitting on, especially when it pertains to January 6th.

Kyle Rittenhouse’s trial began this week in Kenosha. He has pled not guilty to the politically motivated charges because he acted in self-defense when he was attacked by 3 rioters who forced him to fire his weapon, which killed 2 of them.

In their report from that night, the police even included that another man who was in the crowd behind Rittenhouse had fired off a “warning shot” into the air, which gave Rittenhouse every reason to fear for his life when the group finally caught up to him and began assaulting him.

The judge in the case has already made the decision to ban calling the individuals who attacked Rittenhouse “victims” – they must instead only be referred to as “rioters and looters” throughout the trial.

At least the judge, in this case, is reasonable.

Hopefully, the outcome is justice for Kyle.