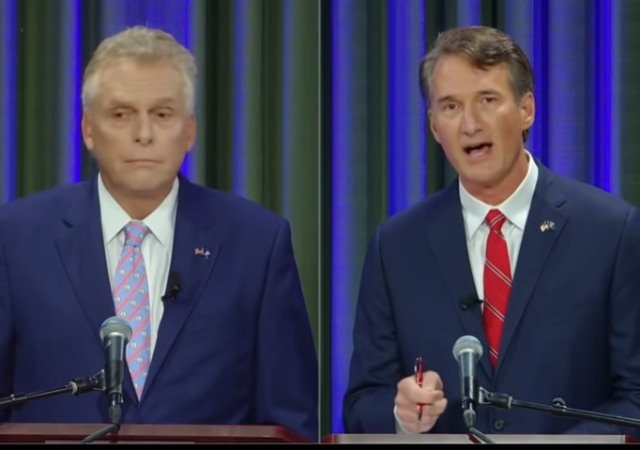 The campaign of Democrat candidate for Virginia governor Terry McAuliffe abruptly canceled an election eve rally in Virginia Beach set for 12:45 p.m. Monday, offering no reason as to why. McAuliffe has struggled to draw enthusiastic crowds as the rival Republican candidate Glenn Youngkin has held large, boisterous rallies of supporters across the state. Youngkin has a rally scheduled for Monday evening in Virginia Beach.

Republican Glenn Youngkin and Democrat Terry McAuliffe were both initially scheduled to hold events in Virginia Beach on Monday, Nov. 1, but a spokesperson for McAuliffe said he would no longer be having one in Hampton Roads.

Instead, McAuliffe will be campaigning today in a different portion of the state.

Youngkin is still on schedule to host a rally today at Neptune’s Park, which is located on Atlantic Avenue, at 5 p.m.

The McCauliffe rally was to be held at Smartmouth Brewing:

The Washington Times reported McAuliffe’s schedule before the cancellation:

“Democrat Terry McAuliffe is crisscrossing Virginia on the eve of the governor’s election, making stops in Roanoke, Virginia Beach, Richmond and Fairfax County.”

Photos from McAuliffe’s first stop of the day in Roanoke shows he drew an anemic crowd of a few dozen:

We are one day away from #ElectionDay in Virginia

This is his first stop of the day for his Get Out The Vote event. He’s heading to Virginia Beach after this. pic.twitter.com/lsvBmLThnE

McAuliffe is now taking the stage.

He’s promising voters if elected he will ensure:
-Teachers are paid above the national average
-All Virginians have access to broadband
-Virginians will have quality healthcare pic.twitter.com/LPRhgUWJN6

Stopped by FarmBurguesa in Roanoke for lunch on the road en route to Richmond. Thank you for having us this afternoon! See you soon Richmond! pic.twitter.com/Jvk0O5otxE

ROANOKE is fired-up and ready to #WinWithGlenn! Tomorrow, we are going to lock arms – not as Republicans or Democrats, but as VIRGINIANS! Head to the polls and help us make a statement that is heard around the Country. GO VOTE! pic.twitter.com/w1mHVX1x7b

Glenn Youngkin and his wife hit the stage in Richmond. It’s their second of four events today as they crisscross the state one final time before Election Day. pic.twitter.com/DQx4RJZJpi

The New York Times reported Sunday that McAuliffe crowds are so lame that staffers have to lead cheers, “When Mr. McAuliffe went to speak, the crowd yelled ‘Terry, Terry, Terry’ only after a campaign staffer started the chant to ramp up the energy in the room.”

This about Youngkin’s surge and McAuliffe floundering just days before the election is amazing.

“When Mr. McAuliffe went to speak, the crowd yelled ‘Terry, Terry, Terry’ only after a campaign staffer started the chant to ramp up the energy in the room.”https://t.co/4ovPS5twv4