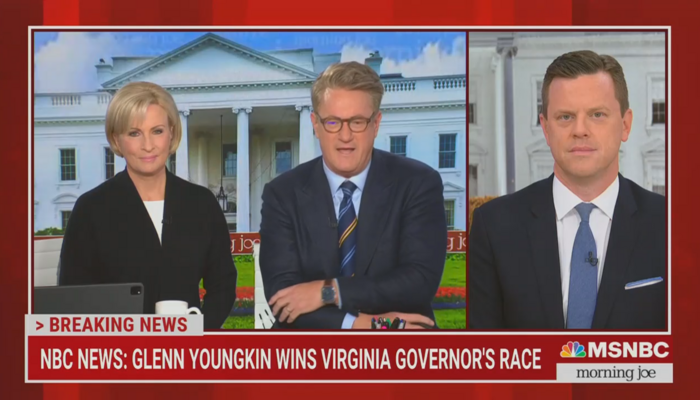 Joe Scarborough didn’t name names. He wants, after all, to be able to walk through the MSNBC cafeteria without being hit in the back of the head with a kale-quinoa salad.

But the Morning Joe host did take repeated shots this morning at MSNBC colleagues like Nicolle Wallace and Joy Reid who last night blamed Terry McAuliffe’s loss on Glenn Youngkin focusing on Critical Race Theory even though, they claimed, it isn’t “real.”

Scarborough’s point was that even if CRT isn’t being explicitly taught in public schools, wokeism is indeed present, has angered many parents, and is hurting Democrats at the polls: “Democrats are going to have to come face-to-face with this issue of wokeism….You have a lot of people  saying, oh, he won based on something that’s not real, that doesn’t exist….People say, oh, it’s just because they’re all racists. No, no, they’re lifelong Democrats…” He then told MSNBC colleagues and viewers: “People can get mad if they want to. Don’t shoot me…”

Joe also said that only “losers” would blame McAuliffe’s defeat on racism. He pointed out that Virginia went for Obama and Kamala, and Virginia didn’t turn overnight from being “enlightened” to being “racist.” Scarborough further warned: “Democrats are going to have to find a way to talk about it, rather than just saying it doesn’t exist and it’s not a problem. Because it’s a problem that hurt them last night….it’s really hurting Democratic candidates, and it will continue to.”

Katty Kay [who recently quit her job at the failed and disgraced Ozy Media] and John Heilemann grudgingly agreed, though Heilemann repeatedly cited “white grievance” as a factor in the race.

And Kay argued that it would have been “historic” if McAuliffe had won, given Virginia’s history of electing a governor from the other party the year after a presidential election. Nice try, but there would have been nothing historic about a McAuliffe win, given that Biden had won by 10% just a year before. Indeed, up until about a month ago, the conventional wisdom was that McAuliffe was on a glidepath to victory.

Scarborough did take an obligatory shot at Donald Trump. He claimed that Trump had a “very bad night” because Youngkin kept him in a “lock box” and wound up doing 13 points better than Trump had the year before. Scarborough suggested that Republicans around Virginia are seeing that, and realizing they can resurrect the old Republican coalition if they can keep Trump “the hell away, in Mar-a-Lago behind the gates.”

Joe Scarborough on Morning Joe suggesting that Democrats deny at their peril their problem with wokeism was sponsored in part by Liberty Mutual, SoFi, and Sandals.

JOE SCARBOROUGH: We need to talk about this around the table a good bit, because Democrats are going to have to come face-to-face with this issue of wokeism.

MICHAEL STEELE: They don’t know how to talk about it.

SCARBOROUGH: Not CRT, but wokeism. You have a lot of people  saying, oh, he won based on something that’s not real, that doesn’t exist: CRT, or wokeism, or whatever you want to call it. I can tell you [laughs], I mean, that’s all — I mean, I’ve said this on the show before.

People can get mad if they want to. Don’t shoot me, as Elton John said. I’m only the piano player.

SCARBOROUGH: But his is what we’re hearing. All the time, wherever we go, when nobody’s watching, when the cameras are off, and when people aren’t worried about people calling them bigots. It’s just happening. And that played out last night in Virginia.

KATTY KAY: If Mcauliffe had won last night, it would have been historic. Because it would have broken all of the models so far. So Democrats can take some solace from that.

SCARBOROUGH: It doesn’t exist, and it’s all about white grievance. And if that makes them feel good, awesome. You do you. I’ll do me. But it’s really hurting Democratic candidates, and it will continue to.

Can you believe the split between Youngkin and Trump? Youngkin plus 13 over trump.

SCARBOROUGH: This is just, I said early on in passing, last night was a very bad night for Donald Trump. Because there’s a guy who kept him in a lock box. He has favorability plus 13 over Trump. And every Republican in that state is going, okay, we’ve got to keep Trump in Mar-a-Lago behind the gates. Because when he stays the hell away, we win big, and we can get our old coalition back!

So, so, yeah: white grievance.

HEILEMANN: There’s some of it out there! A lot of Trump voters had that.

SCARBOROUGH: There’s a lot of white grievance out there. Totally get that. At the same time —

SCARBOROUGH: Because we’re dialectical around here.