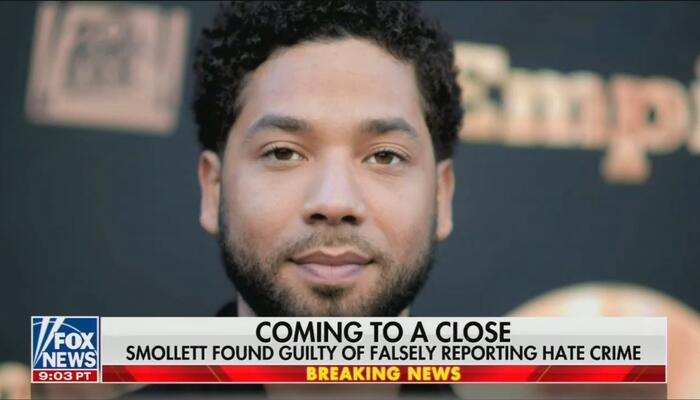 I wouldn’t write about the Jussie Smollett case and his conviction for lying about a hoax he perpetrated if it didn’t reflect something seriously wrong in the culture. Smollett was convicted in Chicago last week of faking an attack by a supposed Trump-MAGA man he claimed uttered racist and homophobic slurs.

Normally, I would ignore this story, along with other tabloid trash stories I don’t care about, such as the Kardashians, Harry and Meghan, “The Bachelor” and “The Bachelorette” TV shows and all things woke. In this case there is some significance because of what it tells us about the media and parts of the country that want to believe bad things about America before the facts are in and in too many instances after the facts are made known.

Predictably, in 2019, some secular progressives quickly fell in line behind Smollett’s claims, trusting in his word that he had been attacked because it fit their view of the country and what they believe is its tainted racial and bigoted past (and present).

If leaping to conclusions were an Olympic sport, gold medals would be handed out to the following (the list is not exhaustive):

Joe Biden for saying “What happened today to @JussieSmollett must never be tolerated in this country. We must stand up and demand that we no longer give this hate safe harbor; that homophobia and racism have no place in our streets or in our hearts. We are with you, Jussie.”

Then-Sen. Kamala Harris, who seemed to be channeling from the movie “The Manchurian Candidate” when she said: “@Jussie Smollett is one of the kindest, most gentle human beings I know. I’m praying for his quick recovery.” Harris added, “This was an attempted modern-day lynching. No one should have to fear for their life because of their sexuality or color of their skin. We must confront this hate.”

Asked to comment on these premature remarks, White House Press Secretary Jen Psaki said: “(everyone) learned a lesson” and the White House “respects the (jury) verdict.” Never mind their uninformed comments were the height of disrespect on many levels.

The medal presentations are not concluded. The reliably loquacious Rep. Alexandria Ocasio-Cortez (D-NY) called it a “racist and homophobic attack,” once again demonstrating her gift for sagacity.

Next to step up to receive her medal is Rep. Rashida Tlaib (D-MI), who said: “When one of the most famous black and gay men in America is not safe, the message is clearer than it has ever been. The dangerous lies spewing from the right wing is (sic) killing and hurting our people.” Fact check: These comments supporting Smollett before the trial came from the left wing.

Then we have the always unhappy and critical of all things America, Sen. Bernie Sanders (I-VT): “The racist and homophobic attack on Jussie Smollett is a horrific instance of the surging hostility toward minorities around the country. We must come together to eradicate all instances of bigotry and violence.” How about starting with the violence and looting in Chicago, Philadelphia and other major cities, senator?

One waits in vain for apologies from the many TV anchors, reporters, editorial writers and columnists who similarly jumped to conclusions about Smollett being a victim of racist and homophobic America.

After Olympic medals are awarded the national anthem of the gold medal winner’s country is played. In the case of this bunch, they would likely consider such a tune “racist and homophobic” and an affront to humanity and indigenous people.