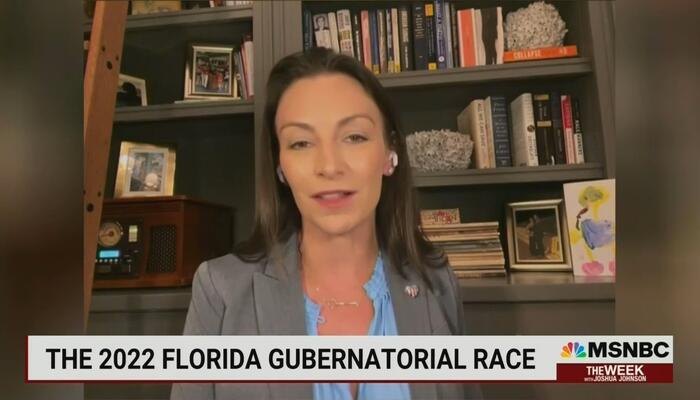 National media prove once again that bigoted statements from candidates are acceptable so long as they are targeted at the correct minorities. The latest case in point comes via Florida Democrat gubernatorial candidate and MSNBC regular Nikki Fried.

Fried’s recent interview for NPR’s The “Florida Roundup” was already controversial for her wild comparison of Florida Governor Ron DeSantis to Adolf Hitler, which included her wild claim that “I saw the rise of Hitler”. But listen to Fried as she dismisses GOP-voting Hispanics as gullible morons who don’t know who really has their best interests at heart:

MELISSA ROSS: What’s your appeal to Latin American voters? The Republican Party in the state has made significant inroads in that population.

NIKKI FRIED: And…and that is exactly the point. Is that they have had the wool pulled over their eyes about what exactly this radical right party is doing for them when the reality is it is the Democrats who are standing up for their freedoms, for their rights, for their opportunities to have success here in our state and in our country. They come here for a better way of life, and instead you have this rhetoric that is coming from the radical right of our state, especially Governor DeSantis, who is doing things that you’ll see that other countries in Latin America have done. You know, this governor has gone away from free market, attacking businesses for trying to make decisions on what they believe is right.

ROSS: You’re talking about businesses not being allowed to know people’s Covid status or mandate vaccinations. Things like that.

FRIED:  Things like that, too. And he actually went off- went even further a couple of weeks ago, and had a press conference where he actually said that he is going to try and eliminate diversity and inclusion training even inside of corporations- inside of businesses. When it is the corporations who have actually been the ones who have stepped up for the last few decades, trying to make sure that there is inclusion and diversity inside of the workforce.

Per Fried’s logic, Hispanics are not smart enough to easily discern that DeSantis is a Latin American-style strongman as evidenced by his unwillingness to allow schools to impose mask mandates or allow corporate HR departments to subject employees to woke propaganda and are, therefore easily manipulated into voting for Republicans via disinformation or propaganda. Now imagine the dudgeon had a Republican said anything remotely similar. The entire media apparatus would’ve run this story on a loop, with Univision and Telemundo putting it on their A-blocks.

It is, therefore, wholly appropriate to note that the same liberal corporate media that attempts to extract a racism out of DeSantis’ every utterance have allowed these bigoted remarks to go untouched and unchecked.