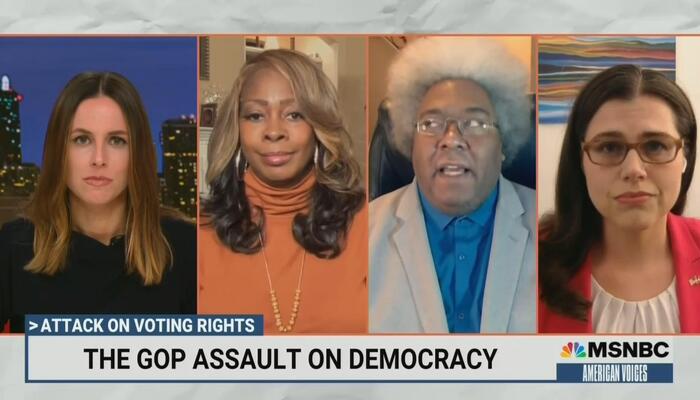 MSNBC contributor and Nation correspondent Elie Mystal has a reputation of spewing cockamamie claptrap, so it made sense on Sunday’s American Voices when he told host Alicia Menendez that Senators Joe Manchin (D-WV) and Kyrsten Sinema (D-AZ) “are the white people that Martin Luther King Jr. warned us about” as they’ve refused to kill the Senate filibuster to pass their party’s so-called voting rights agenda.

Following a clip of King’s granddaughter insisting the way to honor him would be to fight “repressive and suppressive voting rights laws,” Menendez — who’s the daughter of Senator Bob Menendez (D-NJ) — invited Mystal to opine on “what…this moment tell us about ourselves” because “[r]ather than talk about how we expand access, we are fighting over the bare minimum.”

Mystal didn’t waste time in reminding us of why he’s a racial arsonist:

He added that people should recognize that “[t]he chief architect of this assault on voting rights” isn’t David Duke or Senate Minority Leader Mitch McConnell (R-KY) but instead, Chief Justice John Roberts due to his role in cases that dealt with the Voting Rights Act in Shelby County v. Holder (2013), Rucho v. Common Cause (2019), and Brnovich vs. Democratic National Committee (2021).

How does Mystal propose this be remedied? Well, he stated support for things like the Freedom to Vote Act and the For the People Act, but maintained the true path would be to expand the Supreme Court to add progressives because “[a]s long as you let Republicans control the Supreme Court, you cannot have a fair and equal, just society.”

At the start of the segment, Menendez griped former Vice President Mike Pence decried Democratic proposals on voting as a “federal power grab over state elections” when “[t]he truth is the real power grab is coming from Republicans at the state level, and it’s not just ballot access,” but with “new laws to control the process of counting and certifying votes” so they can steal future elections.

Frequent CNN and MSNBC guest LaTosha Brown of Black Votes Matter was also on hand and demanded Manchin and Sinema be made to “care” about their agenda and vote to enact it, adding the debate is a reminder of the “need” for “structural change” in America in the form of making Puerto Rico and Washington D.C. states and packing the Supreme Court in order to truly become the country “laid out in the Constitution.”

This divisive, racist venom was made possible thanks to the endorsement of advertisers such as Liberty Mutual and Pfizer. Follow the links to see their contact information at the MRC’s Conservatives Fight Back page.

To see the relevant MSNBC transcript from January 16, click “expand.”

ALICIA MENENDEZ: Meantime, in a column for The Washington Post, former Vice President Mike Pence accuses Democrats of attempting a, “federal power grab over state elections.” The truth is the real power grab is coming from Republicans at the state level, and it’s not just ballot access. GOP-led states have passed new laws to control the process of counting and certifying votes. Republicans are also proving unfair district maps to dilute the power of voters of color. Ari Berman with Mother Jones writes, “what can appear as a series of disconnected state-level skirmishes is in fact part of a national strategy that goes far beyond previous efforts to undermine democratic influence. Fueled by the Big Lie, this effort picks up where last year’s insurrection left off by putting in place the pieces to steal future elections by systematically taking over every aspect of the voting process.”

MENENDEZ: Senator Sinema drew a line in the sand, letting us all know the math is not going to be there to get this legislation across the finish line, so explain to me what the path forward is.

LATOSHA BROWN: Yeah, I think what we have to do continue to put pressure — put pressure on her and others. I know there are people saying, “well, she doesn’t care. She doesn’t care what happens.” And we got to make her care, right? And not just her. I think that this isn’t just about Manchin and Sinema. While, both of them have been extremely disappointing, I think in many ways, they have been disingenuous, particularly talking about their support for voting rights or that — at one point, she voted for — she wanted — she said that — that John Lewis was her hero. But here she is standing in the way of the very thing that he gave his life for. She is a hypocrite, she is dishonest, she — and she lacks integrity, but I still think we need to hold her to account, account to the voters in Arizona. We just left Arizona. People are very, very upset with her and we’re going to make sure we lift that voice in that process to let her know and I think that your path forward is not just we have to focus on — we have to focus on all of the Senate. We have to focus on the 16 Republican senators that actually voted for the reauthorization of the voting rights bill. What has happened since that time, to this time that they would cower in the face of a Big Lie that has taken root in this country? We’ve got to hold them all to account.

MENENDEZ: Eli, what does this moment tell us about ourselves as a nation? Rather than talk about how we expand access, we are fighting over the bare minimum.

ELIE MYSTAL: Yeah. Look, the people like Joe Manchin and Kyrsten Sinema — these are the white people that Martin Luther King Jr. warned us about. These are the white liberals who have no sense of urgency, commitment, or integrity when it comes to the progress of justice in the country and that’s just the — that’s just the fact. I don’t know if they can live with themselves with that but that is — that is the reality of the situation. The other reality here — and — and Bernice, um, mentioned it in that clip. The chief architect of this assault on voting rights is not Mitch McConnell. It’s not David Duke. It’s not whatever boogyman you think is hiding under the — under the — under the closet. The chief architect is Chief Justice John Roberts. It is he, who has been an enemy of voting rights and racial equality from his very first job out of law school, which was to oppose the 1982 amendments to the Voting Rights Act. It is John Roberts who authored Shelby County v. Holder in 2013, which eviscerated Section V of the Voting Rights Act, which is basically why we’re here right now. It is John Roberts who authored Rucho in 2020 which swung wide the doors toward gerrymandering and it’s John Roberts who provided the crucial fifth vote in last year’s Brnovich decision which eviscerated Section II of the Voting Rights Act. This has all been done by Federalist Society conservatives that have been put on the Supreme Court and until we stop them — until we do something about the Court, you want to pass your Freedom to Vote Act? I think that is a great bill. We should pass it. I think we should have passed H.R. 1, but always remember that John Roberts and his conservative cronies are waiting at the Supreme Court level to strike down whatever laws we put forward. As long as you let Republicans control the Supreme Court, you cannot have a fair and equal, just society.

BROWN: What we are seeing is all across the board, what they’re doing, they’re instituting it, um, on all levels. The local, the state, and the federal level which is why we need federal legislation, but as we think about going forward, that’s a short-term. That’s the short-term solver. We actually need structural change in this country. We need to rethink about the Supreme Court. The Supreme Court should be expanded. We need to make sure we have a Senate that is more reflective of the citizens of this country, which means we need D.C. to have statehood, for Puerto Rico to have statehood. Why are we expecting taxation without representation? And so, we’ve got to really understand that in order for us to have the kind of democracy that’s laid out in the Constitution, we are going to have to have real, systemic, and structural change in this country.