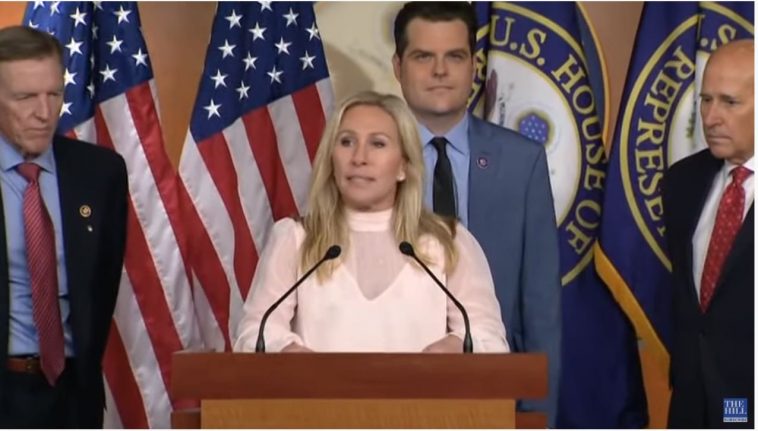 Rep. Marjorie Taylor Greene (R-GA) and fellow Republican lawmakers Matt Gaetz, Louie Gohmert, and Paul Gosar, held a news conference on Tuesday to share a report on the cruel treatment in the DC Gulag. Greene and her fellow lawmakers released their findings that detail the treatment of defendants jailed for their participation in the Jan. 6 attack on the U.S. Capitol.

Marjorie Taylor Greene opened up the event by pointing out to the press that in 2020 there were over 500 BLM-Antifa riots in 2020.

Black Lives Matter-Antifa mobs caused over one to two billion dollars in damages in cities across America since May. In Minneapolis alone, Black Lives Matter mobs damaged or destroyed over 1,500 businesses or buildings. Today MTG called the J6 investigation a witch hunt on Trump supporters.  As for the abuse and unconstitutional treatment of J6 prisoners, Greene called the abuse of the Trump supporters are being beaten, labeled supremacists, denied haircuts, and bail.  It is unconscionable.

Today, I released Unusually Cruel: An Eyewitness Report From Inside The DC Jail.

The J6 prisoners have no idea when they are going to court.  They have no ability for a bailout.  No ability to see their family.  They are being mistreated and abused more than we treat terrorists.

In the report released today the guards continued to argue with the US Representatives about seeing the J6 prisoners. These are not good people. (page 13-14)

This is a group of men who have no idea of when they are going to court, no ability to bail out, no ability to see their family, and being mistreated and abused worse than terrorists at Gitmo.

This is a horrific report. What they are doing to these Trump supporters is unbelievable.