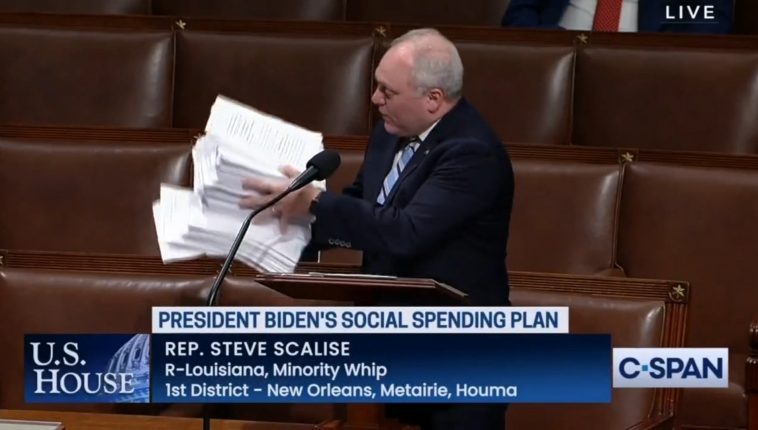 Scalise blasted House Democrats for voting on the disastrous social spending bill in the dead of night, pointing out that lawmakers had been in session since 8 AM in the morning, which had been 13 hours prior to him speaking, and they were just beginning to “get into the details” of the massive 2,300+ page bill.

Most importantly though, he used the bulk of his time to expose as many horrifying policy changes in Biden’s radical agenda as he could, which include mass amnesty for illegal aliens, an ‘army’ of new IRS agents to comb through citizen’s bank accounts, insane natural gas taxes that would increase average household energy costs by 30%, and trillions of dollars in spending that would lead to trillions in new debt and taxes.

He also warned an estimated 7 million illegals will be granted amnesty at the same time Biden is passing out nearly a half-million dollars to illegals for breaking our laws.

There have already been record-shattering numbers of illegals coming across the border under Biden’s sham presidency, how many more will come running once he starts handing out the half-million-dollar checks and is able to grant amnesty like he is giving out candy?

It’s a socialist takeover of America.

No wonder they’re doing it in the dark of night. pic.twitter.com/bvZ4v4BJ23

Scalise only had 3 minutes to speak, so he was only able to uncover the tip of the iceberg when it comes to this destructive spending package and its crippling effect on everyday Americans – they will be paying the price for decades to come if it becomes law.

As he said, it’s no wonder they are hiding this in the dead of night.