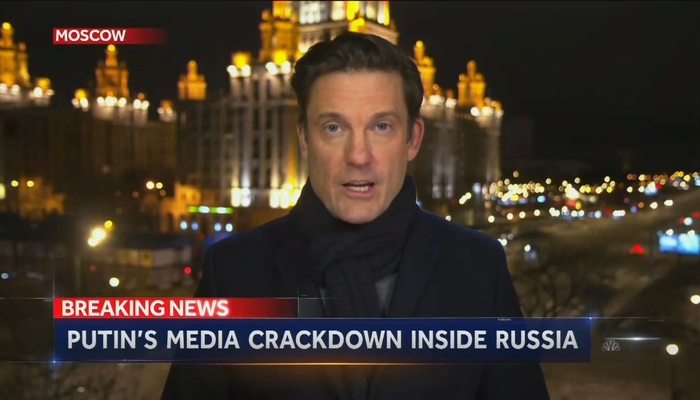 After NBC’s Today skipped on Friday morning the frightening news that Russia had criminalized reporting basic facts about their war on Ukraine, NBC Nightly News gave the story 55 seconds of muted coverage hours later, possibly due to the fact that they were still reporting from Moscow as other western networks ceased reporting there and not risk prison sentences of up to 15 years.

Meanwhile, ABC’s World News Tonight revealed their team had stopped reporting in Moscow due to the law and the CBS Evening News was the lone broadcast network newscast to highlight the horrifying video of a Sky News team facing a barrage of repeated gunfire in Kyiv from Russian soldiers (despite identifying themselves as journalists).

Nightly News anchor Lester Holt told viewers that Russia and dictator Vladimir Putin were “taking harsh new steps tonight to control messaging about the war, including a press crackdown that has prompted some international news organizations to suspend operations there.”

Senior international correspondent Keir Simmons tacked the crackdown on free and independent press on the end of a segment about the latest on Putin and the Kremlin.

Notice how careful Simmons was in his wording so as to not to put himself in jeopardy:

[Putin] signing new law passed by parliament making it illegal to distribute so-called “false information” about the military operation: calling the operation in Ukraine an invasion or a war could be illegal. Breaking the law could result up to 15 years in prison. Meanwhile, Facebook was officially blocked by Russia’s internet regulator, and Twitter has been restricted, according to state media. And tonight, more independent news organizations have been taken off line here, including the BBC’s Russian service, a state-funded German channel, and Radio Free Europe.

On ABC, World News Tonight anchor David Muir said from the Ukraine-Poland border that Russia’s law would mean “[j]ournalists…fac[e] up to 15 years prison for so-called fake news, anyone spreading what the government deems as ‘false information,’ potentially for using like words like war and invasion.”

She then told ABC viewers that the network had joined other networks such as “CNN, Bloomberg, and the BBC” (click “expand”):

BRUCE: Some western networks, including ABC News, are now not broadcasting from the country.

BBC NEWS INTERIM DIRECTOR JONATHAN MUNRO: We don’t want to find that out the hard way, by finding that someone has said something which we believe to be true or used words which are now outlawed like “war” or “invasion,” and find that we’re then punished in a completely draconian and unacceptable way.

MUIR: Mary Bruce joins us from the White House. And Mary, we’ve now seen several news organizations pause their broadcasting from Russia, and, of course, we know that includes ABC News.

BRUCE: David, because of this new censorship law passed in Russia, we are now seeing some western networks including CNN, Bloomberg, and the BBC, and, of course, our very own ABC News team not broadcasting from Russia. An ABC News spokesperson adding, “we will continue to assess the situation and determine what this law means for the safety of our teams on the ground.” The White House tonight telling me the Russian people deserve to know about the death and destruction being inflicted by their government on the people of Ukraine. David.

“[T]he safety and security of our team is paramount,” Muir added.

And moving to CBS, Evening News anchor Norah O’Donnell said “a new iron curtain has fallen in Russia, and this time, it’s an information iron curtain.”

Speaking of the genuine crackdown on freedom of speech and the press, O’Donnell said the Kremlin’s blocking of social media platforms and shuttering all “independent media outlets” were reasons “why most Russians don’t know what’s really happening in Ukraine.”

Foreign correspondent Roxana Sabieri said from London that “many Russian journalists are fearing for their safety” with “[s]ome hav[ing] already fled the country this week” and “others…now packing up and getting ready to go.”

Earlier, O’Donnell and foreign correspondent Charlie D’Agata broadcast the chilling scene in Kyiv of Sky News correspondent Stuart Ramsay and his team being attacked in what O’Donnell described as “Russian troops ambushing journalists.”

D’AGATA: In a dramatic example of the violence in unpredictability here —

D’AGATA: — our colleagues at Sky News —

D’AGATA: — were ambushed on the outskirts of the city, dozens of bullets tearing through the car.

D’AGATA: Now, in terms of that Sky News team, we’re happy to report that they’re all okay. I got in touch with Stuart Ramsay. He’s the correspondent. He’s a good friend of mine, right after I heard, he said there must have been 100 bullets that went through that van. He did get hit. He was treated in a hospital. He and his colleagues are all safe and they’re back in the U.K.

After years of the liberal media painting a dystopia in which the Trump administration would be behaving this way toward journalists, it’s necessary for all parties to condemn this act against innocent people, regardless of their political ideology.

To see the relevant transcripts from March 4, click here for ABC, here for CBS, and here for NBC. 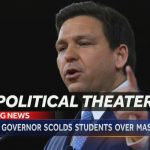 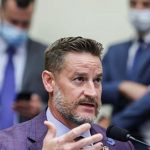