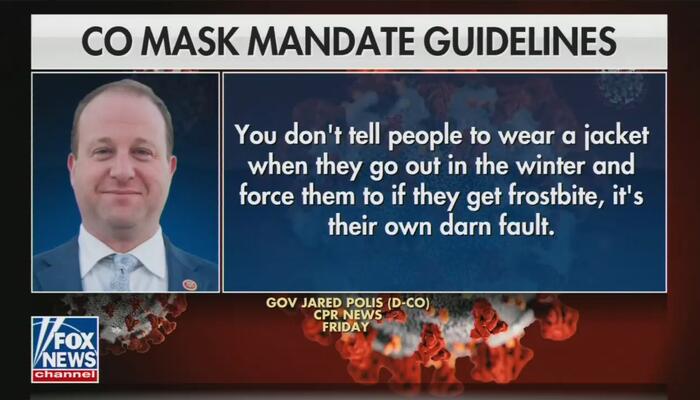 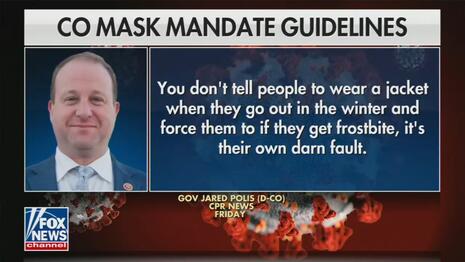 While ABC’s World News Tonight, CBS Evening News, and NBC Nightly News spent part of their Monday newscasts touting Democratic states like California and New York reinstituting mask mandates, none of them mentioned Colorado’s Democratic governor, Jared Polis declaring “the emergency is over” and saying that he wouldn’t enforce a mask mandate; just as he wouldn’t force people to wear jackets in the winter.

Polis’s comments were made to Colorado Public Radio on Friday but had only just percolated up to national attention on Monday. And his argument was simple: it was people’s own responsibility to protect themselves from Covid and it wasn’t the government’s job to babysit them.

“You know, public health [officials] don’t get to tell people what to wear; that’s just not their job,” he said. He also seemed to warn that forcing mask mandates could be a slippery slope to permanent masking. “Public health [officials] would say to always wear a mask because it decreases flu and decreases [other airborne illnesses],” he told interviewer Ryan Warner.

He compared telling people to wear masks at this point was like telling them to wear a jacket in the cold of winter:

“If you haven’t been vaccinated, that’s your choice. I respect that. But it’s your fault when you’re in the hospital with COVID,” he added.

With Polis’s decision to bolster their arguments, the New York Post Editorial Board penned a piece Monday night calling on New York Governor Kathy Hochul to do the same.

“Spot on. Pols need to let people make their own COVID decisions, right or wrong — especially since the unvaxxed are no longer much of a health threat to the rest of us,” they wrote. “Alas, Dems like Hochul just can’t resist socking the public with new restrictions, even when much of the population (80 percent in New York) has been vaccinated and more are naturally immune thanks to past infection.”

Concluding: “The gov should take a tip from her Colorado colleague: The emergency is over. It’s time to move on. Stop ordering extreme measures that do no real good — other than letting you claim you’re ‘leading.’”

But that’s not the narrative the liberal networks want. They need people to be afraid.

The network blackout of this Democratic governor bucking the narrative was made possible because of lucrative sponsorships from Wayfair on ABC, Consumer Cellular on CBS, and Ford Motor Company on NBC. Their contact information is linked so you can tell them about the biased news they fund.