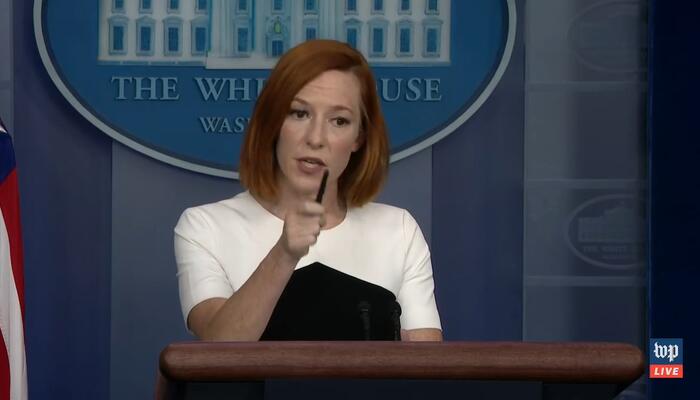 During Monday’s episode of The Psaki Show, New York Post reporter Steven Nelson made the most of his infrequent opportunities to question Press Secretary Jen Psaki by invoking news about Hunter Biden’s Chinese business dealings and Miranda Devine’s new book about Hunter’s laptop. However, Psaki wanted nothing to do with either of them

Nelson began by citing a new and “big report” out of the Biden administration concerning “corruption” as a way of asking “two quick and hopefully pretty easy questions about that” (which ironically cited art sales as a key vehicle for money laundering).

For his first question, Nelson wanted to know if she’d “commit to basic transparency about…the name of the buyer, the dollar amount, and the timing” of Hunter Biden’s attorney announcing his client had “finally divested from a Chinese investment fund controlled by state-owned entities” only “shortly after President Biden’s virtual meeting with the Chinese president.”

Predictably, Psaki dismissed its importance since “the President’s son is not an employee of the federal government, so I’d point you to his representatives.”

As for the Devine book The Laptop From Hell, Nelson said he “was hoping that you could confirm that the laptop is indeed authentic and not Russian disinformation as you seemed to suggest on Twitter last year.”

Psaki’s answer? She was even less interested: “And, as it relates to the book, I have neither had the time nor interest in exploring or reading the book.”

Nelson attempted to follow up, but Psaki wanted to go to the next reporter, arguing she had “answered your question” and reiterated he “can go to the representative of the person who’s not an employee of the federal government.”

Meanwhile, the briefing largely focused on two other U.S. adversaries in China as it relates to the 2022 Winter Olympics and Russia amid concerns it could soon invade Ukraine.

Psaki had confirmed reports at the top of the briefing that the U.S. would be boycotting the Olympics, but only on a diplomatic basis, meaning athletes will still compete, but there won’t be a presence from the U.S. government (e.g. the president, vice president, the First Lady, cabinet secretaries, etc.).

CBS’s Nancy Cordes wanted to know whether the Biden team “consider[ed] going a step further in barring U.S. athletes” and why they didn’t go that route, but Psaki maintained this action was plenty stringent as it “sends a clear message that we cannot conduct ourselves with business as usual” amid China’s rampant human right abuses while also not penalizing athletes.

ABC’s Cecilia Vega and Cordes both asked important questions about whether a Russian invasion could mean sending U.S. troops into the region (and thus possibly dragging the U.S. into a new war), but Psaki refused to give them an answer.

The strongest Russia questions from where one least expected it in NPR and correspondent Mara Liasson, who correctly called out the administration’s posture as similar to that of the Obama-Biden administration in 2014, whose actions did nothing to deter Vladimir Putin from sending his military in to seize Crimea (and render the eastern half of the country disputed territory) (click “expand”):

LIASSON: You mentioned that — that Biden was obviously deeply involved with the Ukraine in 2014.

LIASSON: I’m wondering if you could talk about what his takeaways are from that experience because a lot of the things that he’s saying this time — supporting allies on the eastern flank, sanctions, those sound like those same things that you guys tried to do in 2014 and it didn’t stop Russia from taking Crimea. So, what’s — why does he think this will be different?

PSAKI: Well, first, our objective at this point, Mara, of course, is to prevent them from moving forward —

PSAKI: — and to convey on the front end that we have been working in lockstep in coordination with congress, with countries, our NATO partners, with transatlantic partners, to prepare a arrange steps that could be detrimental to the economy. I would say that there are some — certainly things that we have watched and seen that we certainly saw back in 2014, a massive spike — more than tenfold — in social media activity pushing anti-Ukranian propaganda, approaching levels last seen in the lead up to Russia’s invasion in 2014. That is something that didn’t have a lot of past precedent at the time, but, to us, we see that as indication of efforts to influence inside and outside of course, as well. We’ve also seen evidence, as we’ve noted here, of Russia making plans for significant, aggressive move against Ukraine. So, I would say our objective or the President’s objective is to, on the front end, always lead with diplomacy, have those conversations. We’re having them directly with Russian leaders. The secretary of state obviously met with his counterpart last week and we’re having those at a range of levels. The President’s speaking with President Putin tomorrow. But in the meantime, to prepare a range of options should they decide to move forward.

LIASSON: But why do you — why will your efforts this time be more successful than last time? Why do you think they will be?

PSAKI: We’ll we will see if they are. But the objective first and foremost is to prevent the move forward, the military progression that we saw happen in 2014.

With Peter Doocy having taken his turn last week on The Psaki Show, Monday saw his Fox colleague Jacqui Heinrich return to their spot with questions on crime and a much-lampooned tweet from a Kamala Harris official insisting he loves his job just as top officials are departing in droves (click “expand”):

HEINRICH: On that violent crime spike that we’ve been seeing, there have been smash and grab robberies, there was the pretty alarming murder in the wealthy Hollywood neighborhood last week, and then an attack — a violent robbery in Pacific Palisdes on Friday. This is sort of similar to the crime spike that we saw over the summer and one of the president’s biggest push is to address that was the DOJ strike teams that were sent out to those five cities. It was D.C., New York, Chicago, L.A., and San Francisco. Since those strike forces were assembled in July, have they accomplished anything?

HEINRICH: And real quick, I just want to ask about The Washington Post article — there’s another article that’s come out after a string of articles detailing dysfunction in the Vice president’s office. And then the director of operations put out a tweet today talking about much he loved his job. There was a similar sort of social media push this summer following some negative headlines about ongoings in the Vice President’s office. Did anybody ask the deputy director to put out a positive tweet today or was that all him?

To see the relevant transcript from December 6’s briefing (as well as a question from April Ryan about the Department of Homeland Security’s probe into border agents), click here.